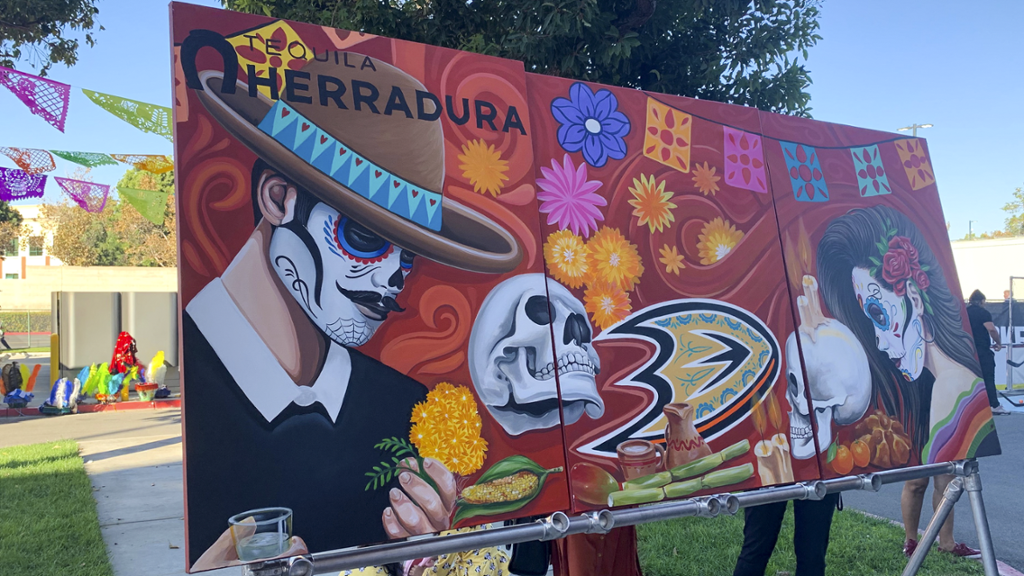 A tattoo artist and artist by trade, Jaimes recalls when the Ducks came to town in 1993 and how he felt “instantly hooked” after watching his first game. He recalls an early love of goalkeepers because “they were the ones who had the artwork on their masks”.

“That’s what got me into hockey,” Jaimes said. “I like the history of hockey, how old it is. I like the teams, the uniforms and the logos.”

Jaimes designed the warm-up jerseys the Ducks will wear before the game on Sunday night, an admittedly surreal experience after drawing the Mighty Ducks logo thousands of times in the yards over the years.

“It’s going to be unreal to see them for real,” Jaimes said with a big smile. “I would love to have this in my family history. Seeing the photos and bringing them to life in front of me, I am incredibly proud and thrilled to be a part of this.”

Jaimes knows the moment to see the Ducks come out of the tunnel and onto the ice in his jerseys will be emotional.

“I’m shaking now just talking about it,” he said. “I can only imagine the feeling. It’s going to be very surreal. I can’t say how it’s going to hit me. Like wow, it’s real. I never, ever imagined this in my wildest dreams .”

He said the theme of remembering the holidays inspired him to create a shirt featuring the club’s original logo combined with the celebration’s classic use of bright and vibrant colours.

“You honor the past and you don’t forget your loved ones,” Jaimes said. “Now is the time to be joyful, to remember them and to have a good time.”

Jaimes is also proud to be a key part of an evening meant to welcome more new fans into a community he loves.

“To see my friends represented in their culture is amazing,” Jaimes said. “I’ve always appreciated the support that the Ducks give to that and to the community, keeping the traditions alive and exposing them to people who don’t know, showing the history. It’s a huge role.

“I think it brings in people who had no idea they could be represented by a sports team, you know? Especially if it’s their local team, like that. It makes people become hockey fans and want to be part of it.”

Jaimes, who also designed a Dia De Muertos poster for the Ducks in 2019, also hopes to be back for more in the years to come.

“That’s how you make a change,” he said. “You want to have people that you can relate to…To be able to be with like-minded people and people who look like me, it’s amazing. You don’t feel so alone. You feel like to know that and it’s such a beautiful connection.”

Duran and Herrera are known as the “Heavy Collective”, traveling the West Coast and specializing in custom art.

Based in downtown Santa Ana, the two have been everywhere from San Diego to Los Angeles to Mexico City, working with universities, corporations, and recently even the Santa Ana Police Department.

They describe their style as unifying and organic, a mix of fine art and cutting edge.

“We use a lot of movement, and the reason a lot of people come to us is because we engage with communities and tell a lot of stories,” Duran said. “We never want to make anyone feel uncomfortable. Our art is not controversial. It is unifying. It brings people together. It transforms spaces.”

“Universal would be a good way to put it,” added Herrera. “It cannot be interpreted as any kind of negative.”

After Ducks management viewed the collective’s downtown Santa Ana mural, Duran and Herrera were asked to create the promotional poster for tonight’s celebration. They both said the priority was to ensure their design represented the sanctity of the holiday.

“When I develop the work, I try to always keep in mind and keep in mind where it comes from,” Herrera said. “I’m trying to do it justice. I consider it something that’s sacred to a lot of people. People literally go out of their way to change their family members and pay homage and dedication and dedication to that…You’re showing respect and homage, but at the same time there’s a deeper meaning behind it.”

“It represents embracing my roots and where I come from,” Duran said. “It’s exciting to see that it’s more accepted to practice these traditions and to evoke that in people of all colors.”

Herrera said he hopes those unfamiliar with the history of the holiday will take a moment on Sunday to take it all in and observe the beauty of the art.

“At the end of the day, art is beautiful, whether you understand it or not, that’s the beauty of art,” Herrera said. “You can interpret it any way you choose. That’s why often when we produce art, we never really put words into it to let the viewer know there’s no right or wrong answer. You can interpret it as you see fit.

“You’re here for the hockey. It’s great. But you can see a different twist and say, wow, that’s interesting. It takes you out of your comfort zone and out of the norm…Enjoy the game and of what you’re here to do and we’ll kind of give them a different perspective.”

Ortiz proudly followed in his father’s footsteps. Son of a mural artist now specializing in the same trade, Ortiz’s latest creation will be exhibited in front of the Honda Center on Sunday.

“I wasn’t a bad student, but it was difficult for me to retain information for tests and homework, but when it came to drawing, I was so comfortable,” Ortiz recalls. “I was like, ‘wait a minute. I want to be like my dad.’ I started noticing that my drawings were pretty good, so I decided that was what I wanted to do.

“The feeling is special. People appreciate it. They appreciate the art.”

Ortiz, who loves drawing animals above all else and decorating his house with his fiercest depictions as motivation, is now on the other side of the mentor-mentee relationship, teaching his two daughters to paint.

“They love it now,” he said with a grin from ear to ear. “They start with their pencil work and start painting in acrylics. It’s just amazing.”

There is, however, a downside to new helping hands around the house.

“They write everywhere,” laughed Ortiz. “You think you can be prepared as a parent, but with the paintings, they’re going to write on the walls, on the couch, on the floor. They won’t care.”

Ortiz said that Sunday’s mural helped him learn more about the holiday’s history and fostered a greater appreciation for those who came before it.

“It’s about celebrating life,” he said. “It takes you back to when you were a kid… That’s what I want the work to express.

“It’s a pleasure, more of an honor, to be a part of it. We bring culture together, bring more people together. You pay attention to others. I appreciate that.”