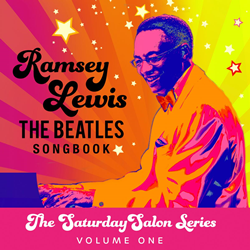 [The Beatles] have a catalog of songs that can come across as fun to play standards and fun to play solo. I don’t know of any other pop group whose music has been recorded on all levels like this.

The late legendary pianist Ramsey Lewis offers an intimate and familiar affair with his solo piano recording “The Beatles Songbook: The Saturday Salon Series, Volume One,” which will be released January 6 on Steele Records. This selection of tracks from the iconic songwriting duo of John Lennon and Paul McCartney, approved for release by Lewis, is also a surprising DIY project, created during live-streamed sessions at Lewis’s own Chicago home.

Lewis, of course, is no stranger to postwar pop music coverage. He had a resounding success in 1965 with his cover of Dobie Gray’s “The In Crowd”, which he followed with a successful version of “Hang on Sloopy”. He’s even tested the Beatles catalog before, scoring a minor hit with “A Hard Day’s Night” and even releasing “Mother Nature’s Son”, a homage to the Beatles’ White Album, in 1968.

He was, however, a latecomer in unaccompanied piano performance. Until recent years, Lewis had hardly ever performed as a soloist. But the COVID-19 pandemic made it impossible to do anything else, and during the shutdowns Lewis launched a series of monthly webcasts called “The Saturday Salon.” Always an artist with a populist twist, Lewis included Beatles songs in his webcasts because it was music that, like his own, had demonstrated universal appeal.

Even with their exhaustive coverage, Lewis is able to unlock new secrets and breathe new life into the tunes. His “And I Love Her” explores the possibilities of the song’s harmonies and its famous four-note riff. “Rocky Raccoon” gets a nice reharmonization. Lewis plays the gospel roots of ‘Hey Jude’ and in the ballads ‘Blackbird’ and ‘Golden Slumbers’ he finds previously unknown reservoirs of blues.

Taken straight from 2020’s live audio, “The Beatles Songbook” sounds like the home recording it is. But this sound is a feature, not a bug: it amplifies the intimacy of the performance, as if we were hearing a message from a friend, and reminds us that until the end, Lewis was able to work in all circumstances and create great art. .

Ramsey Lewis was born on May 27, 1935 in Chicago. He started playing the piano at the age of four, learning classical from teachers, gospel in church, and jazz from his father’s record collection. At Wells High School and Chicago Musical College, he intended to become a classical concert pianist, but fate intervened: While working at a record store, Lewis met bassist Eldee Young and drummer Red Holt, other jazz enthusiasts who joined him to form the Ramsey. Lewis Trio.

In 1965, after a decade of collaboration both at bandstands and on Leonard and Phil Chess’ Argo Records, Lewis and the trio achieved a surprise pop top 10 with their version of “The In Crowd”, recorded live. in Washington DC. The record made Lewis a star, which he added to with subsequent hits “Hang on Sloopy”, “A Hard Day’s Night” and “Wade in the Water”. After the trio disbanded, Lewis continued with new ensembles and continued to pursue pop-jazz success, resurfacing the pop charts with members of Earth, Wind & Fire on “Sun Goddess” in 1974. His popular hit continued into the 1980s and 1990s, when he formed the popular crossover band Urban Knights.

In the 21st century, Lewis has become a revered jazz statesman, finding a career renaissance as a composer, broadcaster, educator and artistic director of the Ravinia Jazz Festival. Lewis was awarded the NEA Jazz Masters scholarship in 2007. He spent his final year working with journalist Aaron Cohen on his memoir, “Gentleman of Jazz” (forthcoming May 2023 by Blackstone Publishing), before passing away at his home from Chicago in September. 12, 2022.

Share the article on social networks or by e-mail: