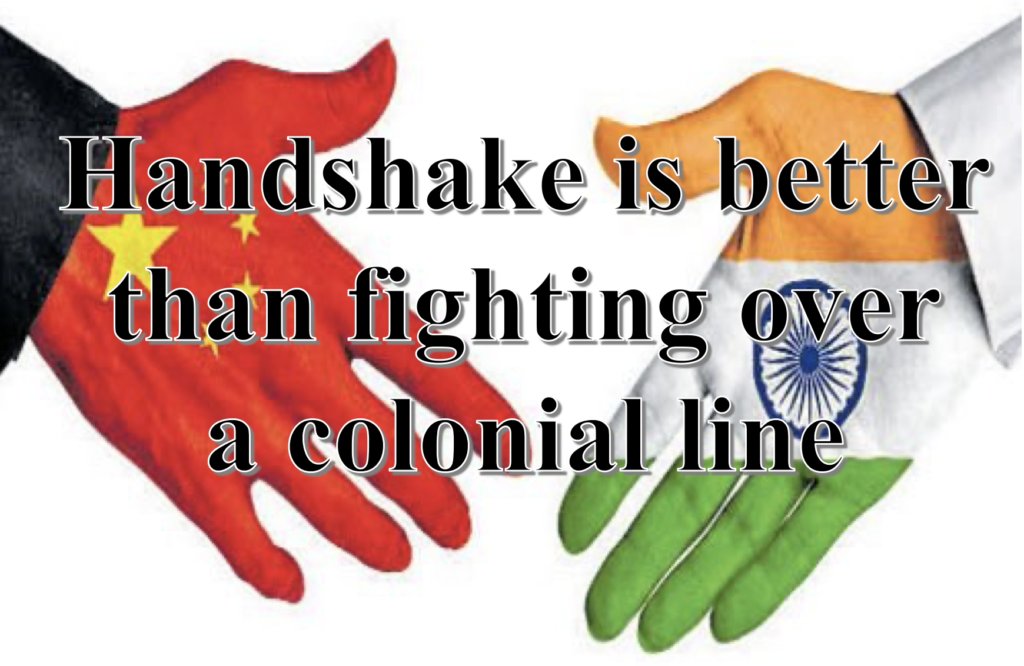 China has a history of over 3500 years. India’s history dates back to the Indus Valley Civilization. India received its name from the British in 1947. The population of Asia is 4.5 billion, of which 2.7 billion are Chinese or Indian. China and India are key players in Asia. The Asian continent can be strengthened by the unity of India and China. Unity means power and power means the ability to meet challenges and threats. This is why colonial policies of divide and rule were deployed to divide the invaded nations and peoples. It was the colonial division that led to the Indo-Sino War in 1962. Artificial pencil line prevents China, India from rebuilding ties. The situation worsened as the neocolonials charged local neoliberals to continue to divide and rule and these people are creating tensions to prevent cordial ties between India and China. India is powerful, China too. India will not become more powerful by trying to destroy China or by joining China’s enemies. If so, China’s enemies will use India not only to balkanize China, but end up balkanizing India. What is the price of India’s fake friendship with countries that India cannot really trust? When neighboring nations are weakened, won’t that have an impact on one’s own country? Who seeks to weaken neighboring countries and why? When countries are weakened, who ultimately benefits? The one who planned it all! It’s been 60 years since the Indo-Sino war and it shows how caution has played a key role. Caution must now shift to 60 years of collaboration between India and China.

Does what makes China powerful threaten nations that thought they were still powerful?

China has more ships than the German, Indian, Spanish and British navies. This gives China the ability to control the oceans. With that come bases and logistics hubs. It is to prevent them that the anti-Chinese camps form alliances. Including India in the alliance was the icing on the cake. All their dirty work is now outsourced to India. But what does India ultimately win? Does India think India really belongs in ‘their club’. India might like to watch the fate of Rishi Sunak to fulfill its own destiny. At what cost does India’s allegiance to the West join with Japan which really had no choice given its subordinate role after the World War where even the constitution of Japan was written by the West . Japan’s inability to withdraw US troops from Okinawa shows how “independent” Japan is.

Has it occurred to India that the West’s use of Church, Diaspora LTTE, UNHRC and ‘minority Tamil’ card is a step towards this goal ultimate ? The West did not chop up its options on the balkanization of India as it did with the Soviet Union and Yugoslavia. Already, many UN goals and programs are in line with the creation of microstates while promoting corporate civil society governance by abandoning the Westphalian system of governance. Much propaganda is directed towards this end.

India must face the threats. Which is a bigger threat to India realistically. India and China are key trading partners. Both have the largest populations in the world. People are power. Both have nuclear powers.

Indians make up 18.3% of international students in the United States

Together, Indians and Chinese make up nearly 10 million of the 329.5 million people in the Americas. Many Indo-Chinese Americans also hold high-level government positions. Although they are from India or China, they think, act and function more than Americans.

Would the United States stop trading with China? Take a list of American companies relocating to China – http://www.jiesworld.com/international_corporations_in_china.htm

Did you also know that

There are many more such Chinese investors in the United States.

Likewise, although many people think that the relations between India and China are cold, it is quite the opposite.

China has become one of the top 10 educational destinations for Indian students.

China offers Indian students scholarships in a variety of subjects and the cost of living is much lower than in the US, UK and Europe. China also offers jobs.

The policy ends up hurting good relations as Indian authorities refused to accept degrees awarded by Pakistan, unlike Chinese applications banned by India.

Culturally, too, India and China remain close – the 1988 Cultural Cooperation Agreement guarantees the holding of large-scale festivals, art exhibitions, exhibitions and films in each other’s countries.

Why do the media lie? Why do propagandists try to show a different picture of what is happening on the ground and what is statistically proven?

Who benefits when India and China are at odds?

Where is the voltage source?

On October 20, 1962, the Indo-Sino War began when the Chinese army invaded Ladakh and crossed the McMahon Line. The war ended a month later. India became a republic in 1947, and the People’s Republic of China was formed in 1949. Tibet became the contentious issue that soured ties and led to eventual war.

India and China may remember that India did not attend a conference because China was not invited. India even bothered to speak on behalf of China which had been isolated. The two countries cannot forget the Five Principles of Peaceful Coexistence from 1954 when India recognized Chinese rule in Tibet.

Thereafter came a steady stream of contentious incidents – problems with maps, the welcome given to the Dalai Lama after he fled India from Tibet in 1959, China blaming the Lhasa rebellion on India and the latest altercation in Galvan.

Sir Henry McMahon, the Foreign Secretary of British India, decided on the 890 km line separating India and China after the 1914 Treaty of Shimla between India and Tibet. China does not accept the line because China was unaware of the agreement and China is not bound by it.

India and China have been bickering for 108 years over a line drawn by colonial Britain. Then British Foreign Secretary David Miliband apologized to China on October 29, 2008.

Now is the time for India to ask whether it wishes to continue to embrace British colonial heritage or find an amicable settlement with China. As long as problems prevail, outside forces will attempt to stir the pot of conflict. That’s what the teams in India and China need to realize.

It is in the interests of both nations not to allow third parties to interfere.

Enemy initiatives in Asia will get no Asian nation anywhere. India, China and Japan are powerful in their own right – they don’t need to be backed by Western alliances. It is time for Asia and Asians to realize their power and build on their terms and not those artfully imported and articulated by forked tongues.

First day of school for the new Capstone Academy in Fargo