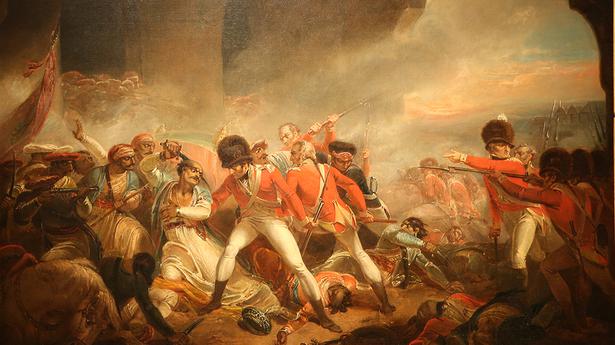 The painting of Tipu Sultan by Henry Singleton now in India

Giles Tillotson, curator of Tipu Sultan: Image & Distance, a New Delhi exhibition on the visual history of the Anglo-Mysore Wars, explores the public narrative surrounding these events over two centuries

Giles Tillotson, Curator of Tipu Sultan: Image & Distance, an exhibition in New Delhi on the visual history of the Anglo-Mysore Wars, explores the public narrative surrounding these events over two centuries

It is art taken from the soil of the Deccan but painted in Georgian London in 1800 by an artist who had never visited India. And yet, in colors so precious and reminiscent of the subcontinent, Henry Singleton captures the downfall of the ruler of Mysore in the last effort and the downfall of Tippoo Sultaun. In it, smoke belches and horses and bodies fall as British Redcoats fire at the Mysore army rallying around a frayed standard. Tipu, an implacable enemy of the British East India Company, has his sword raised, even as he meets his death, in what is a scene depicting the fall of Srirangapatna in the Fourth Mysore War (1799).

The painting which was made for a British audience spent its entire 200 years in England but is now in India after art company DAG which works with stellar art institutions acquired it and organized an exhibition of 92 works with Tipu Sultan as its objective. .

In the vast pantheon of kings who were the subject of colonial-era art, why Tipu? Giles Tillotson, Senior Vice President, Exhibitions at DAG and Curator of Exhibition at Claridges, New Delhi, said over the phone: “This was prompted by the acquisition of the Singleton by Ashish Anand [CEO, DAG]. It is one of the most important historical paintings produced by a British artist of an Indian subject. Most of the works are in public collections in the UK, India Office Library or V&A, but this one was in private hands. As a registered antique purchased in London and imported to India, it will never leave the country again. Many other works around Tipu have been published as prints and it is not so difficult to collect them, such as the beautiful watercolor by Coorgi raja Dodda Vira Rajendra who allied with the British against Tipu. And just like that, we had enough for an exhibition.

The Delivery of the Final Treaty by the Hostage Princes into the Hands of Lord Cornwallis by Mather Brown | Photo credit: special arrangement

The exhibition is accompanied by a book edited by Tillotson which presents, illustrates and contextualizes this set of works. A portrait of Tipu by a Deccan artist shows him in profile, mustachioed, turbaned and adorned with jewels; she juxtaposes Anand’s foreword “his reputation remains controversial in some parts of the country and the exhibition does not claim to offer definitive conclusions. But what cannot be disputed is that Tipu was the most formidable enemy of the British in India. Yet he did not receive the same respect as others who took up arms against the British later…”.

Aquatints, etchings, maps and lithographs by some of the most brilliant illustrators to chronicle India from the late 1700s to the mid 1800s are part of the exhibition. Most show Tipu in the midst of war.

“Tipu launched the most powerful challenge to the company in the period of its greatest territorial expansion; they won’t face anything else on the same scale until the revolt of 1857,” says Tillotson.

The book, through five chapters and an extensive catalog of art, draws attention to the different facets of Tipu. Janaki Nair, Professor of History, JNU, focuses on his role as a modernizer of military technology, revenue collection and sericulture. Tillotson examines Tipu’s development in British painting and imagination, including that of Singleton, Mather Brown and Robert Ker Porter. Savita Kumari, Assistant Professor, National Museum Institute, discusses the visual culture of the Tipu court and how the same battles, particularly the Battle of Pollilur in which the British were defeated, were depicted in form murals on the walls of his Dariya Daulat palace by local artists. Drawing on archival documents, London-based historian Jennifer Howes reconstructs the stories of the women of the Tipu court in a way that identifies these women in the paintings for the first time. Aditi Mazumdar, Senior Executive Curator, DAG, writes about how eyewitnesses such as Captain Munro viewed the Battle of Srirangapatna.

“The exhibition examines how Tipu was perceived through art from a place of physical distance the artist had with the subject as well as temporal distance, 222 years having passed,” says Tillotson. “Tipu is a hot topic in contemporary Indian cultural politics, but that is not our attempt to assess. This is triumphalist art, the images embody a British attitude to an English victory. We presented it to a modern Indian audience to see what they think of it.

In the current exhibition, framed against austere walls, the life of Tipu and his universe of baghs, mausoleums and zenanas unfolds. Tipu’s sons taken hostage and received by Cornwallis find many variations. A close competitor to the Singleton in terms of the flow of a narrative is John Vendramini’s engraving of Porter’s The Storming of Seringapatam. Porter painted the original for six weeks and, at 120 feet, it could not be fitted in a single room and had to be performed on stage at the Lyceum theater in London. The print occupies three sheets and is what survives today, the original having been destroyed in a fire.

The bloody fight, the breach of the fort, the stealth of the redcoats and valiant men of Tipu, the capture of the sultan’s tiger-mouthed cannon, the moans of the dying, the outlines of the mosque and temple in the distance, and the Dotted engravings in the background offer the 18th century Briton something more than the idea of ​​India in its sepia hour of cow dust.