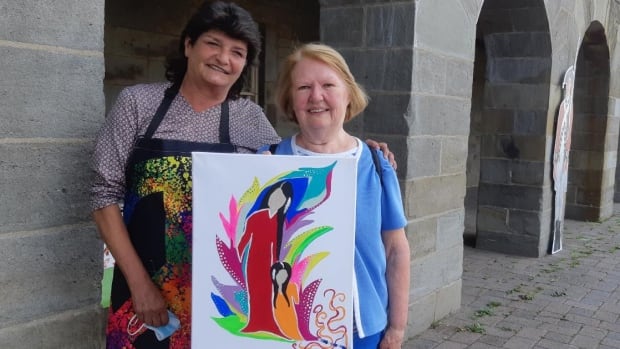 When visual artist and weaver Cyndi Nash falls asleep at night, she lets her dreams take the reins of what she will later bring to the canvas.

“I dream about my vision and what I would like to paint…it comes to mind,” said Nash, who is from St. Mary’s First Nation, also known as Sitansisk Wolastoqiyik.

“If I feel grief…if I have pain, it makes me cry when I do my paintings. And that’s because I feel the pain and the emotion.”

These days, you can find Nash alongside a plethora of canvases, painting outside the Fredericton Region Museum, where she’s artist-in-residence this month.

LOOK | “We’re not going to be quiet,” says Fredericton artist

Cyndi Nash says her job helps her process her emotions as a Sixties Scoop survivor.

The program has been running for over a decade and two more artists will be featured over the summer.

Since his residency began earlier this month, visitors from across North America have come to view and purchase Nash’s art.

Her work on display includes a collection of colorful paintings of feathers and hearts to depict missing Indigenous women, as well as images of Indigenous children and tears to show her own resilience as a Sixties Scoop survivor.

The Sixties Scoop is the name of a series of policies implemented by child welfare authorities across Canada between the 1950s and 1990s, culminating in the 1960s. , thousands of Indigenous children were forcibly removed from their families and homes, placed in adoption centers and adopted by white families across North America.

Many of these children were abused and lost their name, language and connection to their heritage.

“I come from a family of eight kids born in 10 years,” Nash said. “I was the second youngest. I was two when I was taken away one day and never saw my family.”

Nash finds her experience after being robbed a sore subject, and she doesn’t like to talk about it.

“It helps me heal,” Nash said.

“It’s very painful because even as an adult I still don’t have that connection that other people have with… their siblings,” she said.

“And it’s hard. So in painting, it helps me release that pain.”

Her work is not only rooted in her own experiences, but also for other Indigenous women and children.

“It’s for missing and murdered women and unmarked children’s graves,” Nash said. “We have to talk about it because we are not going to be silent.

“I like to paint them because I don’t want the world to forget.”

Granddaughter as inspiration for recent works

Nash remembers the painting from a very young age, smiling at how it inspired her over the years. She remembers visiting an artist in Saskatchewan when she was a young girl, who guided her in painting an aboriginal girl.

Her granddaughter, who reminds her a lot of herself at the age of two, inspires her recent work.

“I just couldn’t fathom the idea of ​​someone taking it…it helps me cope better,”

Asked about her favorite piece, Nash describes a painting of her granddaughter walking away with her doll, surrounded by a detailed feather, walking towards a man resembling Nash’s father.

“I can not imagine. How much pain he went through. Not being able to see myself growing…and that pain is why I paint.”

Each piece tells a story

Melynda Jarrett, executive director of the Fredericton Region Museum, first discovered Nash’s art online in November 2021. She said Nash’s work had a colorful wow factor and appreciated that there was a story behind each piece.

“I think it’s important that Indigenous artists have the opportunity to showcase their work in a very non-threatening artistic environment,” Jarratt said.

“Especially in these times when we are dealing with issues of reconciliation and acknowledgment of the suffering of Indigenous peoples…since the beginning of the period of colonization of this country, it is so…important that we give these opportunities to people . “

Nash said she feels honoured, blessed and grateful to be featured this year.

“It’s a lot easier to paint it than to go reveal your inner secrets and bring that pain back again,” she said. “But it gets easier, which I’m happy about.

“I hope it inspires other people too – to paint and be creative in any way possible.”

To cap the end of his time at the museum, Nash plans to meet members of the community for a Meet the Artist event at 571 Queen Street on Saturday at 2 p.m.

The artist-in-residence program will continue in August. Jason Willcox will be at the museum from August 1-15, followed by Kim Stillwell from August 17-27.