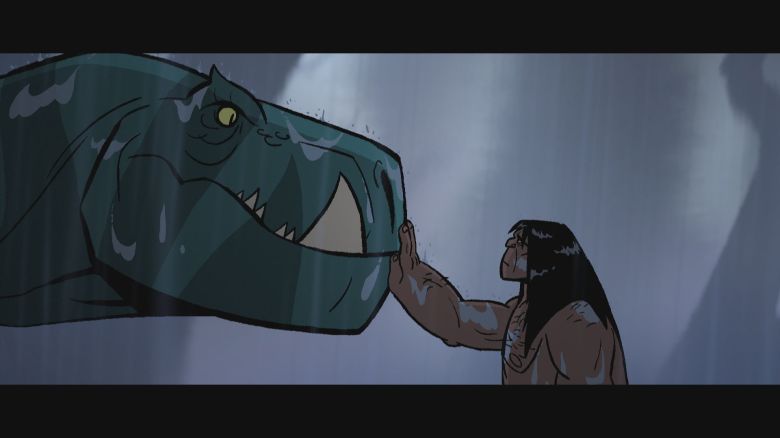 For the first time, the animator reveals his plan for the next phase of his Emmy-winning Adult Swim series: “The big idea is for ‘Primal’ to become a brand.”

Genndy Tartakovsky gets more ambitious in Season 2 of his Emmy-winning prehistoric animated series, “Primal,” proving why he’s such a revered animation maker. (The first two episodes air July 21 on Adult Swim and July 22 on HBO Max). The buddy story between Neanderthal Spear (Aaron LaPlante) and her fellow T-Rex, Fang, grows more complex, as world-building takes on a more epic scope, as they encounter civilized European cultures in the age bronze.

Picking up where Tartakovsky left off in the Season 1 cliffhanger, Spear and Fang set out to find Mira (Laetitia Eido-Mollon), the enslaved Homo sapien who has been abducted. In the first two episodes (“Sea of ​​Despair” and “Shadow of Fate”), they survive an attack at sea and make their way to an island, where they undertake separate journeys that test their loyalty.

“This all [first] the episode is themed around entering a new world so in the middle there’s more of this metaphysical and existential type of going through the night [on the raft at sea],” Tartakovsky told IndieWire. “And then they get into a storm and are attacked by a shark. It was my first storyboard after doing the first season, and we knew what to focus on more confidently because the relationship [between Spear and Fang] was working.”

Indeed, while Tartakovsky was pretty sure that the brilliant visual stylization and gore of “Primal” would prove popular, Season 1’s biggest surprise was how strongly viewers connected to Spear and Fang as their friendship was rooted in pulp fantasy. The fact that they get close during their melting pot at sea – battling both a sea turtle and a shark – sets them up for a series of adventures.

“The turtle was fun to do,” Tartakovsky said. “The biggest problem was the storm and the shark hitting at the same time in increasing danger. Each is difficult on its own in animation, but when you put all of these things together, it becomes complex to pull off. I would never have tried this before.

This underscores the artistic growth of the 2D animation team at France-based Studio La Cachette, which has been tasked with much more complex animation complexity: Spear and Fang don’t just fight dinosaurs, they fight armies in wars, and the scale of action is more cinematic. “There are a number of episodes where there are eight- to 10-minute fight sequences,” Tartakovsky said. “And every one of them nearly broke the studio.”

In the second episode, as Spear encounters and battles an intelligent human civilization, Fang bonds with another dinosaur until reuniting with Spear. “It’s like a romantic montage,” the director said. “The best part is they go hunting in the mist and we lead them straight to the village where Spear is, and from then on it gets crazy. As a theme for the season, it’s Spear reflecting on his identity and place as a Neanderthal introduced to more advanced cultures.

Following this 10-episode iteration of “Primal,” Tartakovsky revealed for the first time his plans to turn “Primal” into an anthology franchise, embracing other genres in the same minimalist animation style. “The big idea is for ‘Primal’ to become a brand,” he said. “Visceral, emotional, raw, minimal dialogue, artistic. And, with this mark, it can be extraterrestrials, from the Second World War. We’ll see if anyone gets excited about it.

Meanwhile, Tartakovsky, who recently signed an exclusive global deal with Cartoon Network Studios and Warner Bros. Animation, has a new 2D steampunk series, “Unicorn: Warriors Eternal,” for Cartoon Network/HBO Max, and an R-rated, 2D comedy feature, “Fixed,” from Sony Pictures Animation, co-produced by New Line. The 10-episode series has yet to be scheduled, but the feature film is scheduled for release next year.

“Unicorn: Warriors Eternal,” also animated by Studio La Cachette, took nearly 20 years to make. It’s about a team of former heroes reawakened in the bodies of teenagers in Victorian England. “Fixed,” about a dog who finds out he’s going to be neutered in 24 hours and decides to have fun with his buddies, is being animated at Renegade Animation (“Tom and Jerry: Cowboy Up!” ) in Glendale.

“‘Unicorn: Warriors’ is completely different from ‘Primal’,” he said. “So that’s the thing we’ve been trying to do since ‘Dexter’s [Laboratory’] with action and humor but taken to another level with great world building à la Miyazaki. There is a lot of dialogue, but I still have my wacky, very visual, caricatural and emotional sensibility. “The epitome of what I want to say is ‘Snow White,’ with the seven dwarfs crying over her seemingly dead body and you’re moved by that emotion.”

The genesis of “Fixed” actually dates back 12 years and it was the project that brought Tartakovsky to Sony. However, they weren’t swayed by the terrain, so he recently approached New Line, who wanted to do it, which resulted in Sony greenlighting the project. The biggest hurdle was having it drawn by hand. Renegade is known for 2D and the director put together a wish list of veteran indie 2D artists he wanted to work with.

“The animation gods blessed me with the premise,” he said. “In itself, this project is a unicorn. There’s steamy comedy, we do all the layouts here, so it’s very handcrafted. He has heart, he has genuine character humor and is not filled with a one-liner. And dogs act like canines, not like humans.

Tartakovsky described the animation style as Tex Avery, but not as over the top in its expressions. “So it’s like we’re following the ‘hundred and one Dalmatian’ rules, but there’s swearing and these R-rated things,” he added. “Ultimately, once the initial shock wears off after the first sequence, because we’re starting off pretty mad, you’ll hopefully settle into the character’s story and fall in love with these dogs.”

Register: Stay up to date with the latest film and TV news! Sign up for our email newsletters here.