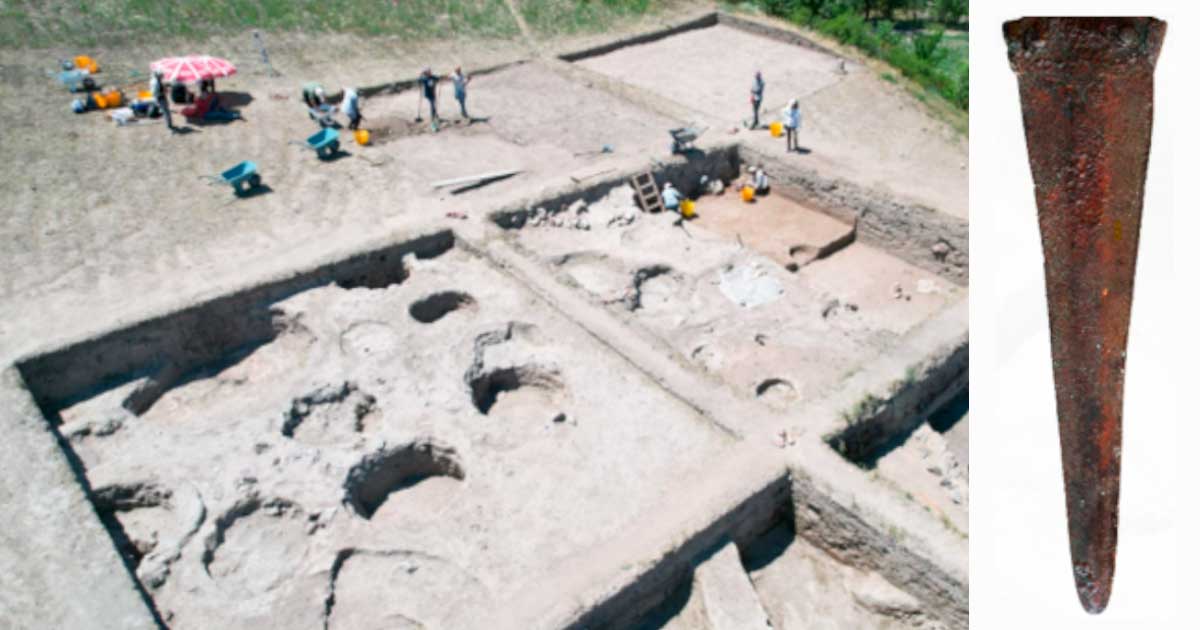 Kutahya in Western Anatolia is home to one of the oldest settlements in the world, which began 8,100 years ago. At this very site, during the excavations of Tavşanlı Höyük or Tavşanlı Mound, a 3,300-year-old seal and a sword-dagger that resembles Mycenaean weapons were unearthed. Tavşanlı Höyük was once the capital of an unknown kingdom spanning over 50 hectares, serving as a crucial connecting route between central and western Anatolia, reports Ahaber.

The Heart of Western Anatolia: Kutahya

It is often called the “Heart of Western Anatolia” for its resemblance to a heart in aerial views and is one of the largest Bronze Age mounds. Excavations began here almost exactly a year ago, under the aegis of Dr. Erkan Fidan, associate professor in the Department of Archeology at Bilecik Şeyh Edebali University, and Turkey’s Ministry of Culture and Tourism.

Governor Ali Çelik has estimated that these excavations will continue for at least 3 decades, with the initial allocation of funds being planned in this direction. In total, a team of 25 local and foreign experts worked on this site, under the leadership of Associate Professor Dr. Fidan. For the most recent discovery, a post was shared on the social media of the Department of Excavations and Research.

“Age analysis by TÜBİTAK reveals that Tavşanlı Höyük is the oldest known settlement in Kütahya. The village, which developed over time, became a large city five thousand years ago. In this period, which is called the Bronze Age, it is believed that copper and silver were processed and traded here,” Dr Fidan said.

The research and study that is going to be conducted here is important for understanding how inter-regional communication was shaped in ancient Anatolia. 25 local and foreign experts are involved in the research, and last week a team of 6 amateurs was hired to help them understand the process of archaeology. This included university students, graphic designers, art teachers, housewives and even a private sector employee. This 4-day workshop, under the banner of the Archeology Club, was an opportunity for history buffs to live a “real experience of archaeological excavation”, in particular by working with Hittite cuneiforms, Gordion mosaics dating from 750 BC, among others.

A 3,300-year-old sword-dagger and seals discovered during excavations at Tavşanlı Höyük. ( Turkish Department of Excavations and Research )

Urbanization, development and the Luwians

The settlement began to urbanize around 5,000 years ago and would become a “great city” a thousand years later, existing simultaneously with the later periods of the Hittites. This was first seen in a few archaeological centers in Western Anatolia, changing the way we understand this crucial historical region, reports Arkeoloji Khaber .

“Peoples defined as Hatti in Central Anatolia and Luwi in Western Anatolia are known to have lived during this time. I can say Hittite civilization in Hatti and later is well known, but we have no information about Luwian cities. I think Tavşanlı Höyük may be a town belonging to the Luwians, which is considered a missing link in Anatolian history,” he said.

The Luwians were a group of Anatolian peoples – they lived in central, western and southern Anatolia (now Turkey), during the Bronze and Iron Ages. Their language, Luwian, was sometimes used in interesting ways by the Hittites, making them linguistically related cousins, who shared a unique hieroglyphic script. Luwian was an Indo-European language written in Mesopotamian and Akkadian cuneiform.

In many contemporary documents of the time (especially from the Hittite capital of Hattusa) it appears that Western Asia Minor is called Luwiya. It is the advantage of this language, Luwiya, that we have so much information in the first place about the Luwian culture. It was not only an ethnic identity, but also existed as a distinct linguistic identity, one of the first fully formed identities in Asia.

Current excavations and research are helping to trace the history of Luwian and shed light on the cultural practices that allowed distinctions to exist between the Central and West Asian kingdoms of the time, which were severely fragmented.

BASF collaborates with PASQAL to predict the weather