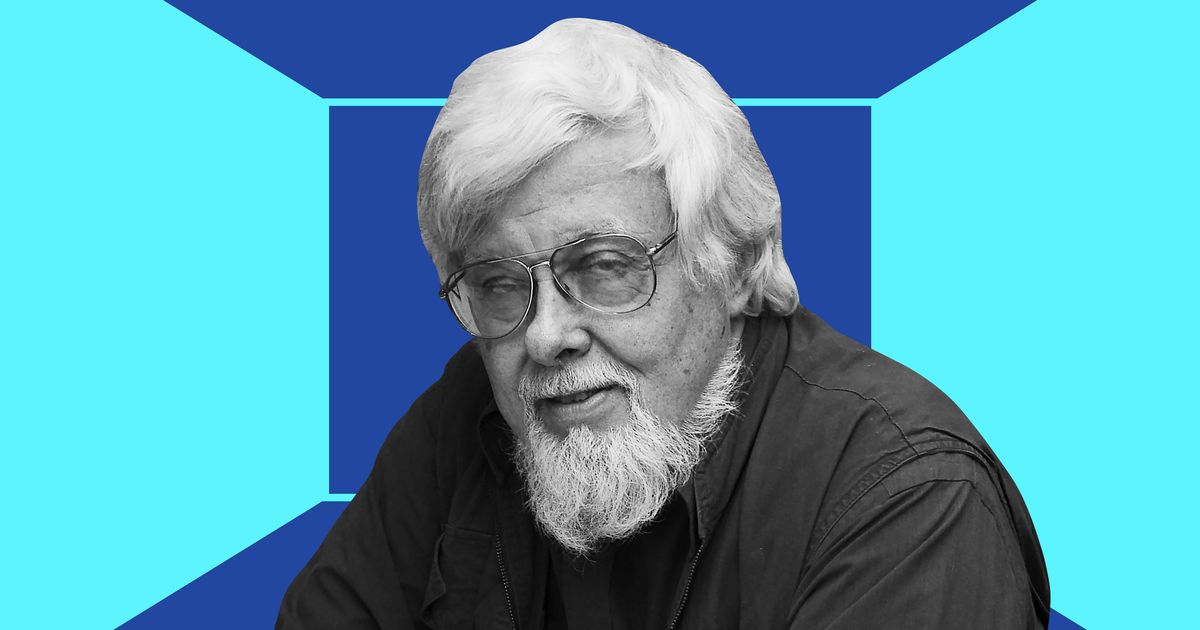 New YorkThe “21 questions” of are back with an eye on New York creatives. James Wines is the founder of SITE, an architecture-and-environmental-arts company known for BEST Products Postmodern Retail Storesthe Madison Square Park outpost of Shake Shack, the OFF-WHITE shops of Tokyo and Gwanggyo, and the 1980s fashion designer The Willi Smith Showrooms. In 2013, Wines won a National Design Award by Cooper Hewitt, and his works are part of MoMA’s permanent collection.

What’s hanging above your couch?
Posters, mainly, because the room is flooded with light. Some relate to early SITE work and promotions for conferences. I probably have a few hundred posters from different places where I’ve given talks. My drawings are very delicate, so they are hung in the darkest parts of the apartment.

What was the first job you had in New York?
In fact, I had a very successful start to my career as a sculptor. I was doing public art. I called it “plop art”, for art in a square, and that was the start. Almost as soon as I got out of school I was represented in a gallery and then became a member of the Marlborough Gallery. Then Frederick Kiesler, a famous Austrian architect, said to me, “James, you have an architectural mind. You should do this. Why do you want to do this old fashioned abstract art thing?!” So one thing led to another, I started SITE. I had enough in my public art commission bank account to self-fund the studio for a year. In the beginning, we were doing performances and publishing, really by hand, things about the environment and ecology. It was a time when everyone in SoHo, where I had the studio, was an environmental artist who wanted to escape the confinement of the art gallery.

What color are you always drawn to?
A very dark and rich green. It is the color of nature.

What work of art or artefact are you most surprised to own?
I’m not really a collector. I would love to be one, if I could afford it. I have an early drawing by Claes Oldenburg, but that’s about it.

Which New Yorker would you like to date?
Robert Rauschenberg, whom I greatly admired for his inventiveness — I would say he is the artist I admire the most. I had relatively little interaction with him when SITE designed an interior renovation for his studio at 381 Lafayette St. The design wasn’t that innovative because he wasn’t passionate about architecture. He hired us mainly because Leo Castelli, his art dealer, thought we were a hot number at the time. But we shared a fun dialogue: I had this idea for him to create an outdoor piece of art on the highly visible fire escape down the back of his building. His response was “Why would I want to do that?”, which embarrassingly reminded me to never assume what an artist might want to do.

What’s the last thing you did with your hands?
I draw every day. As Picasso said, “I draw like other people bite their nails”. The last thing I sketched was for a greenhouse project in California that I’m working on.

Is there something you have multiple versions of?
I own a lot of prints: multiples of my own graphic work and posters by artists I admire. One that is precious to me is a Rauchenberg poster of a portrait he made of [Frederick] Kiesler. Both helped free my mind from formalist design and art.

Which museum in New York do you always go to?
The Museum of Modern Art. I go very often on Sundays with Alice Aycock, the environmental artist, who has been a friend since the 1960s. We meet there, and we always see Picassos, Matisses and Cézannes there. I once said to him jokingly, “Why do we keep doing the same thing all the time? Why do we keep coming here? She said, “Well, I guess because we look around here and really know it’s worth it.” If you have a career in the arts, this is the place that proves it’s all worth it.

What do you always have next to your computer?
A cup of coffee. It reminds me of my days in Italy, where I lived and worked for ten years before coming to New York. But I still have a bunch of stuff because I can’t walk anymore and I need to have everything handy: my cell phone, drawings and sketches of projects I’m working on, research photos. That’s all related to what I do.

Where is the best view in town?
Right now, I would say from my apartment. I am on the 21st floor and I have a view of the port and the river, the boats and the people. It’s spectacular. My penchant for this really isn’t looking at buildings; it is for the human condition or human activity. What excites me most is observing what people do, how they walk, what they think, maybe. I love designing public spaces, so I’m always on the lookout for what I call “trigger” things – what people tend to be drawn to.

What building or object do you want to redraw each time you see it?
I just think any building that ignores human reaction is for the architect’s ego. It’s like ego for ego’s sake. You have no other meaning than Oh damn, I loved that shape. The tragedy of September 11 destroyed the buildings I hated the most: the towers of the World Trade Center. Public spaces looked like a fascist wasteland. The towers were absolutely absurd, with gothic decor and this meaningless height. When asked why he made two half-mile-tall buildings, Minoru Yamasaki replied, “Well, I couldn’t make a mile-tall building,” or something like that. . I guess the devs erections are inadequate so they build these huge towers to prove they are real men.

What is one thing you would change in your field?
Just humanize it – make it a real artistic experience. Rauschenberg said that if you see a painting for the first time and he doesn’t change his mind about something, then there is something wrong with the painting or with you. That’s what I feel for architecture. If you don’t react at all, if you watch it and have no opinion, then it’s not doing its job. In general, most architects don’t have a clue what I would call a real artistic sensibility. They know Design, with capital D. During the Renaissance, when you were an artist, you painted, wrote sonnets and drew buildings and public spaces. Everything was integrated. Go to Piazza Navona and discover the masterful way in which Borromini used light and shadow, pediments and columns – they come together in this way that speaks to you. You don’t understand that anymore.

If you could live anywhere in New York, where would it be?
I’m quite happy where I am now. I’ve never lived above the second floor until now, and suddenly I’m having a real New York experience with my view.

What would you do in reserve if it ceased to be produced?
I love drawing pens and my favorite is a classic Mont Blanc fountain pen. It’s funny because it’s not a drawing pen at all. Every time I go to Mont Blanc and ask to try one, I draw using the back of the pen as I can get a very fine line. Salespeople always tell me I’m not supposed to draw with the back of the pen, and I’m like, “Well, I’ve been drawing with the back of the pen all my life. That works! That’s why I buy your pens! If you had a good sense of public relations, you would make a point of it.

What do you do to get out of a creative rut?
A kind of painful process of rejection. It’s really a level of self-criticism or instinct. When you do something that doesn’t click, it’s like a sixth sense: It’s not nervous enough, it’s too easy, it’s too beautiful. Sometimes an idea comes to you like a miracle or a flash. I had some very good ideas that came from there and others that I worked on for a month. I can look at sketches and say, “Oh my God, what was I thinking that day? I’m so embarrassed.” Other times I say, “That was a good idea. How did I miss that?!”

Where was your first apartment in New York and how much was the rent?
It was in Washington Square Village, and I moved in around 1960. I don’t remember the rent. But at the time, I had this apartment, a large studio loft on Broome Street, a beautiful apartment in Rome with a large terrace overlooking the whole city, and a studio in Trastevere. All the rent was less than $1,000 per month. It was inconceivable! I thought, That’s how it’s always going to be. I lived almost ten years like that.

Where in the city do you go to be alone?
The waterfront here at Battery Park in the evening is stunning and you can be there alone. I never stayed here once until I moved here. It is a total discovery. My daughter kept telling me, “That’s good, they have trees, there’s water. And I said, “I’ll never go there.” Only tourists do that! Typical New Yorker.

Worst career advice you’ve ever received?
Stop drawing. All the computer enthusiasts laughed at me for drawing by hand. And to this day they will ask, “Why do you persist with these silly hand drawings?”” Thank goodness I did the drawings by hand. They all go into the museum collections. Each BEST products drawing was purchased by a museum. Each Tower of houses drawing was purchased. If I had done them on a computer, I doubt they would have this value.

What have you given someone that you wish you could get back?
Drawings I’ve done for important projects I’ve given away to friends – some of the earliest BEST buildings, the Floating McDonald’s, everything museums are asking for now. As I made them, I was always thinking about the next thing I was going to do. The last thing was over. Now that I’m 90, I’ve started to realize that I’d love to have them again.

What is your favorite restaurant in NYC and do you order regularly?
In the immediate surroundings, we go to the Miramar, an Italian restaurant with its feet in the water. It’s very nice. I usually get the branzino.

What descriptive phrase do you want on your obituary?
There’s a quote from Oscar Wilde that I really like: “An idea that isn’t dangerous doesn’t deserve to be called an idea.

A national gift on Confucius_英语频道_央视网(cctv.com)