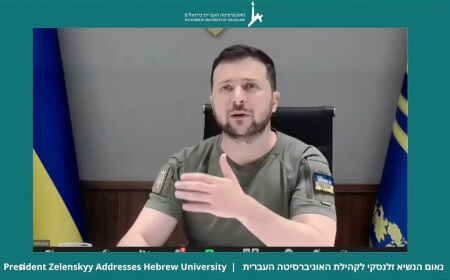 JERUSALEM — In a livestreamed speech to students, faculty and staff at the Hebrew University of Jerusalem, Ukrainian President Volodymyr Zelensky urged Israel to join the network of countries around the world that have imposed sanctions on Russia for his invasion of Ukraine.

“We are grateful to your great nation. But we would also like to get support from your government,” Zelensky said. “Tell me, how can you not help the victim of such aggression?”

In his speech, Zelensky acknowledged the linked histories of Ukraine and Israel, noting the Ukrainian origins of Yiddish writer Sholem Aleichem, Israeli Prime Minister Golda Meir, Zionist leader Zev Jabotinsky and many others.

He also noted that the Russian bombardment of Ukrainian cities has affected many Jewish historical sites, such as the Babi Yar memorial, where at least 33,000 Jews were murdered by the Nazis and their Ukrainian collaborators in 1941.

At least five people were killed in the Russian bombing of Babi Yar in March.

“The occupiers are not discretionary in the way they fight,” Zelensky said, adding that more than 2,000 schools have been targeted by Russian missiles and shelling, according to the Ukrainian government.

“It’s about values ​​and general safety. Anyone willing to destroy another nation must be held accountable,” he said.

“Many European countries are acting with us against Russian aggression. And unfortunately, we have yet to see Israel join the sanctions regime.

IIn the Q&A section after Zelensky’s prepared speech, a Ukrainian-born student asked if Ukraine had received support from international Jewish organizations to deal with the destruction of historic Jewish sites.

“We received support from the Jewish Congress and the United States,” Zelensky said.

“I wanted to have more of this support from the government of Israel on this particular issue, because that’s our common grief, and that’s what it is. I just wanted to have more. But I’m not trying to hint at anything. It is just as painful for us here in Ukraine as it is for Israel. It is a great tragedy. And I think I have nothing to add here.

During Q&A, another student told Zelensky that her father was fighting in the war. She asked if the Ukrainian government would consider adopting compulsory military service in the future, similar to that which exists in Israel.

“That’s one of the models we’re looking at,” Zelensky said. “I’m not sure that will be the exact model we follow, but it will be on the table and it will be discussed with civil society.”

He added that even without repechage, Ukrainians already know how to fight. “They defended our country unarmed, with their bare hands – but now with arms.”

Yishai Fraenkel, vice-president of the university, asked what Ukraine’s future might look like once the war is over.

Zelensky said there are plans for post-war reforms and improvements in military defense systems and pointed to a future with the European Union.

“We are heading towards a new civilization,” he said. “And we sacrificed a lot for it. But the most important thing is that it is our choice.

“Of course, we are still very young, but it is above all for our children. So we are going to build a European state, which will be part of the European Union.

He added that Ukraine and Israel have “a great future” together.

“Please remember how connected we are, how close our ties are,” he said.

“I care about our future relationship between our states and our people. That’s why I’m sincere. And I’m sure the war will end and we will win. And we have a common future. A nice future.