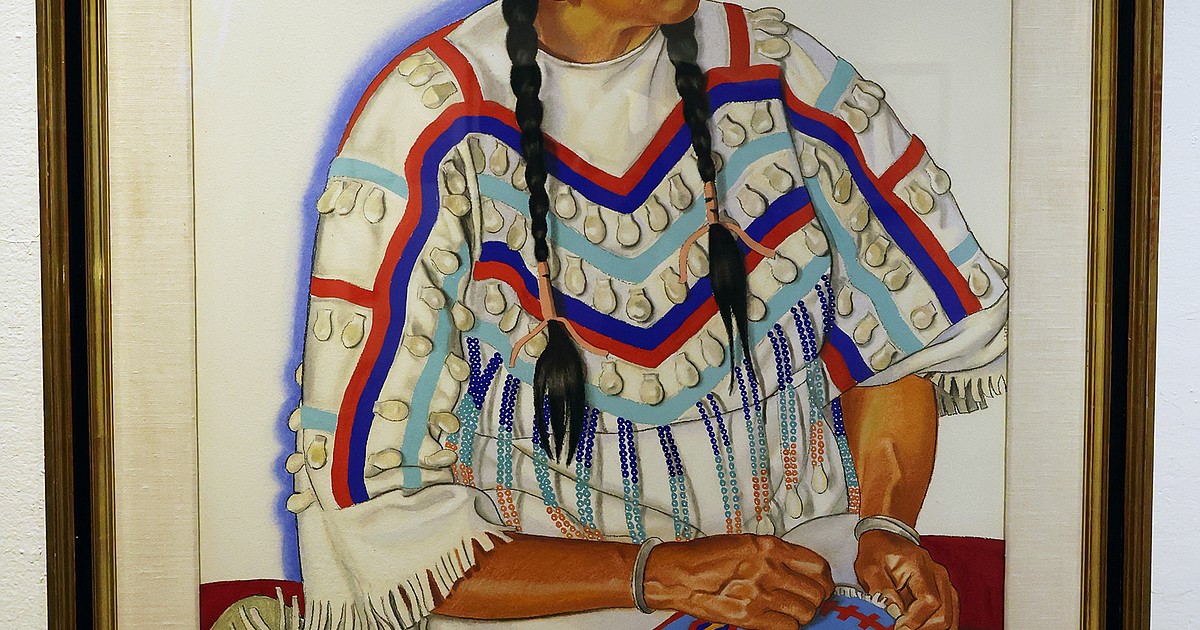 For the first time in over 60 years, the works of Winold Reiss are back on the Blackfoot Reservation, where many of them were created.

Through a collaboration between the Blackfoot Nation, the Museum of the Plains Indians, the BNSF Foundation and the Glacier National Park Conservancy, an exhibition of nine of Reiss’ original pastel portraits titled “Connections – the Blackfeet and Winold Reiss” will be on display at Browning until October 29.

“We are thrilled to bring this important exhibit to the public and the Blackfoot reservation,” said Renee Bear Medicine, curator of the Museum of the Plains Indian. “Reiss learned from and influenced inspiring Blackfeet artists past and present. The portraits are displayed alongside personal artifacts belonging to the people in the portraits, and alongside the works of those he influenced.

Son of German artist Fritz Reiss, Winold Reiss was born in 1886 and followed in his father’s footsteps by studying to be an artist before emigrating to the United States in 1913 to follow his fascination with Native Americans.

The purpose of the move was explained by the artist’s grandson, Peter Reiss, at the opening of the exhibition in Browning on May 27.

“After reading stories of the American West, my grandfather decided to come to America for the express purpose of creating a permanent living memorial of the Native culture and spiritual way of life with very accurate portraits,” said explained Peter Reiss. “He was able to do just that, but along the way he also forged lasting friendships with the people he admired so deeply.”

Winold Reiss first arrived in Browning in the winter of 1920. Moments after getting off the train, he met Turtle, an accomplished Blackfeet grizzly bear hunter who would become his lifelong friend and the subject of many of Reiss’s portraits. – one of which hangs in the exhibition.

While his subjects had many reasons to sit for portraits, one was that Reiss paid well, between 50 cents and $1 an hour—between $10 and $20 in today’s money.

Returning to the reserve in 1927, this time Reiss was commissioned by the Great Northern Railway Company to produce more portraits to help publicize the railway’s Empire Builder.

While many other artists sold their work to Great Northern during the same period, it was Reiss’ work more than any other artist that came to define their advertising campaigns.

Over the years, the GNR has used Reiss’ images on a number of promotional items, from calendars and posters to playing cards, train menus and more.

IN THE In the summer of 1931, Reiss opened an art school along the shore of Lake St. Mary near the eastern entrance to Glacier National Park. While the school was operating independently in 1931, it reopened in the summers between 1934 and 1937, sponsored by GNR.

Students could pay to attend school and could even earn college credit through New York University, but Reiss still waived tuition for Blackfeet students.

Reiss is quoted in the exhibit for saying that the Blackfeet artists were the “most talented students I have ever had”.

The GNR ended up buying nearly 100 portraits of Reiss over the years, which are now part of the collection owned by the GNR’s modern successor, BNSF Railway.

WHEN THE GLACIERS National Park Conservancy board member Cheryle “Cookie” Cobell Zwang began dreaming of a project that would benefit both the park and her fellow Blackfeet Tribe members, Winold Reiss’s work immediately came to mind.

Her great-grandparents had both posed for portraits of Reiss and she knew many others in the area who had relatives who had done the same.

The opportunity to attract visitors to Browning and showcase the lives of those featured in Reiss’ painting was the perfect pairing Zwang was looking for.

“I thought this project could bring tourism to the reserve, but could also tell a story that couldn’t be told anywhere else,” she said. “These are such iconic images. I knew many people would recognize and appreciate them. They attract a lot of attention. »

Zwang approached fellow BNSF Railway Foundation board member and chairman Zak Anderson about the project and soon the ballooning began.

“An idea is a very small thing unless you can get people to buy into it and make it happen. It seemed like it was an idea that anyone could adopt,” Zwang said.

At the end of May, Zwang’s idea became a reality.

“Making these paintings available to the public here at Browning and at the Plains Indian Museum is really important,” said Glacier Conservancy Executive Director Doug Mitchell. “This is a wonderful opportunity for all of us to explore Glacier’s complicated and sometimes charged history, and to do so through the lens of the park’s first inhabitants whose living relatives give voice to the real-life stories of the people in Reiss’ work.

“I knew my great-grandmother was a fabulous craftswoman, but seeing her work in person was truly amazing. It was an amazing experience and everyone who visits the museum experiences it as well,” Zwang said. “The objective of the exhibit is to bring to life the characters in the portraits as well as the Blackfoot who studied with Reiss.”

“Reiss had such a connection to the people and the land,” Zwang added. “My greatest hope is that this exhibition will allow many people to discover the museum and all that it has to offer. I hope people will appreciate the work of Winold Reiss for the amazing art that it is and also for the amazing people in these portraits.

Located at 19 Museum Loop in Browning, the Museum of the Plains Indian is open Tuesday through Saturday from 9 a.m. to 4:30 p.m.