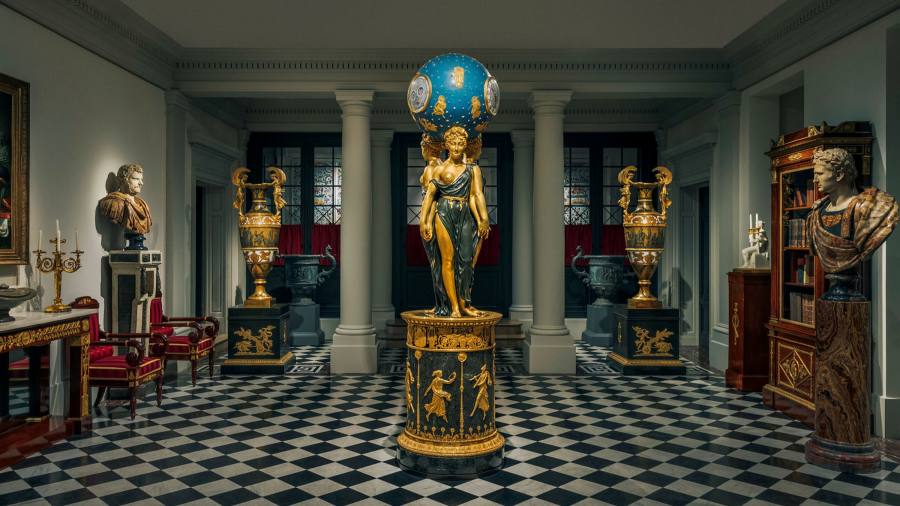 “A strong theory is that it would be displayed at the entrance to the artist’s studio as a spectacle item – or perhaps a show-off. When we saw it, we all said to ourselves that we just had to acquire it, even if it is a little outside our usual period.

Out of time, late 19th century: the Kugel Gallery, a family business of which Laura is a part, specializes in works from Antiquity to the beginning of the 19th century. But that’s typical, she says, of their approach and range: the best quality and most unique pieces are the hallmark. “It exemplifies the strengths of our organization: we can only buy what we like – it can be for many reasons, a fascinating provenance, something entertaining or something unusual, unexpected.”

I ask her the question that you always have to ask her and that you have to get tired of answering: has she always had the goal of joining the family gallery? The reason this is a more or less unavoidable question is that Laura is the sixth generation of this most famous and esteemed neighborhood in Paris. antiques. A treasure by appointment at the Hôtel Collot on the left bank of Paris, it is known for its museum-quality works, from Renaissance portraits to clocks, from enamel and silver to tapestries, from fine Egyptian statuary furniture, with art of every kind imaginable. And the family tradition dates back to the beginning of the 19th century in Russia.

“No,” she said with a laugh, “I guess that surprised me a bit.” She studied social science and politics in London rather than art history, and it wasn’t until she started accompanying her father and uncle, Nicolas and Alexis, on shopping trips. or expertise, “by following them and observing them, and starting to learn about fantastic objects, it became clear that this was the way for me. She joined the gallery in 2015.

And with such a history, was it intended to bring an innovative style to the long-established company? She laughs. “Of course when I arrived I had what I thought were 100 brilliant ideas, but I soon realized my dad and uncle had been doing this since they were very young and extremely good at what they’re doing. So the change is very organic, we’re working extremely cooperatively and changes are sort of happening. It’s a gradual opening up, mostly digital.

However, there are innovations. Galerie Kugel only exhibits at Tefaf Maastricht, but has been organizing special showcase exhibitions for some years now – for a wider “creative carte blanche”, as Kugel puts it. The most recent, titled The creators of tasteexplored the role of the powerful mercers, merchants who shaped the luxury market in France in the 18th century. It was held in New York at the brand new Villa Albertine, an institution that plays the role of ambassador of French culture in the United States. “It was important to show our American customers that we are back,” she says.

Such showcase exhibitions require a lot of work, research, discovery. “There are really two parts,” says Kugel. “One to get the idea, then you have to collect the objects. We sometimes work on these projects for five to ten years. We are very proud of it. »

Will there be something similar at Tefaf Maastricht? “Obviously we’re generalists with a broad spectrum,” she replies, “so we try to show that range — in an 80 square foot booth, it’s not easy! We are therefore not presenting a theme and we are not planning anything extravagant in terms of presentations. We try to bring in a large volume of work; we just aim to bring the best we can. And after a two-year break, the works on display will probably be spectacular: “We have preserved objects, unpublished discoveries that we have made and that we have preserved,” she says.

Kugel has a dual role at Tefaf: in addition to being a prominent exhibitor, she is a member of the board of directors. Unlike other art fairs, Tefaf is a foundation rather than a company. “It is overseen by a board of directors, a mix of dealers, art collectors and others, people who have skin in the game. I joined the board two years ago . This year in Maastricht will therefore be the first time that I will have the opportunity to meet all these colleagues.

Tefaf, like other salons, had to decide whether to shut down completely or run an online version during the pandemic years. “We had to invest quickly in new initiatives, but I think we all agree that they are second to none in terms of access and reach. Collectively, across the profession, I think we’ve made tremendous progress, so there’s a positive side to all of this. We come back stronger and we learned that there is a very large audience of people who care about what we do.

“Tefaf is the exhibition of works of art: this is where we see visitors who have the curiosity to come see us, and say to us: what can you show us? What’s special?

Beyond the fair, have the pandemic years changed the business model of the gallery itself? “Absolutely,” Kugel replies. “The way of doing business of the past decades no longer really prevails and the field of possibilities has expanded incredibly. This is one of the positive points of the last two years. Now we’re pushing to be more visible, whether that’s in the form of events and presentations, or a stronger online presence, so we’re experimenting a bit with what works and what doesn’t.

The current special exhibition at the Kugel gallery is a selection from the legendary collection of the late Hubert de Givenchy, aristocrat and couturier, described as “one of the most illustrious representatives of the great taste”. His collection was extensive, Kugel points out, but this exhibition shows his passion for 18th-century French furniture: other pieces from the collection have arrived at Christie’s Paris — this week’s sale broke records, with a total reaching nearly of 83 million euros. Such extraordinary collections from the past pass through the hands of the Kugels, but does she think the future will still see such treasures, or does the global range of patrons mean dispersal is inevitable?

“Auction houses can only scatter a collection, they can only fragment it, lot by lot. One thing we’ve done is sell items in groups; it is something for which we have developed a specialty. So when Hubert de Givenchy gave us his collection of enamels for sale, in 1994, it left as a piece in Yves Saint Laurent’s collection.

Beyond the sale of inventory, customer requests can be even more specialized. Saint Laurent, it is reported, once sent the Kugels a photograph of patron Marie-Laure de Noailles, beautifully dressed, seated beside a table covered with art – and asked them to reproduce it for him. Kugel herself does not mention this story, but she says, “We have customers who come to us asking for a Kunstkammerfilled with artwork of one kind or another – and we are able to provide that.

The gallery prides itself on careful research and discovery, and the expertise to meet such demands – there is a library of thousands of volumes, a publishing program to accompany the exhibitions, and Alexis and Nicolas Kugel are the authors of numerous scientific works. publications in the museum world. “It’s nice that the mercantile aspects can partner with the big institutions – it’s a hugely rewarding part of the job.”

The fashion for the ‘horizontal’ collection – across genres and eras – is something that the style and range of Galerie Kugel certainly encourages. “Trends come and go,” she says, “right now, artwork is very strong. We work a lot with eclectic collectors who may come to us for furniture but are drawn to other things, especially fine craftsmanship.

And what about his personal tastes? “I spent my formative years, especially with my father, going to museums with the great princely treasures – in Florence, in Vienna – and seeing incredible objects that are just awe-inspiring. he artist was able to chisel silver in this way, or transform ivory in this way. Personally, that is what moves me the most, when confronted with such a homogeneous skill. It is like a small world that lies in your hand. So works of art are my favorite department – works that have no other reason for being than to be amazing.

Gilberts: Zion was once an active and thriving community