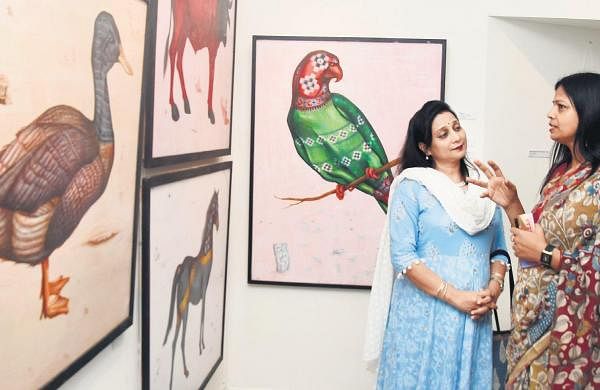 The entwined serpents are red and gold, looking tall and proud like Rani Padmini. Agnihotri, the golden sheep with powerful gaze, welcomed everyone to the unknown lands of excavation sites. Surya Putri, the horse, reflected the colors of a bright sun and a black moon with different patterns engraved on its body.

Each painting had a story to tell, a land of mystery to discover and a message to draw from it. Zooming in on Helen Brahma’s paintings at the ‘Guardian Spirits’ exhibition held at Cholamandal artists’ village on Saturday, art lovers kept talking about how Helen merged myth and reality, with solid historical and cultural research.

Beginning her artistic career depicting still lifes and nature studies, the artist had her breakthrough when she met art historian Elinor Gadon, who was researching the temples of Odisha.

“I saw my local environment with a new perspective after accompanying her on tours of historical places around Odisha. My interest was piqued by the reverence for women expressed in the worship of the goddess. At the same time “, as a young artist entering motherhood, I was intrigued by the disparity between religious and real representations of women. This served as a starting point for my iconography, which crossed the divine and the human”, has said Helen.

Her interest in textile painting came from the idea of ​​creating something related to women that has eternal life. “I painted on sarees using sindoor, haldi, bindi etc. After a while I felt that the soul of the saree broke when not worn for a while. long time. I wanted to create something that could be kept for a long time with a deep message. So I thought of painting textile on a canvas,” shared Helen.

The many animal and bird pieces that accompany the yoginis are presented as iconic images with their own existence in his art. “Yogini temples in India are roofless shrines to female masters of yoga in Hindu Tantra, who are sometimes identified as deities, who embody divine feminine power,” Helen explained.

She also uses vahana, the icons she has painted, to share her views on gender parity – just as the male vahana supports and protects the Yogini, men should ideally use their strength to nurture rather than dominate the women. H

History is explored in Helen’s work, with its cycle of making and breaking down. While trying to understand the story and the work behind each piece, we realize that the artist is trying to visually solve a problem that has not yet been solved in reality outside of his painting.