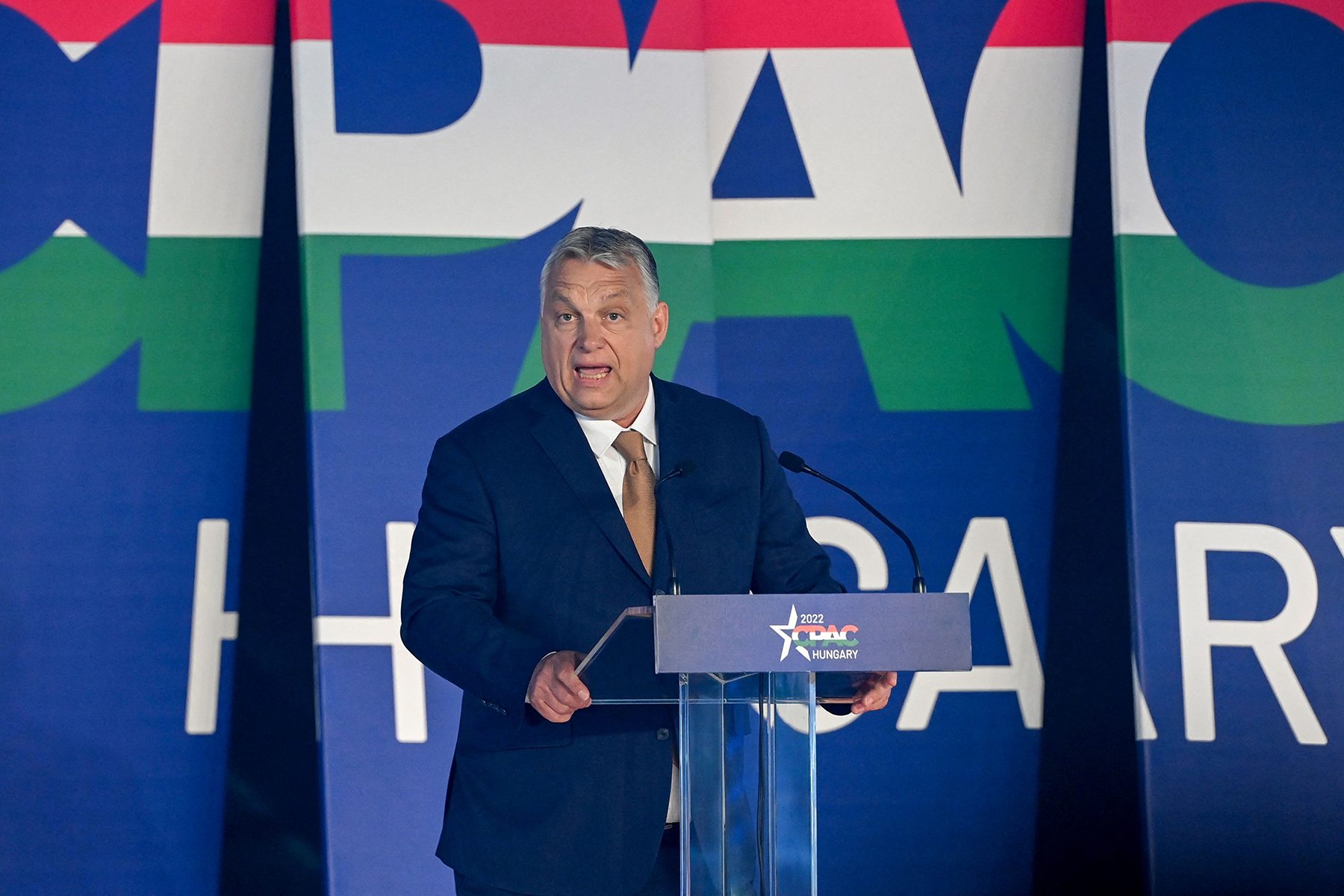 CPAC Europe in Hungary is a safe space for authoritarians

BUDAPEST, Hungary — European and American conservatives descended on this city on Thursday morning to lament the supposed “suicide” of Western civilization. The impending cultural death was blamed on a variety of causes, including immigrants “replacing” native-born workers; communists and “progressives” push for “gender madness”; and liberal democracy, which created a new “civic religion” out of human rights. Speakers, ranging from Parler’s CEO to Hungary’s prime minister, denounced the ‘woke’ media and ‘unified troops of the international left’ during a series of programming blocks with titles like ‘Western Civilization Under Attack’ , “In the God We Trust” and “Culture Wars in the Media”. It was the opening day of CPAC Hungary, the first European edition of the American Conservative Union’s flagship conference, and dark clouds were forming over Hungary.

“James Burnham said that civilization dies only by suicide. I fear that our lack of activity will easily lead to such an end,” exclaimed Vaclav Klaus, the former Czech president. “I’m certainly not the only one here who feels we’ve come to a turning point. We must actively start defending and promoting the ideas that we have inherited from our predecessors.

What were these ideas and how could they be saved?

The answers offered by an international list of nationalist speakers betrayed a growing affinity between American conservatism and illiberal authoritarians in Europe. Immigration, gender identity, abortion rights, foreign culture, and the media all had to be tightly controlled by authoritarian politicians in order to save the indigenous (white) population, the Church, and “Western Civilization.” “. And if the Americans present complained about what they heard, they kept those thoughts to themselves.

According to Mark Krikorian of the far-right American Center for Immigration Studies, the West suffered from “allophobia”, which he defined as “the dislike for your own country, your own people, your own history and your own culture” and “xenomania”, described as “an irrational preference for anything foreign, almost sanctifying the Other”. This “loss of civilizational trust,” he said, “is the real threat to the West, and it is in this context that mass immigration poses a threat to Western civilization.” Migrants, according to Krikorian, do not really assimilate these days.

“What it takes for immigration to succeed is what researcher John Fonte, one of the leading theorists in this field [from the neoconservative Hudson Institute] calls “patriotic assimilation,” Krikorian continued, “where newcomers, and especially their children, emotionally and psychologically embrace the country and people they have joined and see the culture, history, and heroes as theirs with the faults and glories of this one.”

Too many people don’t embrace this “Western past”, explained Frank Furedi of the Hungarian 21st Century Foundation. “What they’re saying is the past is a clear and present danger – a danger to our lives here and now – that’s why you have people at United Statues getting rid of statues.” It was part of a left-wing attempt to control the language, Furedi said; an attempt to “control our minds”.

Such an unnecessary plot was also championed by Hungarian Prime Minister Viktor Orban, who won a landslide re-election here in April. On Monday, in a speech inaugurating the new session of the Hungarian parliament, Orban denounced “the recurring waves of suicidal politics in the Western world”.

“One such suicide attempt that I see is the great European population replacement program, which seeks to replace missing European Christian children with migrants, with adults from other civilizations,” Orban noted. “That’s also how I see gender madness.”

Orban’s comments bore a striking resemblance to the so-called “replacement theory” – the idea that white Europeans and Americans are strategically displaced from their majority status by immigrants and leftist allies. The “great replacement” has been mentioned as an explicit motivation in the manifestos of several mass shooters around the world – including the New Zealand mosque attacker, the El Paso shooter Wal-Mart and, more recently , the author of the Buffalo shot. During his CPAC keynote on Thursday morning, Orban watched the exclusive crowd of right-handers gathered before him in the grand ballroom of the Balna, or Whale Conference Center – a centerpiece of modernist architecture on the eastern banks of the Danube. Just six weeks earlier, he had traveled there to celebrate his fourth consecutive election victory as the country’s prime minister. He once again returned to the well of migrants threatening the nation, but this time he made the threat economic rather than racial.

“The cause of the nation is not a matter of ideology; not even tradition,” Orban said. “You have to help and support the Church and support the families because they build the nation. They make up the nation. This means that you will always have to stand on the side of the workers. That’s why we decided to stop the migration and build a wall.

Matt Schlapp echoed Orban’s remarks, though he linked the replacement of Western (white) populations with migrants to abortion rights in the United States. The president of the American Conservative Union — CPAC’s parent organization — Schlapp was a longtime Republican operative who cut his teeth in the early George W. Bush years. Ending abortion, he argued, would “create more people”.

“For people who believe that we need to somehow replace populations or bring in new workers, I think this is a nice and appropriate first step in enshrining in law the right to life of unborn children,” did he declare.

Asked by rolling stone if that meant he believed this “replacement” was currently happening in America, Schlapp said, “we’ve certainly been doing this in America for a very long time.”

“As you know, in many European countries they are not there – they are not replacing each other in the population. So there is a decline in population, which always results in stifling economic growth. It is not a religious idea; just an economic idea. And so what they often say is, “Let’s look to an immigrant population to meet this economic need,” he continued. “One of the marches on our history is this idea of ​​turning a blind eye to the millions of children who weren’t allowed to live and could have lived wonderful, beautiful lives and could have contributed in ways that we don’t. We’ll never really understand. And that to me is the most interesting thing that the left doesn’t bring up when it talks about critiquing this theory.

When another scrum reporter asked Schlapp if he believed in the replacement theory, he replied, “I don’t know if I understand what it is,” but cautioned against blame Buffalo’s shooting on this plot. “I think it’s unfair that you feel like you know why this very troubled young man did what he did.” (The shooter himself was pretty explicit about why he did what he did, releasing a lengthy pro-grand replacement theory manifesto before targeting black people in a mass shooting that killed 10 people.)

CPAC Hungary was held in conjunction with the Orban-backed Center for Fundamental Rights, and while this is the first event of its kind in Europe, it is far from the ACU’s first venture outside of American politics. Previous events include CPAC Australia, CPAC Japan, CPAC South Korea and Prison CPAC, where members of the American right spoke to a captive audience of South Philadelphia inmates about the merits of conservative values. Later this year, CPAC will travel to Brazil to support Jair Bolsonaro’s re-election bid and to Mexico, where he hopes to bring a new right-wing political party to life called the Movement Viva Mexico. And that’s just the beginning – an “Israel CPAC” is coming soon.

The goal is to create an international coalition of right-wingers who can work together to defend a common idea of ​​”the nation”. This does not mean that they share the same political values. The ACU has mostly embraced traditional ideas like freedom of the press – something that often goes against its international partners. The Orban government, for example, used its influence to expel almost all dissident media, with the exception of a few independent online media in the capital. Since 2018, all local outlets in the countryside have been controlled by Orban and his allies from the ruling Fidesz party. A self-proclaimed “illiberal,” Orban has repeatedly justified his attacks on press freedom as part of his fight to protect Western civilization — but in truth, it mostly kept his authoritarian dddddline unchallenged. question.

“I know the old philosophy of Western democracy that partisan politics and the media should be kept separate from each other. That’s how it should be,” Orban taught Americans at CPAC, “but my friends, Democrats don’t play by those rules. Let’s count how many media serve the interests of the Democratic Party. NC, The New York Times – I could go on, but I wouldn’t make it to the end in the evening.

In an example of the Orban administration’s opposition to a free press, all American journalists were barred from the conference. Journalists from Vox, Vice, Rolling Stone, and the new yorker were forcibly removed when they attempted to obtain credentials at the media check-in counter. the Associated Press, likewise, simply chose not to send anyone after the Center for Fundamental Rights refused to respond to months of emails. (The Center, like many other young think tanks in Orban’s Hungary, receives a significant portion of its funding directly from the government.)

After promising this journalist and others that they would be allowed in, the ACU did not lift a finger when friends of the Hungarian autocrat barred the media from attending. It was an ominous sign of American conservatives siding with illiberal authoritarianism on the founding principles of a democratic society. It is unlikely to be the last.