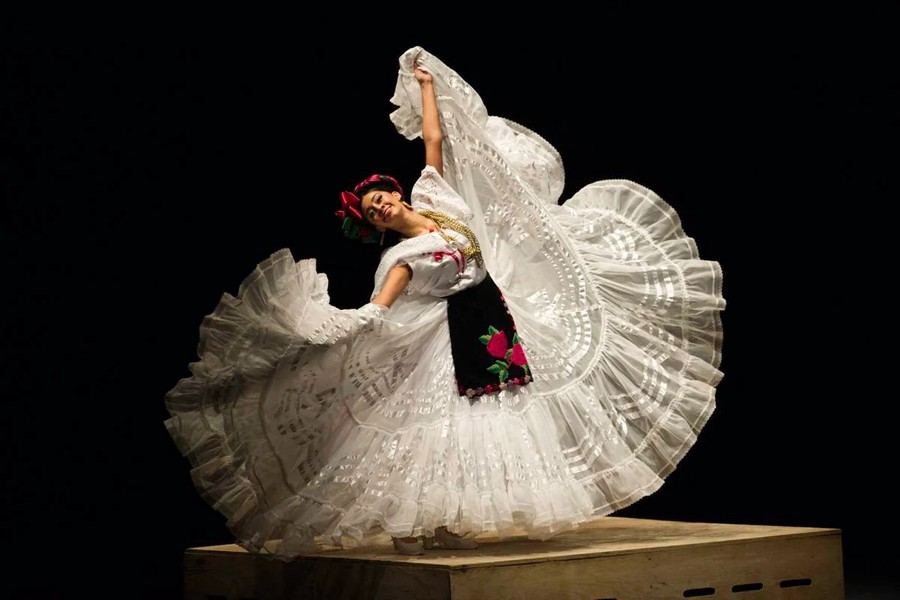 From an early age, choreographer Amalia Hernández knew she was going to become a dancer. However, classical training at Mexico’s National School of Dance didn’t feel right to me. There was no emotion, no mind, no heart. So, Hernández instead began his exploration of traditional Mexican dance, learning the native dances of regions across the country. From this experience was born the Ballet Folklórico de México.

The first ballet, “Aztecas”, translated historical chronicles, sculptures and artifacts from Aztec ritual dances into choreography. The curtain opened to an explosion of bold music and an explosion of colorful costumes dotting the stage. Large headdresses and fans accompanied each step of the dancers, expanding their movement and adding energy to the stage. Bells hung from the dancers’ ankles, complementing the music and accentuating every movement, no matter how small. “Aztecas” consisted of four dances, the “Dance of the Priests”, the “Dance of the Maidens”, the “Dance of War” and the “Dance of Celebration”. Each was marked with their own instruments, costumes, and choreography, creating a beautiful depiction of Aztec culture.

The next piece, “Sones Antiguos de Michoacán”, combined modern and classical dance techniques, with the dancers using their long skirts as part of the performance. These unique visuals drew the audience even further into the performance, drawing their attention to the next performance.

In the “Tarima de Tixtla,” the dancers donned tap shoes, their accented steps shaking the wooden stage and portraying the warmth of the people of Guerrero. As the program describes, “the swirling of skirts and the tapping of dancers’ feet show an unceasing dialogue through dance.” And this feat indeed involved the audience in the performance, a trend that continued throughout the show. The stage setup and the placement of the dancers had a community feel, in which the audience was included. Those watching exhibited a range of reactions, from clapping to tap beats to dancing with those on stage.

Next, “La Revolución” displayed an image of “solderas”, or Adelitas, preparing for war. Historically, these women played a huge role in the Mexican Revolution, taking “their lives and some possessions to the scenes of war” (Ballet Program). The scene was painted to create contrast – aristocrats enjoying an elaborate celebration before the rebels burst into the party, ready to fight. The dance, along with the art, perfectly captured the spirit of the Revolution.

“La Charreada”, the next dance in the show, incorporated cultural characteristics of Mexico’s equestrian and ranching communities. The program describes “charrería [as] an art and a discipline in which men and women compete, dressed in colorful Mexican costumes adorned with silver studs. Equestrian elements and props such as the lasso have been added to wonderful partner dances featuring pairs jumping and moving around the ropes together.

The choreography reminiscent of flamenco in “Fiesta en Tlacotalpan”, imitated the celebration of the Virgen de la Candelaria, during which the streets are filled with “mojigangas, fandango dancers, jaraneros and beautiful women who wear the typical costume of Veracruz” (Ballet Program). A mariachi band accompanied the streamed music, adding a theatrical element to the performance, while the particularly upbeat dance in this number drew ecstatic cries from the audience.

“La Vida es un Juego” told a more linear story than previous plays, featuring a bride, her fiancé, her lover, and the devil orchestrating the whole story. The dance served as a way to connect the characters and display their emotions through movement and a rather rambunctious plot.

In contrast, “Danza Del Venado” took an artistic approach to depicting the stag dance, a ritual performed before hunting expeditions in the state of Sonora, in which participants imitate the movements of prey. The changing movements of this dance created tension as a deer was chased across the stage. When the deer was finally shot, its death was dramatized by the choreographic depiction of slowed heartbeats.

The final performance of the ballet, “Fiesta en Jalisco”, began with the return of the mariachi band. The culture of the Mexican state of Jalisco was shown through vigorous dancing, multicolored costumes and booming music. This last performance was incredibly special for the audience; the clapping of hands and the stomping of feet shook the ground incessantly, while cries and exclamations rang through the air. At the end of the show, looking around me, I can say with confidence that I had never seen a more unanimous standing ovation.

Although the performance had a few technical errors, whether it was a small misstep or a misstep with a lasso, the energy the cast members brought to the Auditorium Theater nonetheless made the memorable show. The company’s performance Ballet Folklórico de México accomplished what the crowd was looking for: a triumphant unification of community and culture.

I highly recommend attending a performance by Ballet Folklórico de México in the future. In the meantime, while waiting for their next tour to stop in Chicago, I recommend that you explore similar events through the chicago latin network. I will absolutely take their next opportunity to connect with the performers like the audience did that night.