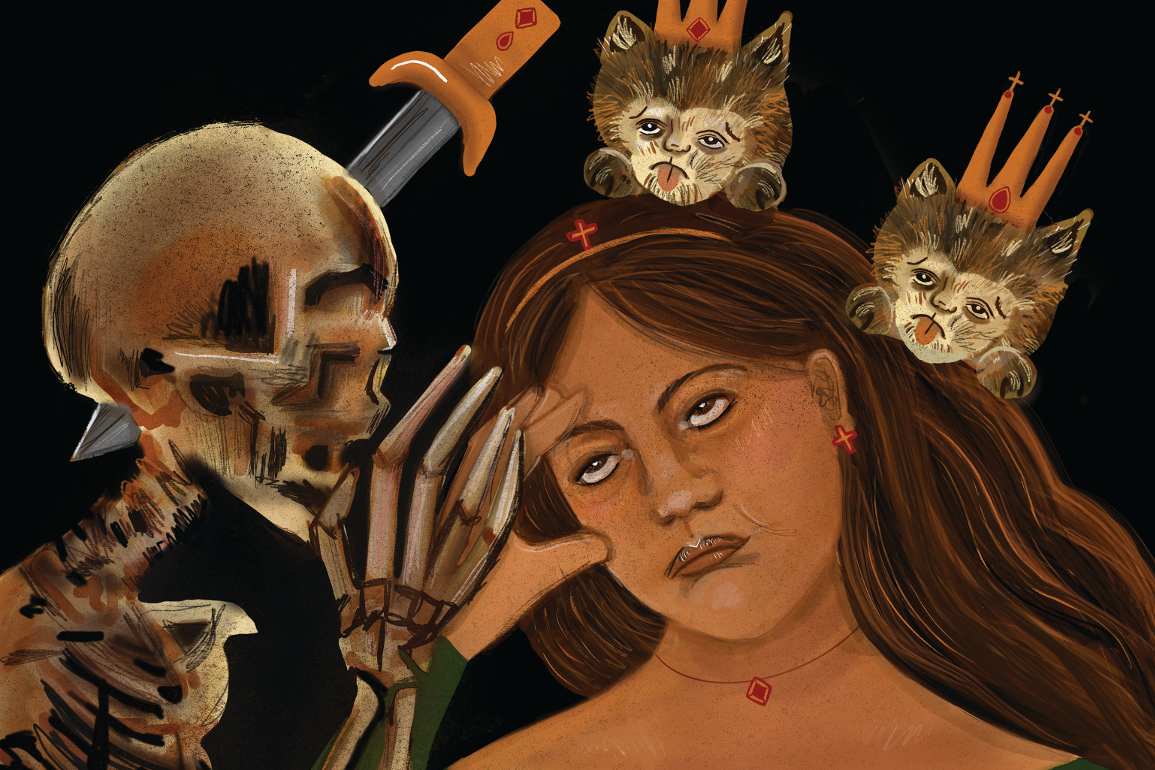 A huge forest stretches for thousands of miles in all directions, with rivers that the traveler, whether pilgrim or trader, has to cross on foot, leading a weary horse. Bear and wolf tracks are often seen. Elk swim in cold lakes. There is a strange absence of people.

After the sound of someone chopping wood, the traveler may arrive at a monastery, with monks busy with manual labor or praying in the chapel. In the scriptorium, a small and precious library is kept, which allows for a limited, but crucial, scholarly culture based on the Bible and a strange assortment of ancient writers such as Ovid, Cicero or Boethius, all in Latin.

Or the traveler may arrive at a small settlement in a secluded clearing. Here, a local lord rules over the village of peasants and slaves, as they work each day to get a meager harvest of wheat, pigs and cattle. The community faces a constant risk of starvation. The serfs work without wages and without personal freedom to feed the family of the lord and to maintain in good condition the fields, the roads and the bridges of his domain.

In the early Middle Ages, around 500 to 1100, Europe was also dotted here and there with towns left by the Romans, but the ruined stone buildings were covered with vines and trees. The new population built wooden huts among the old stone columns. Nevertheless, in such a place our traveler can buy goods in the market, get a fresh horse and pray in the cathedral.

What is the Middle Ages? This is the period between the fall of the Roman Empire and the Renaissance: roughly, the years between 500 and 1450. Historians further divide the period into “early” and “late” Middle Ages. This is the medieval period: medi (middle) aeval (from aevum, age or period).

How to explain the fascination of the Middle Ages? It is often said that it is “a thousand years without a bath”. Point taken. But many Italian cities had public baths, and Emperor Charlemagne spent every winter by his beloved hot springs. Nevertheless, millions of avid viewers are streaming shows about Vikings or following the Wagnerian drama The iron Throne. The themes of violent conflict, devious plots, and tribal hostilities aren’t far from the truth, though medieval communities were surprisingly good at negotiating an end to conflict. Even the Vikings could be reasoned with, if they are rarely trusted.

Television costumes and theater sets depend on certain visual clues that speak of medieval times: the misery of the village, the stained faces and, for some reason, people wearing shaggy waistcoats. Then there is the well-informed stupidity of Monty Python and the Holy Grail.

Tales of King Arthur and his knights have been popular since the Middle Ages, with unforgettable tales of bravery, selflessness, sex and betrayal. The tales of Robin Hood, with a cheeky sense of humor, demonstrate the stupidity and greed of the powerful, and pay tribute to the survival of the little guy in the face of an oppressive society.

In my childhood, King Arthur and Robin Hood were first introduced to me in books written “for boys”. Soon I graduated from Bullfinch’s The age of chivalry (still one of my favorite books). The modern saga of JRR Tolkien The Lord of the Rings, informed by Tolkien’s experiences in World War I and World War II, filled my youth with a medieval worldview, presenting complex ethical themes such as the tragic nature of evil, the vital importance of friendship, distrust in the presence of the powerful and the journey of self-discovery. None of these things were taught in school! Tolkien’s epic filled my heart with the idea of ​​hiking and nature adventure, and so I became an avid backpacker.

A day may come when the late European Middle Ages (1100-1450) will find its own popular audience. It was then that the great universities were born (dear to the heart of any professor), that the Vikings disappeared and that the cities of Europe staged a revival of urban life, commercial and banking activity, construction of roads, long-distance trade and greater connection between communities.

At the end of the Middle Ages, the good and the bad of society were in stark contrast: Jews were plundered, killed and often expelled. European society was stunned by the twin disasters of the Black Death and the Hundred Years’ War. Superstition and rumors spread easily. So-called heretics were treated with incredible cruelty.

On the other hand, it was a society that offered more ease and prosperity to some. It was a time of good literature. Popular works were written by such wonderful authors as Chaucer and Boccaccio. These entertaining books were composed in the vernaculars of Europe, as literacy became more common in late medieval towns.

The roles offered to women were expanded to some extent, under the patronage of the increasingly popular Virgin Mary. The tidy enclaves of beguines provided refuge for the literate piety and flower gardening of women in northern cities. The fascinating and independent Christine de Pizan has become a bestselling author.

The High Middle Ages seem primitive and made up of simple components: lord and peasant, church and castle, and enthralling and easily staged conflicts in the imagery of cinema, novels and legends, while the Late Middle Ages appear as a time of greater complexity and civilization, and of large-scale violence. The Late Middle Ages is closer to our time, but it rewards the student with literature and works of art that still captivate.

Take my advice, dear reader, and visit your public library in pursuit of the Middle Ages!

Chartres Cathedral is instantly recognizable, with its two towers of different heights, each having a unique shape, framing the perfectly placed rose window in the center of the facade. The cathedral was built between 1194 and 1260 as one of the earliest examples of Gothic architecture, with its soaring central nave, pointed arches and vaulted ceiling, and over a hundred stained glass windows depicting a bewildering array of bible stories.

Since its creation by the master masons of northern France, Chartres has remained the paragon of Gothic cathedrals. “Every subsequent cathedral was affected by it, though none was ever so complete as it was,” historian Vincent Scully remarked in his book. Architecture: the natural and the man-made.

Visitors to the cathedral are still amazed by the great maze built into the floor of the church, made of light-colored stone and worn by the feet of pilgrims who have visited this place over the past 800 years. What was the purpose of the maze? And what possible connection did it have with the Christian nature of the building? To understand the Labyrinth of Chartres, one must first look at the intellectual life of the cathedral.

Chartres Cathedral once housed a famous library and school, which has become one of the most advanced centers of learning in all of Europe. The illustrious teachers of this school, such as Bernard de Chartres and Jean de Salisbury, revived Plato’s philosophy and taught a complete program of the seven liberal arts: grammar, logic, rhetoric, arithmetic, geometry, astronomy and music. The cathedral was a place of architectural and intellectual brilliance.

At a time when the sword seemed mightier than the pen and the forces of disorder threatened the creative power of civilization, the clergy and scholars of Chartres were justly proud of their scholarly heritage. They trumpeted their achievement by adorning the front of their cathedral with statues representing the liberal arts – Pythagoras represented mathematics, Ptolemy’s astronomy and Aristotle’s philosophy.

The labyrinth inside the church is ultimately linked to the scholarly and religious character of Chartres. While there were labyrinths in other churches in France, this was the largest and most renowned. There are several ways to understand it. The maze was large enough for a person to meditatively walk along its paths, following the cream colored stones, moving around the semi-circular track, going back and forth until reaching the center . With the attached photo you can follow the path of the Labyrinth of Chartres. Notice that the path takes you near the center, then beats you up and sends you back out again. It’s like so many situations we encounter in life.

Following the labyrinth was like making a small-scale pilgrimage, undertaken inside the church rather than over the dusty roads and mountains of Europe. The center of the labyrinth represented the Divine, or personal salvation, attained after all the winding adventures and misadventures of our lives. But today, the labyrinth can suggest additional values: the desire to find our purpose in life, the search for wisdom and scholarly knowledge, and the attempt to reach our higher selves.

Michael Edward Moore is Associate Professor of Medieval and European History at the University of Iowa. He traveled and studied extensively in Europe. In his spare time, he enjoys hiking and canoeing in nature. This article originally appeared in the May 2022 issue of Little Village.