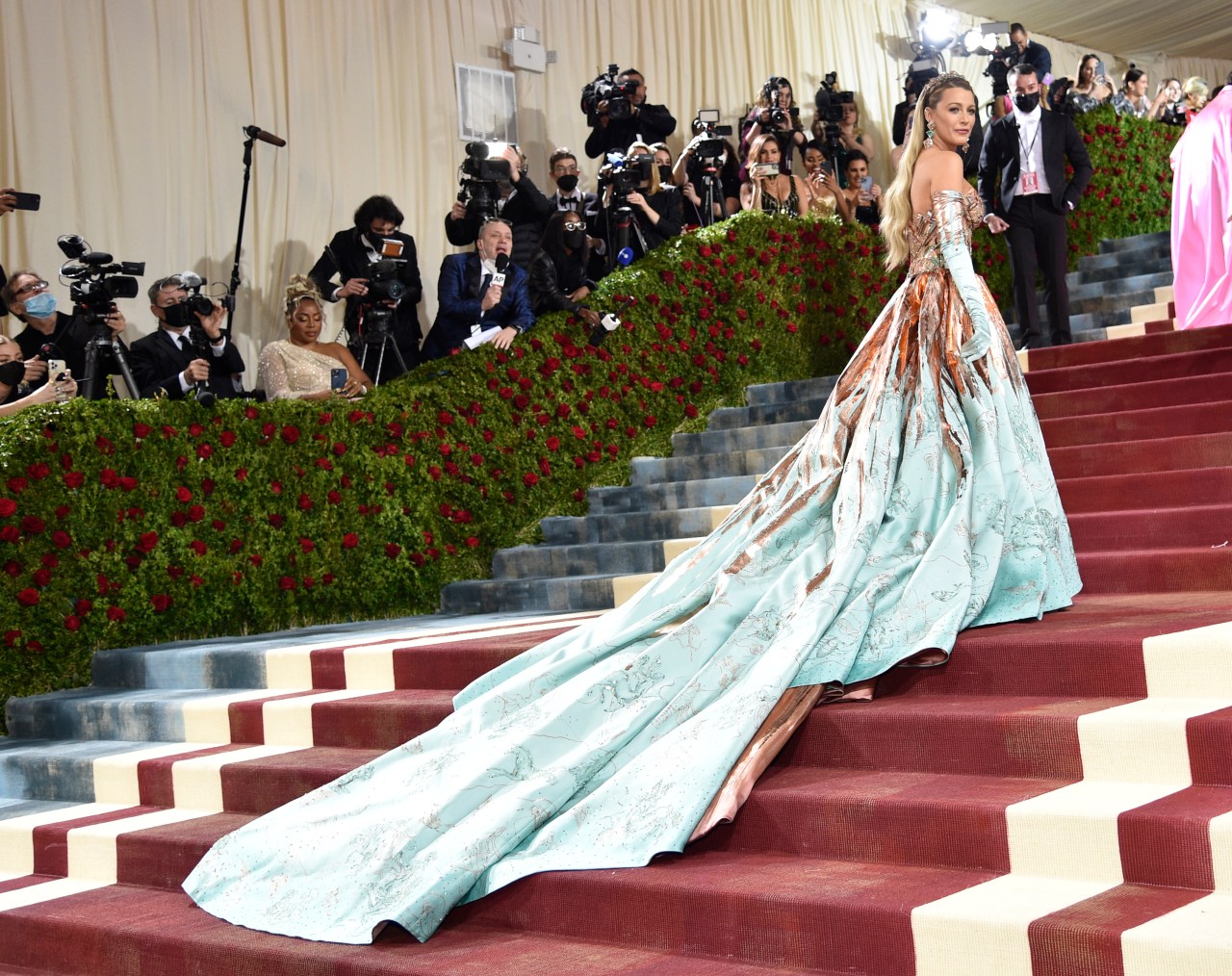 NEW YORK (AP) — The biggest fashion night of the year, the Met Galareturned to the first Monday in May after years of pandemic upheaval with a celebration of American design and a theme of golden glamour.

Blake Lively smiled for the cameras in a big Versace dress, with husband Ryan Reynolds in velvet. The actress, one of the evening’s co-hosts, wore a bronze and rose gold look that changed into a shimmering layer of baby blue when a large bow was pulled. Lively’s look was inspired by the Statue of Liberty, the Empire State Building and the blue ceiling of Grand Central Station.

“Instead of looking to fashion to influence dress, I looked to New York architecture,” Lively said.

Some early walkers interpreted the period theme in black or white looks. Others went with royal purples and golds.

“Black and white are THE colors of the evening,” said Holly Katz, stylist and host of the Fashion Crimes podcast.

Jordan Roth, the theatrical producer, made his own reveal as he stripped off a black egg-like shell from a matching bulbous trouser suit. Janelle Monae offered a regal wave in a bedazzled black and white headpiece and bodycon dress with head covering.

The cast of Baz Luhrmann’s “Elvis” joined forces in sparkling suits, capes and dresses by Prada. The film’s star, Austin Butler, wore a cropped suit and a silk scarf with a jeweled brooch. Luhrmann said his film was, ultimately, about America.

vogue live Co-host Vanessa Hudgens walked up the steps of the Metropolitan Museum of Art in a vaguely Victorian black lace dress with a long train. She was joined by La La Anthony, her fellow Vogue host who wore a dark red look with cutout shoulders by LaQuan Smith.

Anthony said: “These stairs are intimidating.”

And if the return of the Met Gala sounds like one of those moments, it already is.

It was just under eight months since the last galaa annual fundraiser that raises eight-figure sums for the Met’s Costume Institute. Before the pandemic, around 600 A-listers from fashion, sports, music, film, TV, tech and beyond were invited. This year and last, the numbers were closer to 400. The 2020 gala has been cancelled.

Over $16.4 million was raised last year. The star-studded event is the main source of the institute’s budget.

This year’s gala coincides with the opening of the second part of a two-part exhibition to costume institute focused on American fashion and style. The dress code for the evening is gold glamor and white tie, à la Gilded Age, that tumultuous period between the Civil War and the early 20th century known for its robber barons, drama and grandeur.

This year’s climb of the Met’s Grand Staircase brings the gala back to its legendary spot on the first Monday in May, with the official livestream appearing on the Vogue website.

Vogue’s Anna Wintour has led the gala since 1995. She continues to be one of the evening’s honorary co-chairs, alongside designer Tom Ford and Instagram’s Adam Mosseri. the the official co-chairs for 2022 are Regina King, Blake Lively, Ryan Reynolds and Lin-Manuel Miranda.

The cost of a place at last year’s Met Gala started at $35,000, although some attend for free. Celebrities are sometimes accompanied (and their tabs paid for) by the designers who dress them or other companies who invite them. The focus on inclusivity in fashion this year could celebrate and include more unsung designer heroes than usual.

The event is the brainchild of the late Eleanor Lambert, a fashion publicist as powerful as Wintour in her day. In 1948, she needed to find a way to pay for the fledgling Costume Institute, the only department at the Met that was to raise its own funds.

While many on Wintour’s carefully curated guest list follow the dress code, others go their own way. Interpretation is everything. Think Rihanna in a papal hat, Billy Porter as the sun god carried on a litter by shirtless men and Lady Gaga strips off layers as the fashion world comes to a standstill watch.

Opinion: Written by a European for Europeans – Jared Taylor