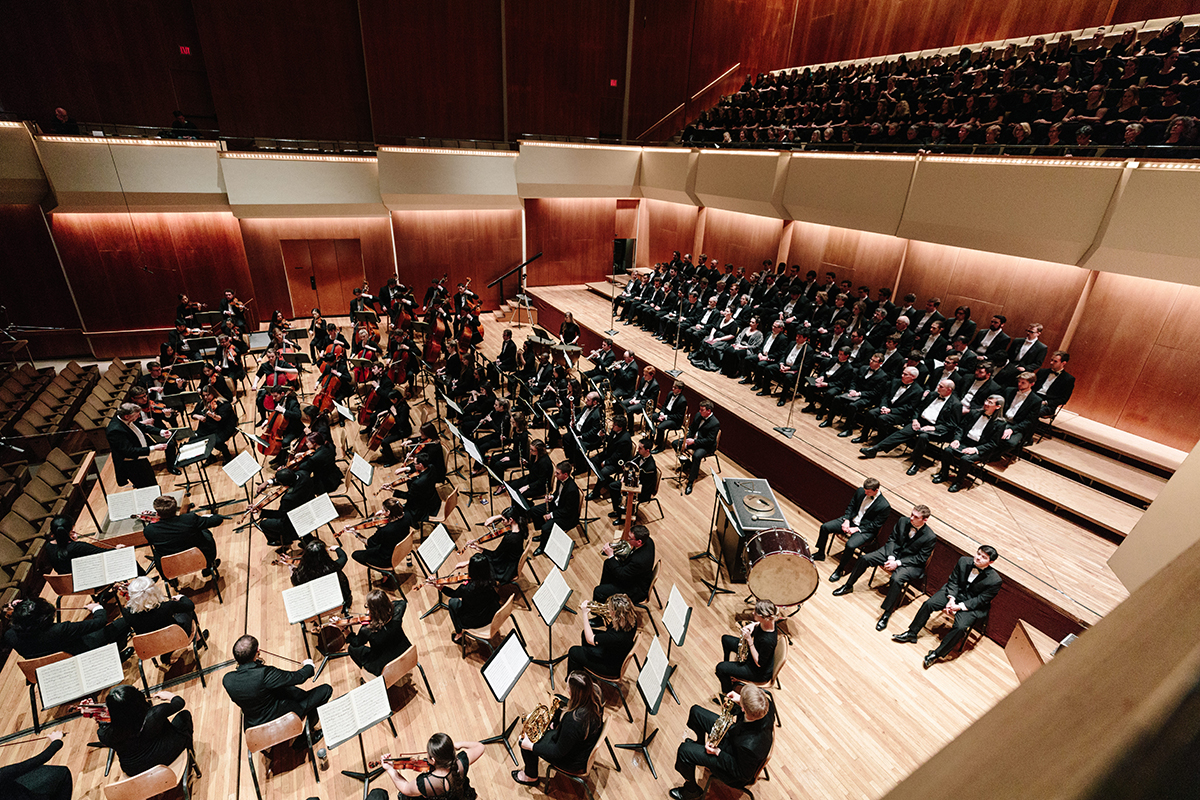 CHAMPAIGN, Illinois – The University of Illinois Urbana-Champaign Music school will celebrate its 125th anniversary with a weekend of concerts.

The concerts, from April 29 to May 1, will showcase the breadth of the school’s musical programs, with performances from jazz ensembles, choirs, orchestras, the Jupiter String Quartet, voice and violin teachers and opera students, as well as a Grammy Award-winning jazz bassist Christian McBride. Performances of the anniversary celebration will take place at Krannert Center for the Performing Arts and Smith Memorial Hall.

In one of the highlights of the weekend, the ui symphony orchestra, Chamber singers and Oratorio Society will perform “Ein deutsches Requiem” by Johannes Brahms, a profound and much-loved work, said Andrew Megildirector of choral activities at the School of Music.

“It’s one of the most beloved pieces in the choral-orchestral repertoire, and it’s one of my favorite pieces,” he said.

the performance is Saturday at 7:30 p.m. at the KCPA. His music is especially appropriate now, Megill said.

“It’s a piece of comfort and consolation for people who have been grieving and losing. Everyone during the time of COVID has lost something, even if they have been spared the loss of a loved one. The room is so full of radiant comfort that it felt right to turn the page and close this year’s chapter,” he said.

“It’s one of the greatest pieces in the Western art tradition that really tackles one of the fundamental problems of being human, which is that we are mortal and we lose those we love. It there is the heartbreak of that, but also the deep joy of having such beautiful relationships and a sense of transcendent love,” Megill said.

The 80-minute piece features two solos, which will be sung by a New York-based soprano Courtenay Budd and voice and baritone teacher Nathan Gunn. Budd is well suited for the challenging soprano solo, which projects both innocence and motherly comfort, Megill said.

Gunn sang the baritone solo in his Carnegie Hall debut in 1997, at a concert marking the 100th anniversary of Brahms’ death. “It was a big step in his career, and it’s exciting to do it with someone who has a long association with the play,” Megill said.

Soprano and voice teacher Ollie Watts Davis will perform “Four Spirituals” with the Jupiter String Quartet. The arrangements of the spirituals are by composition theory professor Stephen Andrew Taylor.

To modify embedded media in the Files tab and reinsert it if necessary.

The concert will open with the Jupiter String Quartet and soprano Ollie Watts Davis, singing teacher and director of the Black Chorus. They will perform “Four Spirituals,” a 2014 arrangement by a composition theory professor Stephen Andrew Taylor.

The Jupiter String Quartet, whose members are artists in residence at the School of Music, commissioned Taylor to arrange the music for its “Rootsongs” recording project. The quartet wanted to work with Davis and also celebrate the influence of black spirituals on other works on the album.

Davis gave Taylor his favorite arrangements of four spirituals: “Give Me Jesus,” “Ride Up in the Chariot,” “Deep River,” and “He’s Got the Whole World in His Hands.”

“They were chosen for their authentic capture of the creators’ diverse expressions – faith, pain, joy, hope – and for deeply personal reasons. I often return to these mediums for shelter, as refuge, to find strength and to reflect,” Davis said.

Taylor said his versions are a tribute to the composers of the arrangements Davis chose.

“I was immediately struck by the beauty of these arrangements. I followed their melodies exactly, as well as the form of each one. At the same time, I tried to take advantage of the different possibilities of the string quartet for harmony, rhythm and timbre,” Taylor said.

He used fast polyrhythms for “Ride Up in the Chariot” and “Deep River” has the violins and viola “gliding in slow motion over a rolling, undulating cello,” Taylor said.

“Steve uses the sound of the quartet’s strings to beautiful effect while honoring the original compositions,” said the cellist. Daniel McDonough of the Jupiter String Quartet.

Davis said it was especially important to her to perform Taylor’s arrangements, as she was able to work with him and have music written especially for her.

“Although I am familiar with many arrangements from this repertoire, Taylor’s arrangements have subtle surprises that keep me present, in charge and in the moment. He clearly studied the arrangements I gave him, but he created something of his own,” Davis said.

String playing is part of the African American musical heritage, and performing with the Jupiter String Quartet is a rich experience, she said.

The School of Music will host an anniversary reception in the KCPA lobby following the Saturday evening performances.

McBride will perform his work”The Movement Revisited – A Musical Tribute to Four IconsSunday at 7:30 p.m. at the KCPA as the culminating performance of the New Awakenings concert series. Barrington Colemanprofessor of vocal jazz studies in the School of Music and director of the Varsity Men’s Glee Club, launched the New Awakenings concert series to reflect on the effects of the pandemic and the racial justice movement over the past few years, and to offer hope and healing.

“The Movement Revisited” – a 70-minute jazz-influenced composition – pays homage to civil rights icons Martin Luther King Jr., Rosa Parks, Malcolm X and Muhammed Ali through words and music. McBride will perform with some of his band members and the School of Music’s jazz orchestraled by the jazz performance chair Chip McNeill. Vocal performers include a choir of campus singers and community choirs, as well as guest artists.

Also on Sunday, a special concert by the Illinois Wind Symphony and Wind Orchestra at 3 p.m. will be followed by a reception in the KCPA lobby for conductors Steve Peterson and Beth Petersonwho are retiring from the faculty of music.

The full program of performances is available in line.

Hazards of the medical terminology of classical languages: everything is Greek (and Latin) for me!