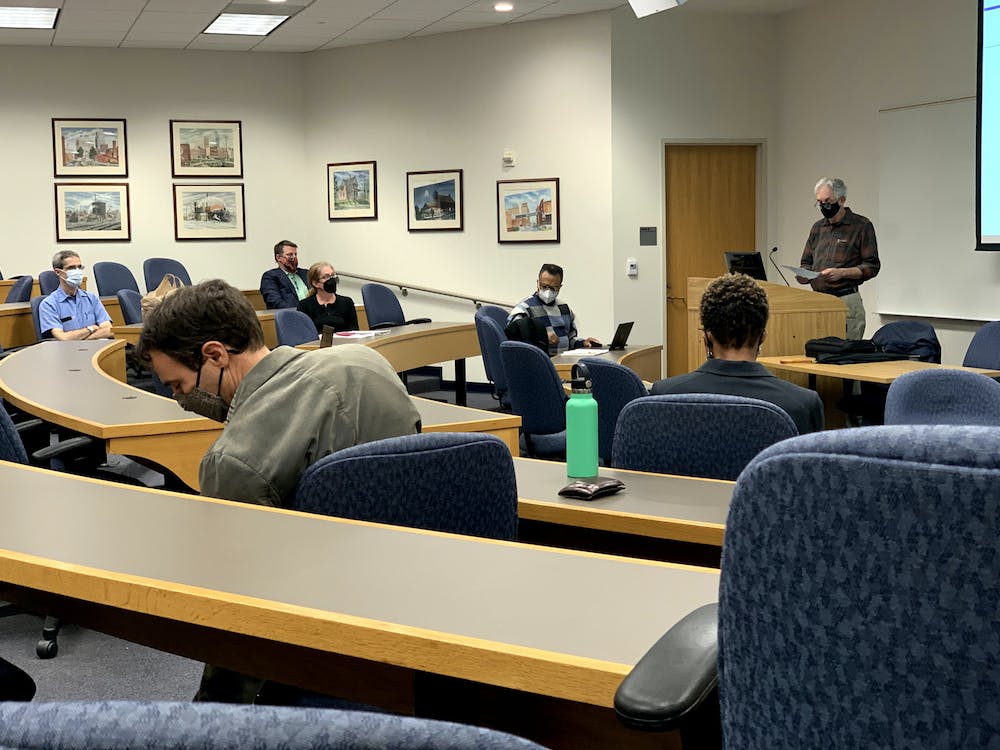 The Arts and Sciences Council approved a new minor and heard a proposal for a new certificate in health policy at its meeting on Thursday.

At the start of the meeting, the Board approved a minor news item titled “Artificial Intelligence: Applications and Implications,” which will be housed in the Computer Science Department. The vote passed with an overwhelming majority.

Nathan Boucher, associate research professor at the Sanford School of Public Policy, presented the plan for the potential certificate in health policy. The offered certificate program is a joint venture between Sanford and the Duke-Margolis Center for Health Policy and is experiential in nature.

“We are seeing growing support from students seeking health policy as a way to expand their skills and eventually pursue a career,” Boucher said. “These students pointed out, and we agree, that what we have now is not what students would like.”

The program would consist of six components, as are all of Duke’s certificate programs. The first of these components is an introductory course – PUBPOL 165: Introduction to the United States Healthcare System – which is already offered at the Sanford School.

Two others would be electives, chosen from a list of approved electives that cover a variety of disciplines, according to Boucher. Traditional certificates require four elective courses, but since this is an experiential certificate offered, there will instead be two “thematic experiences” required of students.

“Thematic experiences will be a 300+ hour experience and a 150+ hour experience,” Boucher said, adding that there are a wide range of opportunities that students are already pursuing routinely that could meet those requirements. ranging from a Bass Connections research project focused on health policy to an internship at a health policy agency.

The last element is a synthesis class that connects the previous five experiments.

However, Council faculty were skeptical that the new certificate was not too different from pursuing the public policy major focused on health policy, or pursuing independent courses and opportunities related to health policy. health policy.

Cultural anthropology professor Lee Baker noted that the required introductory course is already an elective for undergraduate public policy students. He also wondered if the mandatory internship which public policy students must complete could also count towards the certificate in health policy, adding that the certificate program in innovation and entrepreneurship has adopted this policy.

“Yes [interested students] already take [Introduction to the United States Healthcare System] and they’re already doing all of this experiential learning, adding value is just the cornerstone of it all,” Broverman said. “Students [who want to study health policy] are already doing a lot of these things, so what do you see as great value? »

Broverman disagreed with the usefulness of the second point.

“There’s a big conversation going on in the Arts and Sciences Council about trying to drive students away from accreditation,” she said. “The idea of ​​swapping more credentials and putting them [on a diploma]I think that’s something I would be wary of if I went down that road.

The Board will vote on the certificate proposal at its April 28 meeting.

Jose Gonzalez, Associate Professor of Classical Studies, briefed the Board on behalf of the Global Education Committee. Gonzalez said the Committee has begun a study of undergraduate student participation in global education, particularly in terms of how it changes by major and school, among other factors. He also added that participation in study abroad has increased by 20% compared to what it was before the start of the pandemic, calling it “obvious pent-up demand for global education for students”.

Economics Professor Thomas Nechyba presented an update from the Evaluation Committee on the new course evaluation system that was implemented last semester for Trinity College of Arts & Sciences.

Nechyba said the new system was largely successful both in terms of the quantity and quality of responses, which was what the teachers noticed. One of the main improvements Nechyba has noticed is the extent to which course evaluations are shared with students. He added that the vast majority of feedback provided to instructors has been constructive, but one area of ​​concern for him is detecting implicit biases that may be in the responses students give to professors of different demographics.

“Whether there are biases based on various forms of identity is a much deeper question… All of the evidence we’ve reviewed here has nothing to say about it,” Nechyba said. “… [But] we, as a committee, think there is a bias. We think the scientific evidence is there. We think people’s lived experiences tell us it’s there. So we believe it’s there. We just don’t believe we can measure it from the data we have.

Trinity Dean Valerie Ashby spoke about how Trinity can better support higher education. She said there is a dichotomy because graduate student affairs are more or less handled by the Graduate School, while the faculty from which students receive their training are not. Instead, they are affiliated with one of two undergraduate colleges or a vocational school. Ashby highlighted the role of the new dean of graduate studies, whose job it is to bridge this divide.

Get The Chronicle straight to your inbox

Adway S. Wadekar is a Trinity freshman and reporter for the News Service. He also contributed to the sports section.

A Jain, Hindu and Gandhi symposium explores the practice of inner peace in a…