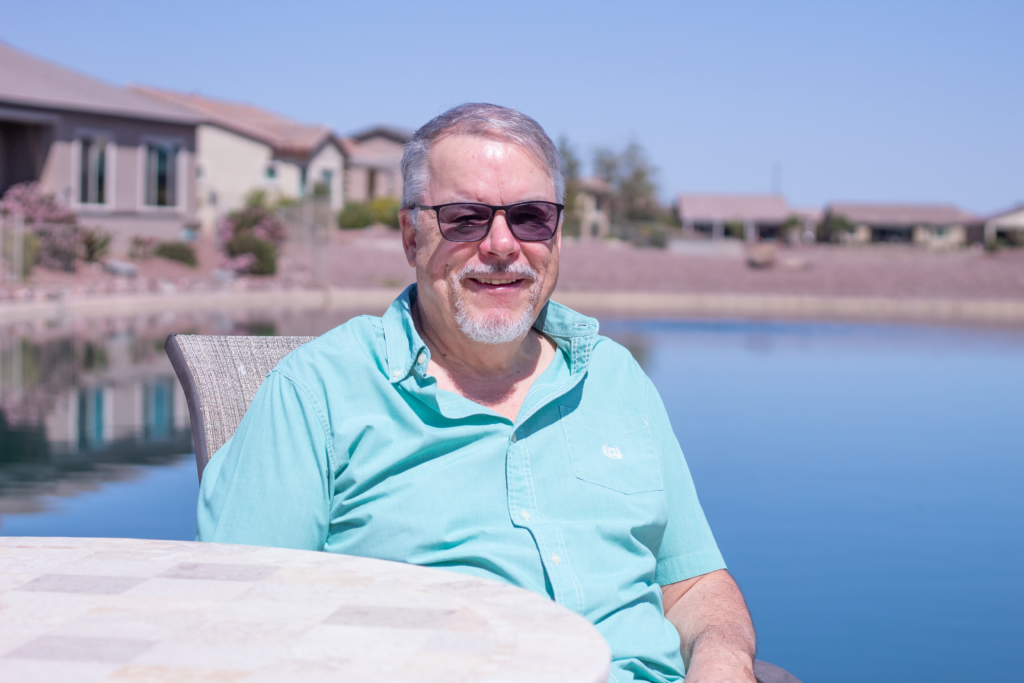 Live and Learn: The Renaissance Man Revels in His Career and Personal Experiences

Call him a renaissance man.

Provincial resident Doug Mossing has seen and done it all – well, almost, anyway.

He spent two decades as a real estate investor with hands-on property management as part of the mix and played a key role in the development of Maricopa’s first apartment complex.

He has written a book, “Successful Real Estate Investing in an Ever-Changing Market,” based on first-hand lessons learned in the business as a licensed general contractor, real estate agent, real estate broker, and building inspector.

But Mossing also has plenty of experience in life’s pursuits.

He has been a musician for 15 years, resuming a professional career from 50 years ago in his native Ohio, and leads three bands.

He also travels the world; he and his wife, Cherie, have visited 63 countries.

“We realize how lucky we were,” said Mossing, 69, modestly.

But good fortune comes to those who earn it.

A new home and a new career
Mossing rode a motorcycle across the country in 1980 – all his belongings on the back – to guard his parents’ Paradise Valley home. He has been an Arizonan ever since.

With some experience in accounting, he started a small bookkeeping service and worked for several CPA firms. In this role he met someone involved in real estate and admits he “started investing in apartments and houses at the worst possible time”.

Between 1983 and 1986, he accumulated 45 rental units across six apartment complexes and two residences. But he bought during a “seller’s market,” paying high prices with low down payments and substantial mortgages. The elimination of the capital gains tax break contributed to the acceleration of its debt load.

Mossing decided to pay off the mortgages rather than declare bankruptcy. The first three years of the recovery period, he writes in his book, were particularly difficult.

“It took me seven years to get out of this hole, but I paid back everything I owed,” he said.

Learning from his early setbacks, Mossing began successfully investing and managing properties throughout the valley in the early 2000s. He had as many as 17 people working for him at a time, but he was always heavily involved in everything from maintenance to rent collection.

During the compilation of his book from 2000 to 2001, he noted that “credit card debt had reached unprecedented levels and savings per capita were lower than ever.”

“Because so many unworthy people have been granted credit in recent years, I predict that defaults, foreclosures and bankruptcies will increase in record numbers during the 2000s,” he wrote at the time. “With this, inflation will rise and (predictably) unemployment will rise. With rising unemployment, the number of defaults, foreclosures and bankruptcies will continue to rise.

Of course, all of this happened during the Great Recession of 2007 to 2009. According to a 2011 report by the Federal Crisis Investigation, the period of severe economic decline was caused by a collapse in the real estate market after the Total mortgage debt has swelled due to federal policy encouraging home ownership and low interest rates. Subprime and adjustable mortgages enabled borrowers who otherwise might not have qualified for the generous home loans they could not afford when variable interest rates soared and housing prices have stagnated.

Market issues
Real estate market trends have been incredibly consistent since the 1930s, according to Mossing. The differences are in how long a seller’s or a buyer’s (for investors) market lasts before a change takes place.

“It’s a natural progression,” he said. “They say the stock market is driven by greed and fear; well, so is the real estate market. Right now we’re going to go on for two, three, four years and then have another bubble. But not as important as in 2007 or 2008.

“Even though the markets will drop significantly, say in about five years, it won’t be as dramatic in communities like Province because of the baby boomers. It’s a huge population, and they’re going to keep the demand for this type of retirement community going.

Maricopa, of course, has worked hard to diversify its housing portfolio. Mossing worked part-time for 17 years for Indiana-based Englewood Group as a broker in Arizona for its property management arm. He estimates the business had up to 2,000 apartments statewide.

“The City had come to the same conclusion. The leaders really welcomed us with open arms,” he recalls. “I said to Englewood, ‘You need to explore Maricopa because there’s a huge shortage of apartments there.'” In fact, there wasn’t.

Mossing scouted potential sites for the Oasis at The Wells complex which opened in 2021. (He retired from his work with Englewood in 2019).

The Mossings moved to Maricopa in 2005 to escape the booming Phoenix area. Despite the population boom here, the benefits remain, he said.

At the time, his wife was hired as a laboratory director at Casa Grande Medical Center. Mossing knew the area from his seven years of home inspections.

“We inspected the entire area and felt the best value was here in Maricopa,” Mossing said. “Traffic is pleasant compared to driving in the valley. Maricopa is kind of on its own island and I like that.

Global perspective
Speaking of islands, the Mossings visited several during their travels. Together for two decades, Doug and Cherie have traveled every year except in 2020, which was affected by COVID.

Some trips involve three or four countries (Australia, New Zealand and Fiji, for example), while others focus on just one. Sardinia and Sicily, the two largest islands in the Mediterranean Sea, are a possibility for 2022.

“I think I’ve pretty much finished my travel list,” Mossing said, “but Cherie has places she wants to go. We haven’t been to India and Italy is a fantastic place to go. I want to go back, especially Rome, the history of the world has really soaked in. You can see the evidence, and the Italians really take care of their artifacts.

Mossing has snorkeled the Great Barrier Reef and dived surrounded by 50 sharks (without a cage) in Fiji. It remains one of his most exhilarating experiences.

However, these are not his only adventures.

“We have done African safaris in Tanzania, Botswana and South Africa, Zimbabwe and Zambia. I was able to get into a small propeller plane and we had trouble landing because there was a giraffe on the runway,” he recalls. “We approached the cheetahs, and they just sat there and watched us.”

The Mossings enjoy visiting art museums and bringing home souvenirs to remember their travels. They also enjoy television programs such as “The Amazing Race” and see sites they have visited in person.

Climb the heights
Closer to home, Mossing is preparing for his 14th Grand Canyon hike. It’s a hobby he says he picked up as soon as he drove through Arizona after coming from the flat landscape of northeastern Ohio.

“Once in August we camped on the north shore. The first night my water froze. By the time we hit bottom the next day it was 110 degrees – a temperature change of 80 to 85 degrees in eight or nine hours.
Mossing helps lead a group of local hikers and enjoys the solitude of being alone.

“I love it. I love being in nature,” he said. “Our cabin (at Forest Lakes) is in the largest ponderosa pine forest in the world. All the animals you encounter – cougars, bears, hundreds and hundreds of elk, maybe a hundred deer. It’s just fun to stop and watch them.

Hiking, he says, has many benefits.

“One of the reasons I hike is because as a saxophonist I need cardiovascular work. Otherwise I’m not going to last those eight years (he hopes to keep playing).

Musical melodies
Mossing started playing the saxophone in school. Friends then formed a rock band, where he took up the keyboard and later the flute and other instruments. The emphasis on classic rock has led to up to 300 concerts a year in Ohio and Michigan. Disco and its growing presence in clubs was one of the factors leading to a career change.

But 25 years later, a little saxophone gift from her sister reignited her passion. He played in a musical group at his daughter’s church and “I just felt all the emotion, how wonderful it was to play.”

After moving to Maricopa, he formed a band with other residents of the province. They played up to 40 times a year before COVID. Today his three bands include Jazzona (jazz), 11th Hour (various dance band) and Classic Winds (classical music, show tunes and big band songs). They perform at corporate events, holiday programs, restaurants and more.

Mossing’s first instrument, the saxophone, remains his favorite, which has earned him a special affinity for Jazzona performances.

“It’s such a release to play for people who really appreciate it, and they recognize you for the work,” Mossing said. “I said [singer] Elise [Hurst] I would try to play another eight years; this is my target. She goes out of her way to pick songs that have really good sax parts.

Just consider it one of the many high marks in Mossing’s most interesting career and life.

This story first appeared in the April issue of In Maricopa magazine.

A Jain, Hindu and Gandhi symposium explores the practice of inner peace in a…