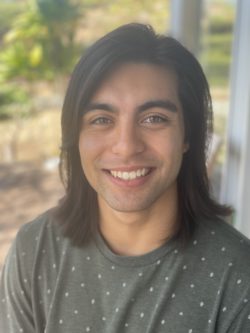 Na Heona Molokai (Artists of Molokai) is a group creating an exhibition titled “No Stop Light: Molokai” for the 3,600 square foot Downtown Art Center in Honolulu in May 2022. In the coming months, we will feature each artist .

What is your name and your connection to Molokai?

I am Kahale Naehu-Ramos. I’m from Lahaina and moved here when I was seven with my mom and sister. My stepfather Hano is from the east end of Molokai. I went to school and high school here, and now I’m done with college in California, so I’m back.

What are you doing?

I work for a company called Ka Hale Hoaka, founded by my mother, Maile. It is an online learning school. We supplement Hawaiian culture and language in schools, for example, the school in Kualapuʻu uses our curriculum. We also offer home tuition for adults and children. I am responsible for media production. I do filming, video and editing. I also help with the program because I have a background in Hawaiian immersion. From kindergarten to sixth grade, I was in Hawaiian immersion and stayed near ‘Olelo Hawaii. I am a second eye when my mother creates programs.

What are your plans for your future?

I graduated in music and would like to do my own thing on the side but for now I am dedicated to our business. I believe in its mission and its objectives. There are a lot of things that interest me regarding media production, music and music production.

How did you start as a musician?

It started in Hawaiian Immersion because mele is important for learning Hawaiian. We would sing a lot. In fifth grade, we had a ukulele lesson. I was the worst in the class. But I tried again in sixth grade and since then I’ve been making music. When I was in high school, I decided to study music, but I didn’t want to go to a conservatory. I went to Pomona College, a liberal arts school in Southern California, and continued to take music lessons. I studied classical guitar and in my senior year I did my thesis on Hawaiian Slack key guitar. It was my own research. I was in a rock band in college, so I played all kinds of music. I was also the sound engineer for a musical produced by a college. I recently did some background music for our company, and did some commercials as well. If anyone needs custom tracks or a sound engineer, contact me! I didn’t really start singing and acting until college. I started recording doing a lot of amateur recordings of me and my friends. Recently, I’ve been professionally recording music for clients and mixing and recording for my parents, who are also musicians.

Who inspires you musically?

Recently Gabby Pahinui has been a big influence on me and other key players like Jeff Peterson. I like Cecilio and Kapono as well as Jack Johnson. I also like the Beatles. I love all genres of music and get a lot of inspiration from movie and video game soundtracks.

What are your plans for the art exhibition?

I will do a set of guitar and vocals similar to those inspirations I mentioned and some covers, maybe some originals.