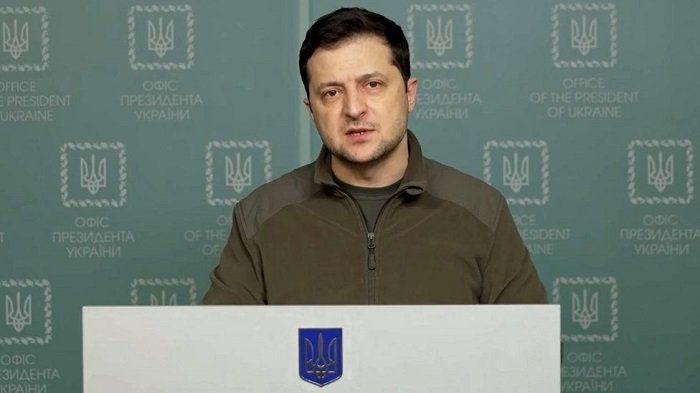 Who can say for sure if Zelensky is already playing a part in the storyline of the fourth season of “Servant of the People” or actually leading a beleaguered nation at war? I mean the only thing the man could show on his resume, as all experience is his hilarious career in the satirical comedy genre. Guess what? Play the role of a high school history teacher who accidentally becomes president of a completely corrupt country called Ukraine ruled by a company of thugs.

One thing is certain, its performance is irreproachable. He had proven himself capable of playing the most inappropriate and difficult role. In real life, he is definitely Jewish, but he does not feel insulted by the slanderous name-calling of his race by far-right nationalists and members of the Azov Battalion. Who knows maybe he thinks he plays a part in the comedy script. Thus, being “in character” makes him immune to insults and open racial prejudice.

In this regard, there is certainly an uncanny resemblance between Zelensky and Clayton Bigsby. You know Bigsby, the blind black white supremacist who hates his own race like the plague. The true white supremacists needed him so badly that they elevated him to the rank of leader and the poor guy can’t finish a sentence without using the ‘n’ word. He walks around shouting “white power” and has published half a dozen books, some with titles like “Black Stain.” Last we heard of him he was campaigning for the office of President of the United States of America, until a little earlier before his KKK hood was removed and his supporters saw his real colors.

It only takes a little research to learn that Ukraine is a nation-state still in the making. Its long and illustrious history spans only three decades. Historically, a Ukrainian was either a little Russian or a Galician. I believe that it was the Soviet power that gloriously granted Ukrainian citizenship to the people independently of Russia. Who would have thought that today’s Ukrainians would be so ungrateful to the USSR. I mean the USSR raised Ukraine from a remote Russian province to a republic while neglecting the famine of the 1930s.

So, coupled with the volubility of the information age of the 21and century, the fact that its statehood is still in its infancy makes it vulnerable to all kinds of extremism and comic twists unthinkable in any other country.

Here are some selected antics that are uniquely Ukrainian.

1-Servant of the People

But even in character, Zelensky is a high school teacher who is elected to the presidency solely by virtue of the torrents of profanity he unleashes on government officials.

2-America-Designated Colonial Power of 21and Century?

I know the presidents of the United States are informally called the leaders of the free world. It might even be true and maybe China and Russia, as well as the Brics countries, are secretly trying to break this unipolar world order. But for a leader of a sovereign nation to acknowledge this in a speech to the United States Congress is quite unusual.

No President of the United States is in charge of another corner of the world beyond the shores of his sovereign territory. I don’t think even Americans like their presidents to be viewed that way, because it’s a vicious affront to international law and order. I’m sure most Ukraine sympathizers in the West rolled their eyes in embarrassment when their idol Zelensky bestowed Joe Biden with the title “leader of the world.” Something a high school graduate probably won’t say in public.

By this shameful statement he made to the United States Congress, Zelensky proved to the whole world that he is not just a rookie politician, but an ignorant and ignorant buffoon. It was only during the colonial era that this proved true for the imperial powers of Europe. I don’t think the United States likes to be labeled as a colonial power of the 21st Century.

False propaganda as a weapon of war was indispensable in the bygone years of Nazi Germany. It was elevated to art by Joseph Goebbels. But the cyber fiber has now denied the monopoly of information reserved for a few elected officials.

I can imagine the number of Western public relations experts who volunteered their services to Ukrainian leaders. But I don’t think Zelensky made the right choice. He must have been wooed by a wacky neo-Nazi warrior from Big Lie who worships the Nazi propaganda czar.

Zelensky’s daily briefings are repetitive white lies. Every day he publishes reports of the incredibly growing Russian human causation of the war. He dismisses the Donbass genocide as “nonsense”. He claims that nearly 100,000 Russian troops are bogged down in their trenches. He solemnly declares that half of Russia is opposed to the special military operation in Ukraine. He totally rejects his forces using the Ukrainian as a human shield and insists that the Russians deliberately target maternity hospitals to kill newborn babies.

It took us back to the dark days of Goebbels’ big lie theory as a sure weapon of conquest and conquest.

Anyone who takes a passing interest in the “Democracies of Eastern Europe” cannot fail to notice the grotesque desire to pass for a Westerner. Sometimes it takes such a comedic turn that it’s a lot of fun talking to an aspiring Eastern European from one of the Soros Foundation democracies.

So Mr. Zelensky and his cohort of Soros “Western” Democrats ditched their suits for camouflaged t-shirts and baseball caps. It’s their idea of ​​being “cool”.

What makes these crude imitative cat tendencies more pathetic is that Ukrainians don’t learn from the mistakes of Poles and Hungarians. The latter quickly realized that they were dancing to aboriginal tunes on the borders of the Western world and resolutely recovered their glorious native civilization. The fact is that the next generation of Eastern European leaders will look more like Viktor Orban than Ingrida Simonyte. But Zelensky seems to misinterpret major trends in his own part of the world.

5-The Standing Ovation at the US Congress.

Zelensky seems to forget that even if he was talking about spotting a flying pig among the Russian army, the US Congress would give him a standing ovation. The US Congress decided to give that Zelensky guy a “standing ovation and a locomotive” – in Salingerway’s words – before he delivered the historic speech.

America never fights any other country’s war. America uses other countries to advance its selfish private interests. They shamelessly use juvenile Ukrainian leaders to fight Russia. They never commit “boots on the ground” even if the Ukrainian is burning like a bonfire; the standing ovation given to Zelensky was a substitute for actually helping Ukraine on the battlefield.

When Zelensky brutally challenged Russia, he had relied on the United States and its NATO allies to send ground troops to his country. But everyone except the Ukrainian leadership knows that the United States would never try to engage Russia directly. Poor Zelensky, inspired by a group of hysterical Russophobic journalists, has brought Ukraine into a clear and present existential threat.

__
To publish article on borkena, please send your submission to [email protected]

10 Broadway Stage Recordings Streaming Now (And Where To Watch Them)