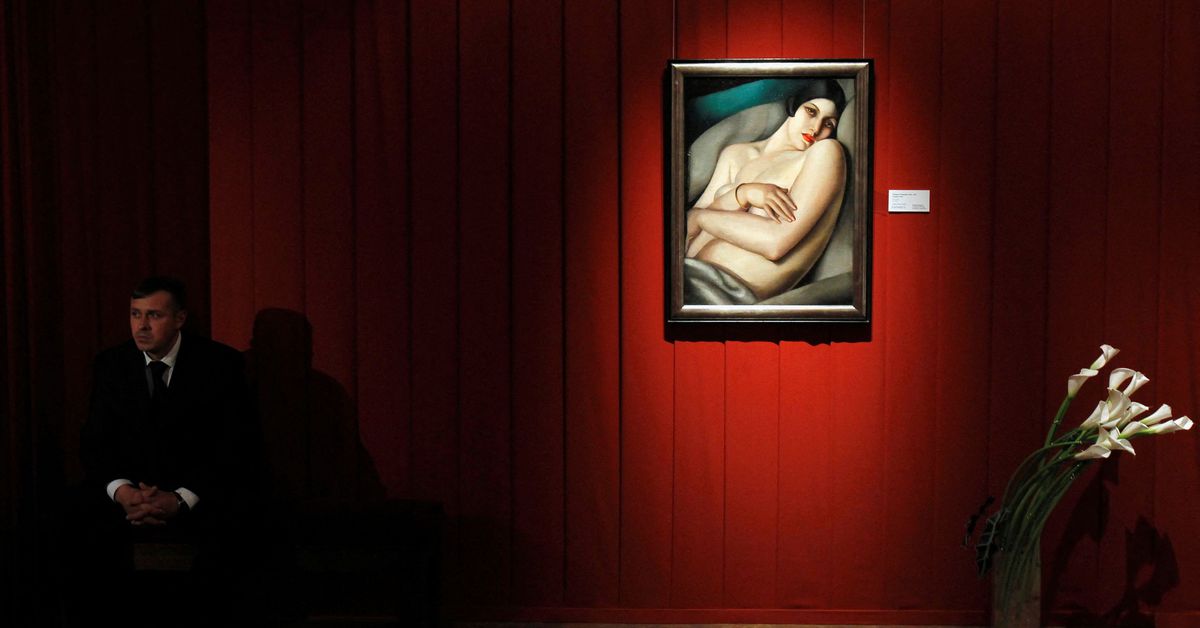 LONDON, March 16 (Reuters) – Auction houses Christie’s, Sotheby’s and Bonhams canceled sales of Russian art in London in June, as part of the art market‘s response to Western sanctions on Russia as punishment for his invasion of Ukraine.

Sotheby’s said it canceled its Russian art sale in London in June. He refused to give a reason.

“We are absolutely rigorous in adhering to current sanctions and are closely monitoring any list updates,” he said in a statement.

“Although Christie’s current sales market in Russia as a whole is relatively small, we have a responsibility to respond to the needs of our customers and to geopolitical events beyond our control,” Christie’s said in a statement. The auction house added that it was performing “enhanced due diligence” on politically exposed persons and those with connections to sanctioned jurisdictions.

Bonhams did not give reasons for its decision.

Western countries have taken unprecedented steps to sever ties with Russia, including freezing bank accounts and imposing sanctions on Russian billionaires following the February 24 Russian attack on Ukraine, which they call it a “special operation”. Read more

Britain on Tuesday imposed sanctions on hundreds of Russian individuals and entities as it sought to catch up with the European Union and the United States in targeting people accused of supporting Russian President Vladimir Putin . Read more

Despite these measures, some dealers and advisers told Reuters that the international art market as a whole should not be affected, as the number of Russian buyers has declined since the financial crash of 2008 and represents only a small part of the market.

But while auction houses have little financial impact, doing business has been made trickier for collectors of Russian art – as well as those who work with them on business – due to fears of dealing accidentally with Russians who might end up on sanctions lists, for example art market advisers.

“It makes it harder for Russians and for buyers as well, because you don’t want to be caught buying something from a Russian at this point,” said partner Barbara Guggenheim. American art. consulting firm Guggenheim, Asher Associates.

New York art lawyer Thomas Danziger said he advises clients to be wary of deals with Russians who may be on the sanctions list in the future.

“We advised a client who was considering making a loan to a Russian museum to back off the table,” he said.

He said he feared the artwork could get stuck there: “As Western sanctions mount, we felt there was a real risk that the client’s artwork could be a one-way trip to Russia and end up being expropriated by the government there.”

Reuters did not identify any such incident.

Some Russian art collectors and oligarchs are already keeping a low profile so as not to draw attention to themselves.

“There will always be a market for strong coins, so that hasn’t changed, but the collectors I know, some of whom are in Russia and some in the West, keep their heads down,” James Butterwick said. , a Ukrainian and Russian art dealer in London, who has repositioned his business to focus more on Ukraine in recent years.

“I asked for loans from Russians, for exhibitions next year, and they were very happy to grant them to me, anonymously.”

A London spokesperson for auction house Phillips said that although it is not holding a Russia-specific sale, it has stepped up its due diligence: “We are on high alert all the time and At the moment, of course, we are extremely vigilant”.

Earlier this month Matthew Girling, the former CEO of Bonhams, told the Art Newspaper that people should boycott Phillips, which is owned by Russians Leonid Friedland and Leonid Strunin. Friedland and Strunin also own the Mercury Retail Group, one of the largest luxury goods retailers in Russia.

Phillips, who posted a statement in support of Ukraine on Instagram, did not respond to Reuters’ request for comment on the boycott calls.

Phillips’ sale in London on March 3 showed no signs of a successful claim and the auction house said it had donated the £5.8 million ($7.59 million dollars) that she brought in from the buyer’s commission and premium to the Ukrainian Red Cross.