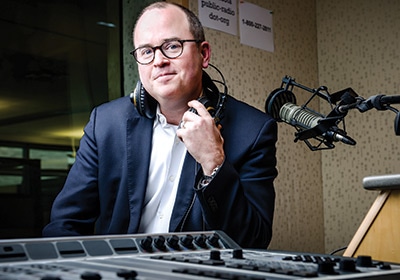 Dave Kansas, a key executive of American public media group (APMG) since 2011, will leave the association due to a management reorganization developed by new CEO Jean Taylor.

She described a staff restructuring in an internal company memo last week.

“To accelerate our Audiences First 2025 strategy, we are eliminating our two-division (APM/MPR) structure,” according to an APM/MPR press release issued late Monday. “This shift will allow us to operate as one organization with multiple audiences and brands, resulting in stronger alignment and collaboration across the organization and improved efficiency.”

The public media organization refused to release the internal restructuring memo to Twin Towns Affairs. However, a spokeswoman provided the news from Kansas in a written statement. “Following this [restructuring] change, the position of President, APM, has been eliminated and Dave Kansas has elected to leave the organization,” spokeswoman Tsering Yangchen said in the statement.

“Dave has made significant contributions over his 10 years and has agreed to stay on for a brief transition period,” Yangchen said in the statement. Kansas was not immediately available to comment on his tenure in public media or his career plans.

Kansas is among a large group of print journalists who have made a career leap into public broadcasting. When he was hired in 2011, the advertisement stated that he had experience in numerous positions at Dow Jones & Co. and The the wall street journalincluding Reporter, Associate Online Editor, European Markets Editor and Chief Markets Commentator.

Nancy Barnes, former editor of the Star Tribune, later became senior vice president of news and editorial director of National Public Radio. Sacha Pfeiffer, who was part of a Pulitzer Prize-winning reporting team that investigated clergy sex abuse for the Boston Globe, is now a correspondent and guest host for NPR.

Taylor, who served on APMG’s board of directors before becoming its chief executive, also has a background in the press. She is the former chair of the board of the Star Tribune, which is owned by her father, Glen Taylor.

In an October profile in TCA, Taylor said she wants to spend time “listening, learning and evaluating” before making major changes to the organization. She spoke with employees, donors and other stakeholders

While McTaggart has spent most of his career in public media, Taylor has extensive experience in the private sector. She was an executive at Taylor Corp. for 16 years. Prior to becoming CEO of APMG, she spent 11 years in what she describes as “active governance”.

She served on boards and also worked as an advisor “to actively support and assist management as they move businesses forward,” she said. After analyzing many different companies and organizations, Taylor leveraged this experience to assess how APM and MPR leaders and structures served their audiences.

Early in its tenure with American Public Media, Kansas made a interview with Twin Towns Affairs.

When asked in 2013 what he does as COO, Kansas said, “It’s very eclectic. I’m responsible for all content and, just kidding, everything from Bemidji to the BBC, from checking the operation of transmission towers to our business program, Marketplace, to hosting the Mormon Tabernacle Choir.

At the time, Kansas explained why working in public media was a good fit for her. “It miraculously combined my background in business journalism with my love of music, especially classical music,” Kansas said. “If I had written my own description of a job that I would love, I would have struggled to find anything more appealing.”

Prior to transitioning into a leadership role in public media, Kansas was well known nationally in business journalism circles. In 2006, he was president of the Society of American Business Editors and Writers.

Locally, Kansas became director of the Johnson Center for Journalism and Communication at Bethel University in 2016. He took on this role at the Arden Hills campus in addition to his full-time position in public media.

“Loyal reporters have a special and deep interest in seeking the truth,” Kansas said in an interview published on the Bethel website. “I think in the current climate – where people have a complex relationship with facts – that the search for truth is more important than ever.”

Kansas, a native of St. Paul, did not graduate from Bethel. He started his undergraduate career at Macalester College, where he played football. He then transferred to Columbia University in New York and earned a bachelor’s degree in history.

Kansas is a 1985 graduate of St. Paul Academy and Summit School, where he currently serves on the board.