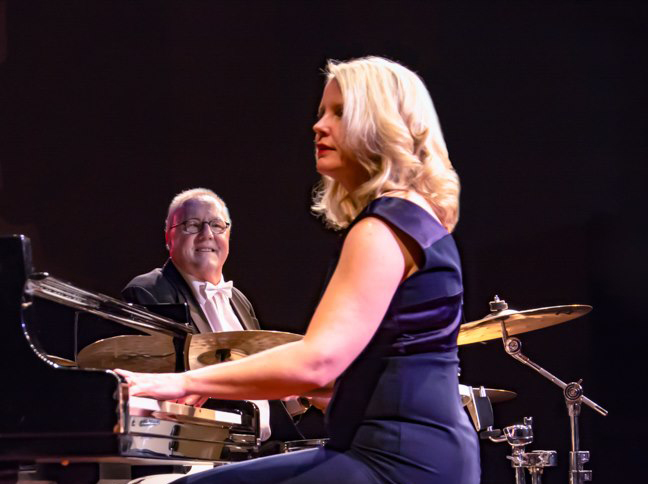 MANISTEE — At first glance, Carrie Selbee and Roger Tarczon might seem like an unlikely musical duo because of the paths they’ve followed in music over the years.

Selbee is known to many in this field, having made a career as a classical music performer and teacher. Tarczon comes from a background as a rock and roll percussionist, playing with local rock band Red Apple Road and spending over 20 years in the Los Angeles area working in studio music.

What they created are two very distinct, yet diverse sounds. However, these two musicians show that it is possible to bring together a new sound for each other.

Over the past four years, this sound has been attracting the attention, and especially the ears, of music lovers in this region in a very positive way. The collaboration had a unique beginning that began at Manistee United Methodist Church.

“I’m the music director for the Methodist Church,” Selbee said. “Roger played drums in our church band, and then we both started teaching at our church music school called River City Music School.”

Tarczon said they had been doing Sunday service at church and school when they discussed the possibility of diversifying their music.

“We thought ‘why don’t we just make a band,’ but I thought maybe that was too big and I thought we should try to play just the two of us,” Tarczon said. . “It’s a little easier that way because we were looking for more restaurant gigs and weddings and things like that.”

Selbee said she also sees it as an opportunity to broaden her musical horizons.

“I come from a classical background and thought it would be interesting to try new styles,” she said. “I started doing boogie woogie or pop styles and even now I’m learning jazz piano.”

Tarczon said it was a good working agreement in terms of how they came together on the music they perform.

“It’s like that old saying in ‘opposites attract,'” he said.

Selbee said what makes the collaboration work is the fact that they each have careers in music and know what it takes to be successful.

“It’s not something incidental to us, and luckily there’s been a living from the music at Manistee,” she said. “Roger has also done this while working in the studio and playing gigs or teaching. We’re really compatible musically because we’re always trying to make the best sounding music.”

“It’s nice to have someone to play with who looks at music that way,” Selbee said. “We do a mix of pop and light jazz and on top of that I started singing two years ago because we had always played instrumentals and people like to hear the lyrics.”

“She started taking singing lessons from a great singing teacher in New York and after just six months she was singing as well as most people do after six years,” he said. “That was pretty cool.”

Selbee said she enjoys performing Carole King and Nora Jones covers as well as other familiar songs. She also likes to throw in a boogie woogie song or two to pick things up.

“These are things that lend themselves to the piano, but Roger steals the show on everything,” she added with a laugh. “We make songs that we love to play and that people love to hear.”

Tarczon said they were geared more towards piano music songs and left the guitar music to other bands in town.

“People like Tim Krause and BVO are doing more guitar-type things,” he said. “We have gigs coming up at the North Channel Brewery and Taco ‘Bout It (Mexican Fusion), but they’re also calling us up to the Ramsdell Theater to play for their gala, so it’s cool to have that kind of mix. “

Selbee said they both do things outside of their duo performances. Roger has gigs, and a few months ago he played with Kenny Rogers’ band. Selbee will do things like perform with New York Broadway singer Karen Curlee every summer at the Ramsdell Theater and she’ll be the theater’s musical director this summer.

“We’re so busy with all of our music that it seems like it’s 24/7 sometimes,” Tarczon laughed.

Selbee jokes that for Tarczon, the drums are almost an obsession for him. He was a percussion technician at the Interlochen Arts Academy for about nine years, where he looked after nearly $3 million worth of percussion instruments.

“If he’s not playing drums, he’s working on drums or watching drums,” she said.

The couple did some studio recordings in Traverse City and look forward to doing so again in the future once COVID-19 restrictions ease. They have performances scheduled for the coming months.

Learn more about the duo by searching for “Carrie and Roger” on Facebook or on carrieandrogermusic.com.