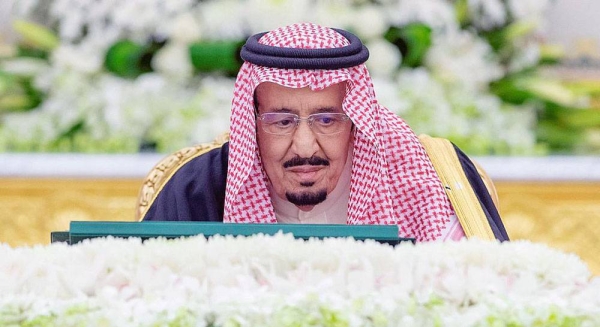 Riyadh — The Council of Ministers session, chaired by the Custodian of the Two Holy Mosques, King Salman, at Al-Yamamah Palace in Riyadh on Tuesday, reviewed and monitored the fluid developments the world is witnessing at the political and security levels, particularly regarding the Russian-Ukrainian conflict.

The Cabinet, aligned with the position of the Gulf Cooperation Council (GCC) on the Ukrainian crisis, affirmed support for international efforts to achieve de-escalation in Ukraine through dialogue and diplomacy, and to restore security and stability and provide a platform for holding negotiations leading to a political solution to the crisis.

The Cabinet also appreciated Saudi Arabia’s affirmation at the Munich Security Conference in Germany to support efforts to ensure security and stability in the Middle East and around the world.

He sought to work with international partners to end the Yemeni crisis through a comprehensive ceasefire and a solution through the three benchmarks (the Gulf initiative and its executive mechanisms, the results of the comprehensive national dialogue and UN Security Council Resolution 2216).

The Cabinet also welcomed the UN Security Council resolution to classify the Houthi militia as a terrorist group and extend the arms embargo to all members of the militia. Previously, it was reserved for certain people and companies. He expressed his aspiration that the resolution will end the terrorist acts of the Houthi militia and its supporters and neutralize its threat against the Yemeni people and international peace and security.

The Cabinet also reiterated Saudi Arabia’s unaltered position on the importance of making the Middle East a zone free of weapons of mass destruction and its remarks during its participation in the Conference on Disarmament in Geneva on 28 February 2022.

He supported cooperation to prohibit and limit their spread, in addition to the importance for all countries to honor their commitments to the Treaty on the Non-Proliferation of Nuclear Weapons and the Kingdom’s contribution to efforts in this regard.

At the beginning of the session, the Cabinet, on the occasion of the day of the foundation in 1139 Hijri (1727), recalled the virtues of Allah on this safe country, the first of which is Islam and the honor of serving the two holy mosques and their visitors. , the virtue of unifying and laying the foundations for peace, stability and justice, in addition to what it has achieved of development and rebirth at all levels and its prestigious status among nations.

The Cabinet thanked the Heads of State and officials of brotherly and friendly countries for their noble sentiments towards the Kingdom on this occasion which celebrates the history of a country founded on the pillars of ambition and faith through all its historical phases to be a beacon of construction and civilization.

The Cabinet considered the telephone call that Prince Crwon Muhammad Bin Salman, Deputy Prime Minister and Minister of Defence, received from French President Emmanuel Macron, during which they reviewed the latest regional and international events, mainly conditions in Ukraine and their impact on the energy market, and Saudi Arabia’s assertion of maintaining stability and balance in oil markets and its commitment to the OPEC Plus agreement.

The Cabinet has also reviewed the content of the phone call between the Crown Prince and Nigerian President Muhammadu Buhari.

Acting Media Minister Dr. Majid Al-Qasabi in a statement to the Saudi Press Agency (SPA) said the Cabinet reviewed various talks and mutual visits between Saudi officials and other countries with the aim of further strengthening relations and enhancing friendship, cooperative relations and collective action in a way that achieves common interests and contributes to the development and prosperity of the region and the whole world.

The Minister also noted that the Cabinet reviewed the contents of the 26th Europe-Gulf Ministerial Meeting, which underlined the importance of intensifying joint action for international peace and security and strengthening cooperation in the field of environmental preservation and the fight against climate change. He referred to Saudi Arabia’s efforts under the Saudi Green Initiative and the Middle East Green Initiative which contribute to achieving the global goals.

The Cabinet also referred to the 2022 International Petroleum Technology Conference held in Riyadh with the participation of ministers, experts and interested personalities from 70 countries and its affirmation on Saudi Arabia’s efforts to ensure the resilience of the three pillars of energy – the security of important energy supply, the ongoing economic development through the provision of credible energy resources and the fight against climate change.

The Cabinet praised the ability of the Saudi Arabian Oil Company (Saudi Aramco) to explore several natural gas fields in the central region, the empty quarter, the northern border region and the eastern region.

The Cabinet reviewed Saudi Arabia’s ranking as number one in the field of digital service provision and its development in the Government Electronic and Mobile Services Maturity Index – 2020 published by the Economic and Social Commission for the Western Asia, a crowning achievement of integration and joint action by public institutions to achieve public digital transformation, which is one of the goals of Saudi Vision 2030.

The Cabinet also considered the subjects mentioned in its agenda, including matters in which the Shoura Council participated in their study, and considered the results of the Economic and Development Affairs Council, the Political Affairs Council and security, the General Committee of the Council of Ministers and the Office of Experts of the Council of Ministers.

The Cabinet also authorized the Minister of Energy to discuss with the Omani side regarding a draft cooperation agreement between the Saudi government and the Omani government in the field of energy, to sign it and to return the final signed copy to proceed with formal procedures.

He authorized the Chairman of the Saudi Fund for Development (SFD) to discuss with the British side regarding a draft Memorandum of Understanding between the SFD and the UK Department of State and International Development.

He approved the formation of a committee bearing the name (the Manufacturing Committee for Vaccines and Lifesaving Medicines) under the chairmanship of the Minister of Industry and Mineral Resources, where the committee will be the specialized institution in Saudi Arabia regarding the regulation and manufacture of life-saving drugs.

The Council of Ministers approved the delegation of the tasks of establishment, operation and maintenance of water treatment plants of dams and groundwater, whose daily capacities exceed 5,000 cubic meters to the Saline Water Conversion Corporation .

The Cabinet also considered several matters mentioned on its agenda, including the annual reports of the Ministry of Hajj and Umrah, the Saudi Grain Organization, the Disability Care Authority, the National Center for Social Studies, National Center for Online Learning and Nuclear. and the Radiological Regulatory Commission, and took the necessary procedures regarding these matters. — SPA

Why Slash Hated the Los Angeles Music Scene in the ’80s