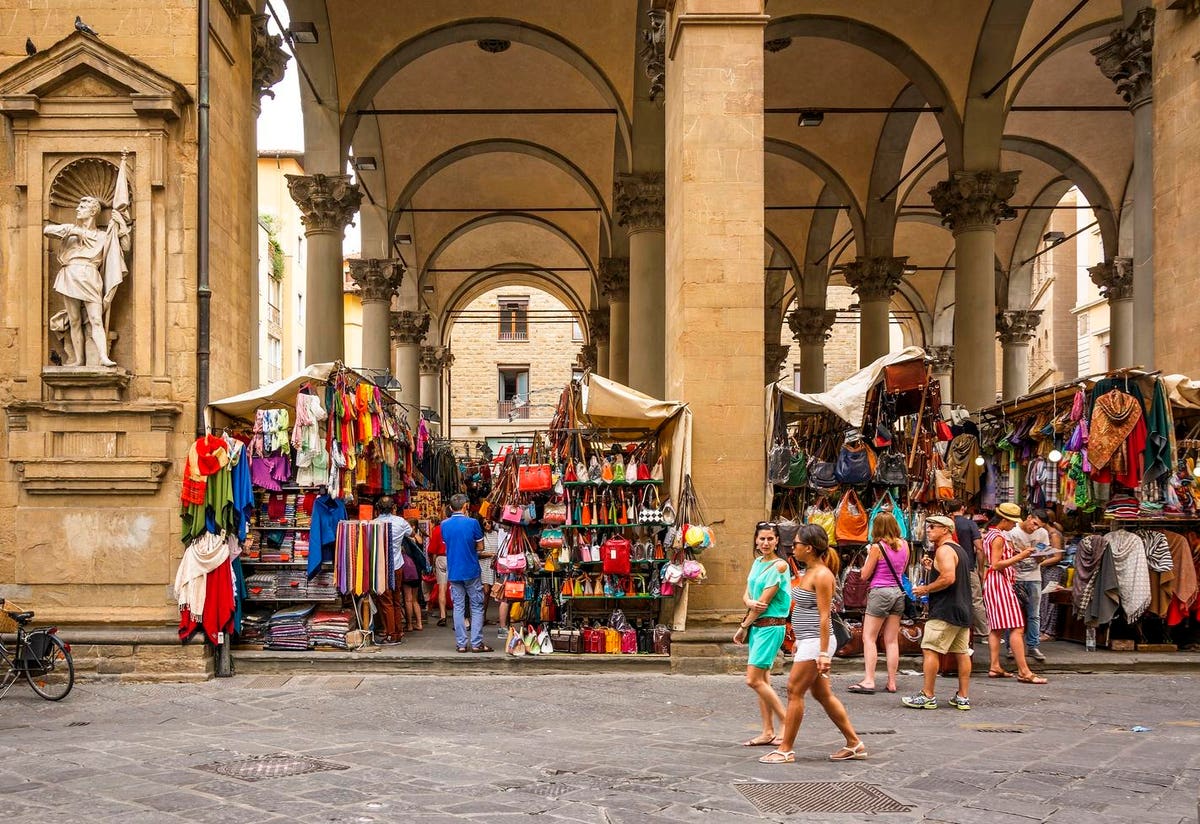 The Mercato del Porcellino in Florence owes its name to the large bronze boar that basks under the arcades of the Renaissance loggia. Normally, it is the tourists who rub the pig’s now shiny nose for good luck. But these months, with a shortage of customers, it’s the leather dealers whose stalls are just behind in the open market who need the animal’s fortune.

Carlo Lippi is a third generation leatherworker. His stand was first set up in the Mercato del Porcellino by his grandfather, just after the war. But leather, one of Florence’s most famous products, has a much longer history. Thanks to the city’s location along the Arno River, there was an abundant supply of water to facilitate the tanning process needed to produce leather. A guild of leather workers was established in 1282 and Florence became famous throughout Europe for its high quality products. Even today, visitors flock to the town to shop for unique clothes and bags at the independent leather shops and open-air market.

But on a February weekday in the midst of the pandemic, the leather market is almost completely devoid of customers. Lippi passes the time chatting with another longtime salesman, Oscar Cioppi, who opened his stand here in 1989. “It’s been a really terrible two years for us,” Cioppi says. Here, leather goods are bought almost exclusively by tourists, foreigners and Italians. With closed borders and strong travel restrictions, the main clientele of leather sellers has been almost completely absent since the start of 2020.

Last winter, Cioppi, Lippi and another vendor were often the only three stalls open in the market, sometimes even alternately. Even now, several sellers are missing. “Some sellers are staying home or have found other temporary jobs,” Lippi says, “because we still have to pay fees and taxes to sell here even though we don’t make any sales.” He adds that in winter, earning 100 euros would be a good day.

Crafts across the city suffered similarly. Just down the road, the famous Ponte Vecchio is home to tiny jewelry stores that hang outside the bridge. They too have seen their clientele decimated. Some stores still remain closed on weekdays, their gleaming gold wares hidden by solid wood panels with signature fleur-de-lis hinges. “It was brutal for the historic center,” says Cioppi. Even businesses not dependent on tourists have suffered, he notes, such as pharmacies and small food outlets. Further out of town, Cioppi says businesses are doing better because they can also rely on the custom of local residents.

Like other businesses, Lippi and Cioppi have received emergency government aid, but they say the funds are coming in so slowly that they have to dip into their savings to tide them over anyway.

Some tourists are now returning to the city, but that’s a paltry number compared to before the pandemic. As Cioppi notes, some of the most obvious absences are tour groups and cruise lines. While neither supplier is a proponent of mass tourism or oversized cruise ships, the disruption of these many arriving visitors is a significant loss for the businesses.

Finally, a customer arrives and starts eyeing Cioppi’s booth. He rushes to try to make his first sale of the day. Moments later, a lone tour group passes by, a few heads turning curiously, noses sniffing the smell of leather. Lippi’s eyes follow them as they round the corner. “Florence will need a few years to recover,” he says, “but she will, I’m sure.”