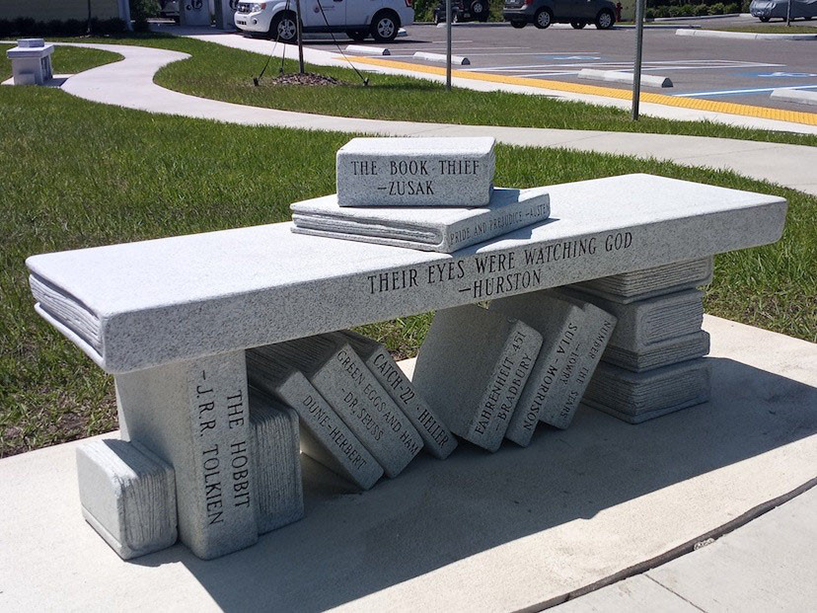 At the Newport Beach City Council meeting on Tuesday, February 8, the City Council unanimously approved the selection of ten works of art for Phase VII of the Civic Center Park Sculpture Exhibit.

According to information provided by Arts Orange County, the entity that has been contracted by the City of Newport Beach to administer the program since its inception in 2013, the City Arts Commission reviewed applications for eligibility and then Newport residents Beach were asked to register their top three preferences in a month-long online survey.

The top ten ranked works (and four alternates) were then recommended by the city’s Arts Commission for approval by the city council.

The works will be exhibited for two years at various locations in the park, immediately following the removal of the ten Phase V works.

The selected works are “A Novel Idea” by Craig Gray; “Eve” by Joe Forrest Sackett; “Do you have any juice?” by Stephen Landis; “Pathway Parabola” by Greg Mueller; “Prey” by Mr. and Mrs. Ferguson; “David” by Miggy Buck; “Where Have All the Birds Gone” by Marguerite Elliot; “The Archeology of the Everyday” by Tyler Burton; “Plumera Sculptura aka The Feather” by Kirk Seese; “Cross section” by Tim DeShong.

Arts Orange County President Richard Stein addressed the city council at the meeting and reminded them that “It’s not our exhibit, it’s your exhibit. These are not our picks, these are the picks of the people of Newport Beach.

He presented to the board the 10 approved artworks that were ranked highest, plus four alternates.

Council member Diane Dixon said the sculpture exhibit was a great program and thanked the Arts Foundation for undertaking the project and raising funds for Sculpture in the Park. Council member Joy Brenner suggested that in future the voting procedure could be changed to have the public vote for their 10 favorite works of art instead of the current three pieces.

Board member Brad Avery praised the arts commission and noted that “a lot of effort goes into a rotating exhibit like this. This adds a certain spice to the site of our town hall.

According to a staff report prepared by Tim Hetherton, director of Newport Beach Public Library Services, the acquisition program the city’s Arts Commission developed for the exhibit created a pattern in which exhibits are loaned for a period (or phase) of two years. The sculptors of the works chosen for the exhibition receive a small payment for lending their work to the City. The City is responsible for installing the artwork, while the sculptors are responsible for maintaining and repairing their work.

Admission is free and the exhibit continues to be enjoyed by residents and guests of all ages and sensibilities. As noted by Hetherton, the exhibit has become a “museum without walls” that offers the temporary exhibition of public art in a unique naturalistic setting. Additionally, the City is able to exhibit a well-balanced representation of public art, with artistic merit, sustainability, practicality and site responsiveness as criteria for selecting works. The rotating nature of the exhibit ensures that residents and guests are exposed to a variety of work. Borrowing pieces remains a cost-effective alternative to owning and maintaining permanent public works of art.

Since 2014, the city’s Arts Commission has presented six phases of the sculpture exhibition, with the completion of phase VI in June 2021. On September 28, 2021, the city council approved a professional services agreement with Arts Orange County for $119,000 for Phase VII of the Civic Center Park Sculpture Exhibit. This amount includes project coordination and management costs, as well as installation and deinstallation costs.

Hetherton noted that, as in previous phases, the city’s Arts Commission used private funds to increase the total cost of Phase VII. The Newport Beach Arts Foundation, the city’s designated support group for the City Arts Commission, donated $20,000 for the project. These donated funds will be used to pay the fees of the artists.

For Phase VII, the city’s Arts Commission handed over the selection process to the public. Through an online poll, Newport Beach residents voted for their favorite sculptures and selected the pieces to be included in Phase VII. The 10 sculptures and four alternatives were entirely selected by the public.

Using these criteria, the city’s Arts Commission approved 25 pieces submitted for the

investigation. The online public survey was launched on December 10, 2021 and closed on January 10, 2022. According to Hetherton, 390 entries were successfully registered, registering a total of 1,084 votes. After potential double votes were eliminated, there was a validated total of 346 voters, casting 985 votes.