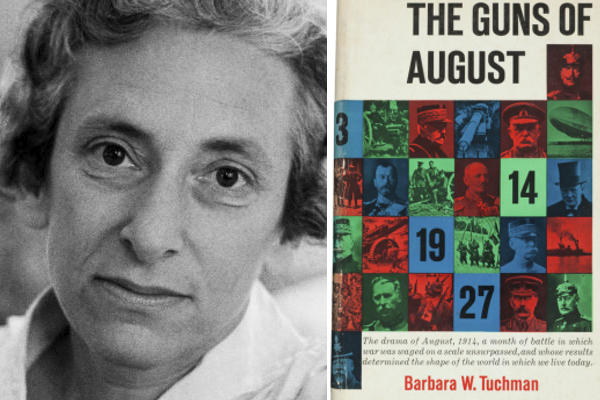 Popular stories have influenced world leaders, sometimes for the better

Sometimes presidents are influenced by the history books. Bill Clinton consulted Ghosts of the Balkans: A Journey Through History by Robert Kaplan when it came to conflicts in southeastern Europe. In 2008, Barack Obama consulted the cabinet of Jonathan Alter The Defining Moment: FDR’s Hundred Days and the triumph of hope for ideas on launching a strong presidency. Joe Biden liked America’s Soul: The Battle for Our Best Angels so much so that it made its author, Jon Meacham, a key adviser. No historian, however, has had a more significant impact on the thoughts and actions of an American president than Barbara Tuchman. President John F. Kennedy learned important lessons from one of his books as he sought a peaceful resolution to the Cuban Missile Crisis.

Who was this woman whose writings on history may have influenced the course of history in a significative way ?

Barbara Tuchman became one of the most widely read historians of the 1960s and 1970s. Her parents were prominent financiers, civil servants and philanthropists. Tuchman was related to Henry Morgenthau, Sr., Woodrow Wilson’s ambassador to the Ottoman Empire and Henry Morgenthau, Jr., Franklin D. Roosevelt’s Secretary of the Treasury. Barbara Tuchman traveled and lived in Europe and Asia during her formative years. She published a book on British policy towards Spain in 1938, but parental responsibilities prevented her from writing book-length historical interpretations until 1956, when she published bible and sword. Several bestsellers followed.

Some academic historians have criticized Tuchman’s “popular” stories for their amateurishness and superficiality. She defended her approach, pointing out that many researchers fail to tell a good story. Tuchman asserted “you must be disengage and you have to be interesting” when writing for the public. A historian must always ask himself: “Will the reader turn the page?”

In one of his most influential books, The March of Madness: From Troy to Vietnam (1984), Barbara Tuchman has delivered strongly opinionated judgments about the foolish decisions of powerful figures in history. She observed, for example, that the aggressive actions of Renaissance popes brought about the Protestant Reformation and that King George III’s inept handling of settler protests brought about the American Revolution. The longest chapter of his book deals with the “madness” of the American military intervention in Vietnam.

Tuchman often referred to the “wooden head” of leaders – their tendency to make decisions guided by preconceived notions. Many leaders she studied ignored or rejected recommendations to consider different courses of action. Tuchman did not view historical outcomes as inevitable. She believed that many situations could have turned out differently — and for the better — if leaders seriously considered their options and considered the long-term consequences of their decisions.

This idea was a main theme in The guns of august, published in 1962, which made a deep impression on President John F. Kennedy. Tuchman’s book dealt with the first month of World War I, when European nations plunged into war. The fighting did not end quickly, as national leaders expected. The conflict severely damaged European civilization and wreaked havoc on other regions. Twenty million people died. There were also long-term implications. During the war, a communist revolution succeeded in Russia. Later, the Nazis became dominant in Germany. World War II and a long Cold War ensued. Many problems of the 20th century could be traced to the misjudgments of the rulers in August 1914.

President John F. Kennedy read The guns of august shortly before the start of the Cuban Missile Crisis, and he often referred to the book during the crisis. When American reconnaissance photos showed the Soviets erecting missile bases in Cuba, Kennedy called secret meetings to discuss responses. General Curtis LeMay and other military officers wanted to bomb the missile sites. They believed that a massive display of American power would force the Soviets to capitulate. President Kennedy was not convinced. Recalling lessons from Tuchman’s book, he acknowledged that generals frequently call strikes during international crises. Once the fight begins, the political leaders are under enormous pressure to continue the clash of arms until victory is achieved.

During tense discussions in October 1962, President Kennedy recalled a conversation recorded in Tuchman’s book in which a former German chancellor expressed bewilderment at the outbreak of war in August 1914. come ? He asked. His successor replied, “Ah, if only we knew.” Kennedy, thinking of the missile crisis, exclaimed: “If ever this planet is ravaged by nuclear war – if the survivors of this destruction can then endure fire, poison, chaos and catastrophe – I do not want not have one of these survivors ask another, ‘How did this all happen’ and receive the incredible response, ‘Ah, if only we knew. which will allow anyone to write a comparable book about this era”. [called] The October Missiles. If anyone is here to write after this, they will understand that we have made every effort to find peace and every effort to give our adversary breathing room.

President Kennedy wanted others to benefit from the perspective he gained from The guns of august. He asked the best assistants to read the book. Kennedy wanted to send a copy to every naval officer, but he acknowledged they probably wouldn’t read it.

Rather than plunge into war, Kennedy and his administration officials organized a “quarantine” of the waters around Cuba. Eventually, they achieved a peaceful resolution to the crisis. As many historians have since noted, the world was on the brink of nuclear catastrophe in October 1962. Fortunately, leaders in Washington and Moscow walked away from it.

Barbara Tuchman was not passionate about war, and this attitude was evident in much of her writing. Reviewing the record of humanity’s many failures to resolve conflict peacefully, she reminded readers that workable alternatives to war are often available. Unfortunately, leaders sometimes fail to seriously explore these opportunities.

In the 1980s, journalist Bill Moyers conducted an interview with Tuchman. Moyers suggested that the American people had finally come to recognize the futility of many armed conflicts. “I think in our collective wisdom, the American people have learned from the Vietnam experience,” Moyers observed. They learned “not to let another president drag us into a war unless he can present overwhelming evidence that our national security was clearly at stake.” Then Moyers asked, “Don’t you find that encouraging?”

Tuchman expressed hope that the Americans had learned the lessons of their country’s experience in Vietnam, but she stressed that the leaders “persist in the madness because they do not want to give up their position, their power, and they are afraid that if they give up leave and if they say “we made a mistake or we are doing the wrong thing”, they will be expelled or they will lose their status.

Years after Barbara Tuchman’s death in 1989, those words seemed prophetic. In 2003, President George W. Bush and senior officials in his administration created a justification for war based on flimsy evidence. When weapons of mass destruction didn’t show up in Iraq and there was no convincing evidence of Saddam Hussein’s connection to the 9/11 attacks, they refused to say, “we were wrong.” If Tuchman had been alive at the time, she would likely cite the invasion of Iraq as another example of “madness” and remind Americans that President John F. Kennedy, an avid history reader, posed difficult questions and made informed decisions when dealing with an international crisis.