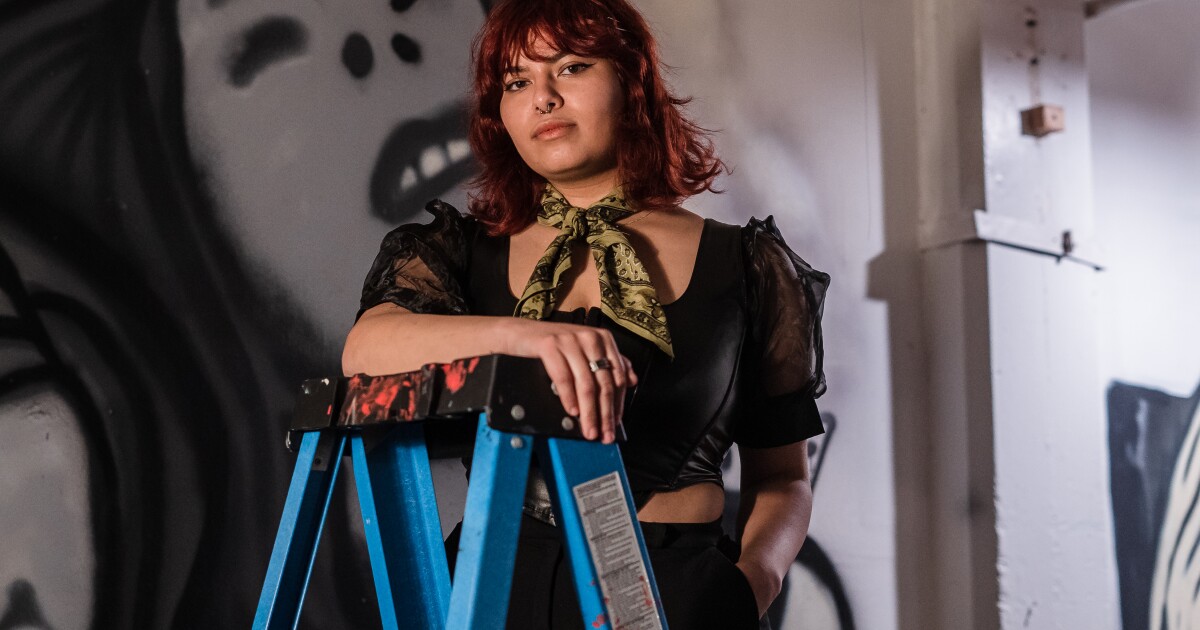 Ever since artists produced art, religious iconography has been a mainstay. From prehistoric cave paintings in Lascaux, France, to contemporary works by artists such as Aleksandar Todorovic and Nadia Waheed, the practice of art as a means of representing spiritual devotion is as old as the practice itself.

In front of one of her paintings, local artist Vanessa Rishel, whose pronouns are she/they, does her best to explain what inspired her to produce it. The painting in question, “Our actions are orchestrated from above (our intertwined strings)”, hangs in their studio at Bread & Salt, where they have just completed a months-long residency. In black and white oils and acrylics, the painting depicts crude puppets of various religious icons, including an angel, a Mexican-inspired figure. calaque and, in the background, what appears to be Joseph talking to a pregnant Mary.

“I think the root of all my work is trying to find a sense of reality, so there’s a lot of iconography,” says Rishel, who says much of their work over the past two years had a lot to do with living in Church Lofts apartments downtown. “It was a Baptist church in the early 1900s so being quarantined there was a really interesting experience.”

As with other pieces from Rishel’s workshop, “Our Actions Are Orchestrated From Above” is surrounded by a frenzy of notes and scribbles written on crumpled pieces of paper and receipts. Some are concept blueprints of the work itself, but some of the notes are expansive existential reflections on life itself.

“A flood triggered by an angry god.”

Rishel admits these notes can sound “pretty neurotic”, but when seen with the piece, they offer a more vulnerable glimpse into the mind of one of San Diego’s most promising young artists.

“It was weird for me to be non-religious and basically trapped in a church, thinking about these things,” Rishel says, contemplating their time living at the Church Lofts. “I am fascinated by puppets. This idea that if there is a higher power, then we are all puppets. So I wanted to portray that – the idea of ​​fate and destiny.

Influenced as much by Renaissance masters as by pop-surrealism and manga, Rishel skilfully explores those ineffable gray areas between fatalism and free will, adoration and reverence. This is the case of “Rogación de Cabeza (Surrender and Santería)”, an oil that incorporates the classic technique of gold leaf perfected by Renaissance painters. She describes the piece as “a tribute to an experience of surrendered control, healing, acceptance and love”, but could also be seen as a reflection of her family roots and upbringing in San Ysidro.

“The root of it all is the search for identity, which is perhaps why there are a lot of these religious elements,” Rishel says. “I’m not particularly religious, but my family loves Santería, so I do rituals with them. Well, they do a lot of rituals on me. I think it’s really beautiful. Part Catholicism and part African hoodoo. It’s a very intense religion, but it comes up often in my work.

Rishel had wanted to be an artist since they were 6 when they won a drawing competition in elementary school. Growing up in San Ysidro in a working-class, yet creative family, Rishel credits her father for her artistic talents, but says it was her mother who provided me with “a safe space” and “pursued whatever interested me. “. And while Rishel doesn’t identify as an introvert, they’re quick to point out that much of what they know is self-taught and influenced mostly by deep internet dives.

“I think originally I never really intended to be part of art shows,” says Rishel. “I think I just honestly wanted to be one of those internet artists who just put their work up there and are still home alone.”

Once out of high school, Rishel briefly took art classes at Southwestern College, and while they were drawn to the graffiti artists around San Ysidro, they are reluctant to call them influences or inspirations. Rather, Rishel says they were more drawn to finding related creatives and artists online.

“I would find lots of artist blogs and try to emulate their styles,” Rishel says. “I just thought these blogs were weird and random, but it wasn’t until college that I found a lot of other people like me.”

In that way, Rishel is emblematic of what it could mean to be a Gen Z artist. While creatives of the past had no choice but to search the pockets of other creatives or go to school to learn to paint, Rishel’s generation can first choose their tastes on the Internet and, what’s more, learn how to do it via the many tutorials on social networks and YouTube.

That’s not to say Rishel’s generation is better off or doesn’t have to work as hard. On the contrary, it is more revealing of an economic reality: that if they have the heart of an artist, they will succeed. And given that a whole new generation of young artists have spent two years either in isolation or remote learning, it’s not so hard to assume that this could be a new normal. A sort of distillation of artistic self-didacticism via the Internet. The difference with Rishel is that they were able to take advantage of what they learned on the Internet and, in addition to persevering and trying to perfect their techniques, they made a name for themselves despite their non-compliance institutional artistic standards. Plus, they use their art and platforms to support causes they care about.

“I just think art and helping people go together,” says Rishel, who has created prints of their paintings to help raise money for causes like Border Angels and Otay Mesa Detention Resistance. “I love the idea of ​​’what can I do to give back to the things I care about’, and that’s my only talent.”

Although they are proud of their accomplishments so far, Rishel plans to return to school soon, this time to Mesa College. With their first residency at Bread & Salt completed, they will have their first solo gallery show this summer at the Hill Street Country Club in Oceanside. They were also recently asked by Casa Familiar, a local non-profit organization, to produce a mural in San Ysidro.

“I used to walk around the neighborhood and there were murals, but they sat untouched for years and were never updated,” says Rishel, who recently returned to the neighborhood. where she grew up. “But it’s interesting to see this new generation of artists throwing their work there. I’m so excited to work in my neighborhood that I grew up in. The same streets and alleys that I walked around holding my boyfriend’s hand or smoking shitty weed with my friends. Yeah, I’ve come full circle.

Fun fact: In addition to the spiritual elements of their work, Rishel says Japanese anime and manga comics have had a huge influence on his work, citing Yoshitomo Nara and Inio Asano as two of his favorite artists. “I’m moving away from realism and wanting to play with cartoon characters more,” says Rishel.

Combs is a freelance writer.

Popular stories have influenced world leaders, sometimes for the better