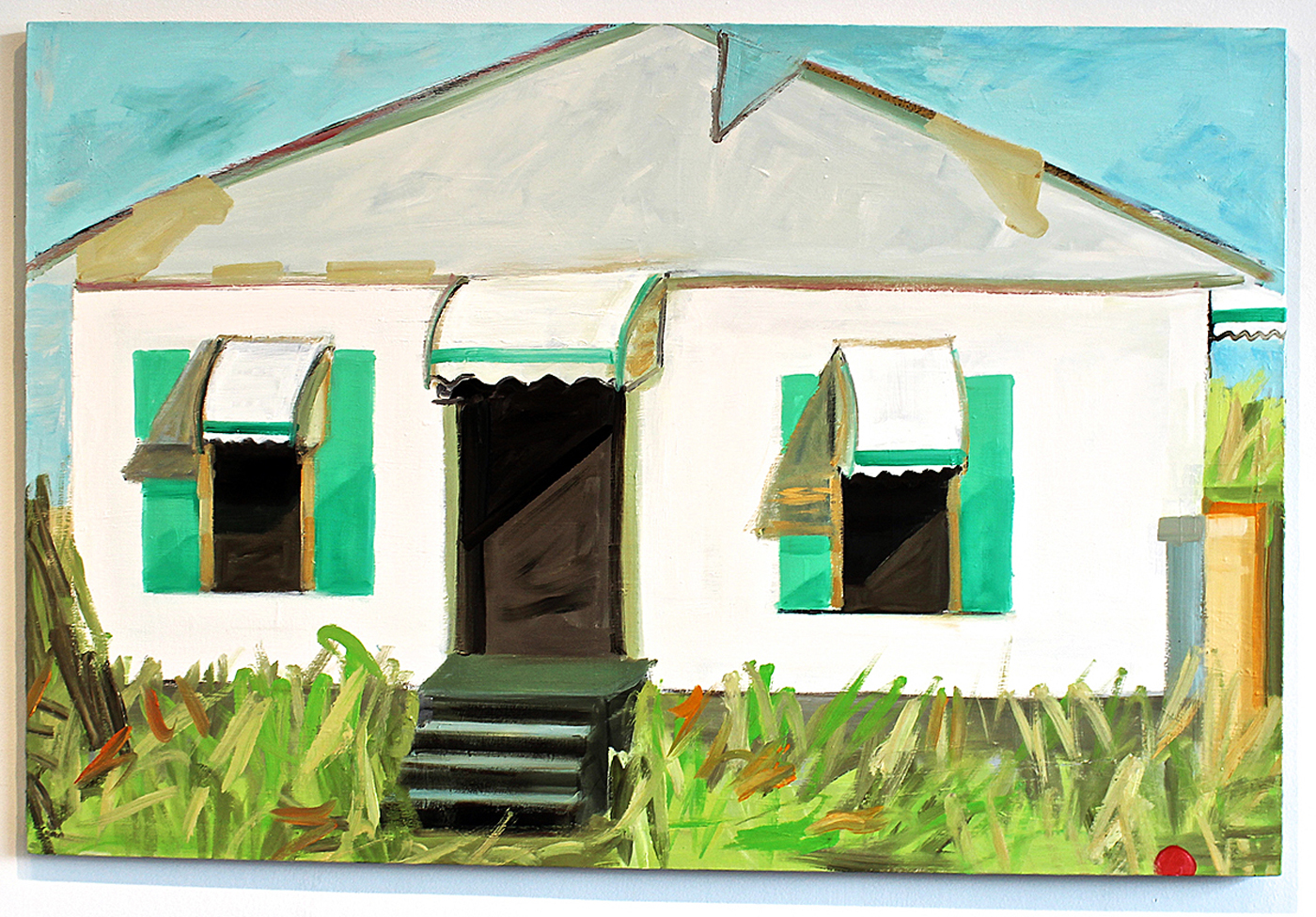 Salvation by Rescue of the Cass Corridor Movement

“It never occurred to me that we would ever have an audience,” said the painter Nancy Mitchnickin a curator’s statement that accompanied a series of Three exhibitions presented at the Simone DeSousa Gallery in 2017. Mitchnick refers to the Cass Corridor art movement, which took place roughly between 1960 and 1980 in the heart of Detroit, and is presented as the only major contemporary art movement to be born in the city. The movement takes its name from Cass Avenue, a thoroughfare in the rapidly developing commercial strip between Wayne State University and the Masonic Temple – the “Cass Corridor” or “Midtown”, as it was painstakingly renamed during the last decade.

Mitchnick was one of many artists from Cass Corridor who moved to New York temporarily or permanently to pursue their careers on a more public stage – a cohort that included Al love, Robert Sestokand Brenda Goodman. “We were just a bunch of young, intense, talented almost artists trying to figure it out,” she recalls, painting a picture of mid-1960s abandonment. “I was always an outsider, at inside, sort of,” she added in her 2017 statement.

The notion of an “under-represented” art scene, like the Cass Corridor, obscures the fact that within it are even more under-recognized participants, especially from the outside. Mitchnick recalls characters like Greggi (Greg) Murphy, an influential and difficult performer and a stage figure “no one remembers”, but without whom the important Willis Gallery would never have formed, and who also made many encounters between artists and Sam Wagstaff during his brief but highly influential tenure as Curator of Contemporary Art at the Detroit Institute of Arts (1968-1971). She also praises the late artist Michael Luchswho was secluded for 30 years. Cass Corridor: connection time, the exhibition series curated by Mitchnick, was a deeply informed dive into the Cass Corridor scene, but it was never intended to be canonical; instead, he took it as conceit that he was presenting an individual perspective based on Mitchnick’s lived experience.

Perhaps the most official take on the who’s who of the Cass Corridor movement is found in the Detroit Institute of Arts’ keystone exhibit of 1980, Clear the Traffic Jam: Detroit’s Cass Corridor, 1963-1977, co-curated by curators Mary Jane Jacob and Jay Belloli and featuring 22 artists. In the catalog, Jacob traced the evolution of the movement through the “Wagstaff years” of the DIA and the formative era of the Willis Gallery, from 1971 to 1977. Notable names that have been enshrined in this exhibition and catalog are Gordon Newton, Nancy PletosDouglas James and the poet Ken Mikolowski.

Few things can be said that apply to all artists connected to the Cass Corridor scene. Like all of Detroit, the community was rocked by the polarizing rebellion of 1967 (or “riots” as many Detroit residents still refer to the period of unrest), and although much of the art can be described as apolitical, the associated literary scene was extremely radical. . He produced both the alternative pressfounded by Ken Mikolowski and his wife, artist Ann Mikolowskiand the Fifth domain, the region’s first alternative weekly-style newspaper, founded in 1965 and considered one of the oldest English-language anarchist publications in North America. Although writers, poets and musicians are not often included in the Cass Corridor canon (the Mikolowskis are an exception), their influence on the scene was integral and they bore much of the weight of communicating the political cracks. and social issues that emerged in the 1960s and 1970s in and around Detroit.

Visual artists were best known for their rejection of the mainstream convention of abstraction. Working with what they had, which was a city full of abandoned industrial parks, Cass Corridor artists scrapped and repurposed metal, wire, fences, broken ceramics, industrial paint and foam, and whatever else they could get their hands on – trying, perhaps, to find salvation for their city through a literal process of salvage and reuse. The results were grainy and sharp but often still figurative, as with Jim Chatelain”black coat(1989), an eponymous construction from fabric and encaustic. by Michael Luchs”Rabbit” (1974), composed of wires, carpets, cables and wood is just one of many iterations of his muse Leporidaen, which he would continue to obsessively sculpt and paint through his last year of work of 2020.

Two murals by Robert Sestok commissioned in 1973 by James Duffy for his Pipe Storage Warehouse mimic the shapes of pipes and repetitive circles of materials in space, as does his 2017 mural, commissioned by Jack White for the Detroit location of the artist’s Third Man Records. franchise, echoes the materials and workings of the record pressing factory it adorns. Nancy Mitchnick’s paintings are gestural and evocative, but they are also generally figurative, and in recent years have moved towards streetscapes that treat dilapidated houses as still life subjects. The trend toward more literal rather than abstract expressions embodies a divide between Midwestern and Coastal cultures that remains to this day. The dominant aesthetic of the Cass Corridor movement, writ large, is gritty, opportunistic in found materials, and counterfeit, resulting in works of art that capture and genuinely reflect the Detroit of its time.

The Cass Corridor movement is marked by intertwined and divergent histories. Different threads can follow the hometown hero and the legendary sculptor Charles McGeerecently deceased, or painter Allie McGheewho has been a mainstay of the Detroit art scene for more than five decades, or multimedia artist Lester Johnson. Although much of this work retains figurative elements, there is also a richer focus on color, pattern, and designs that explore the roots of black citizens in Detroit, the American South, and more. far in Africa.

Zubel Kachadoorian, a painter and professor at Wayne State University born in 1924, who slightly predated the movement, also had ties to it. During my lamentably truncated research, I came down a bradley jones rabbit hole that led to Catherine DeMay, artist and managing director of Detroit Focus Gallery; Carl Kamulski, co-director of the Michigan Gallery; and Mary Preston, owner of the Feigenson/Preston Gallery in Birmingham, a suburb of Detroit. Susanne Hilberry was a particularly influential gallerist, who served as Sam Wagstaff’s assistant in 1972, and later championed a second and third wave of Detroit artists in her gallery, which she moved from the suburbs to the edge of 8 Mile Rd., the dividing line between the city and the suburbs. Yet one suspects that one of these other gallerists would have their own story to tell about the Cass Corridor. For example, gallery owner Paul Kotula is a strong supporter of Jim Chatelain. Many members of Detroit’s arts community speak Ellen Phelan‘s name with reverence and respect.

The best formal reference of this period is the Wayne State University Collection. The DIA has collections in its collection, but the museum has rarely exhibited or considered them as the legacy of this movement, despite by Sam Wagstaff influence on the art scene. But whether or not the Cass Corridor scene gains greater outside recognition, it is deeply self-evident — and whether outsiders choose to notice or validate Detroit’s cultural output has never seemed like a major concern. of its artists, past or present. Any witness to the scene can offer their own meandering story, their own litany of names and places.

Even those like me, who simply follow breadcrumbs through the archives or have conversations with Nancy Mitchnick or Bob Sestok, will come away with their own unique impression of the Cass Corridor and its multiplicity of meanings. The scene is a microcosmic example of how everything that happens in Detroit is part of a tapestry of nuanced and often conflicting stories, sensibilities and perspectives. I don’t know whether it’s better to be, as Mitchnick called himself, an “outsider on the inside” or — as most of us who live in this town seem to prefer — an insider here on the outside. .

Editor’s Note: This article is part of a special edition of Hyperallergic dedicated to under-recognized art histories.