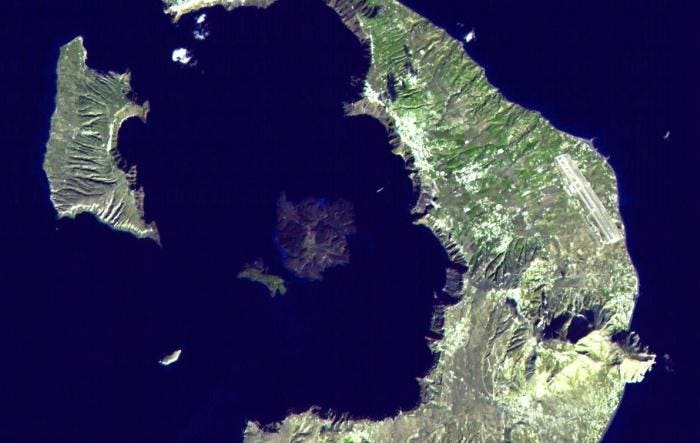 The skeletal remains of a victim of the prehistoric Thera eruption have been found on a shore in Cesme Bay, western Turkey. Archaeological evidence suggests the young man was killed when a series of tsunamis triggered by the eruption and collapse of the Thera volcano on the modern island of Santorini in the southern Aegean Sea, according to Turkish and Israeli researchers. , flooded the coastal areas around the western Mediterranean Sea.

Santorini is basically what’s left after a massive volcanic explosion that destroyed the first settlements on what was once a single island and created the current caldera surrounded by a ring of small islands. Such a flooded caldera is formed when a volcano empties its magma chamber during a violent eruption and the overlying mountain collapses.

The effects on people and society of the supereruption that created Santorini 3,600 years ago, possibly one of the most violent volcanic eruptions in European history, are still hotly debated today.

In 1930, the Greek archaeologist Spyridon Marinatos discovered the remains of the ancient port city of Santorini, named Akrotiri, buried under volcanic deposits. Archaeological excavations have revealed that Akrotiri was an import outpost of Minoan culture. As in Pompeii, volcanic deposits have preserved the city, however, unlike Pompeii, no body has been found.

Perhaps the seismic activity preceding the eruption scared people never to return. Carbon dating of burnt wood recovered from the ruins gives a date for the eruption of 1600-1627 BCE. The eruption was so violent that it generated a series of tsunami waves, likely ending Minoan civilization on the neighboring island of Crete and inundating shores hundreds of miles away in Egypt and Turkey. Some authors have suggested that the widespread destruction caused by the volcano inspired the myth of Atlantis.

The skeleton was found buried under a mixture of volcanic ash, sand, seashells and rubble, and the location of the body suggests the man was pushed against a wall by the force of the water before drowning . Scientists also found the bones of a dog lying nearby under collapsed stones. Radiocarbon dating of the remains gives an age of 1612 BCE, coinciding with the Thera eruption.

By studying the layers of ash found at the excavation site, the researchers conclude that Thera erupted for about two weeks, generating at least four tsunamis, with waves 4 to 5 meters high. The tsunamis were separated by hours or even days, perhaps allowing for a few rescue attempts, according to the authors. They found evidence that people tried to clear the rubble and dig in the tsunami deposits, possibly in an attempt to locate the survivors.

The research is published in the journal Proceedings of the National Academy of Sciences.