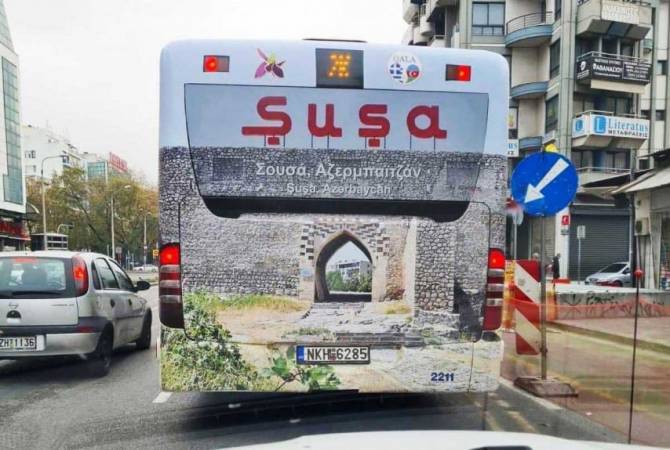 Greece on Wednesday ordered the removal of an Azerbaijani advertisement with the words “Shushi is Azerbaijan” from public transport in the Greek city of Thessaloniki.

It was withdrawn thanks to the efforts of the Embassy of Armenia, community structures, the Greek-Armenian Chamber of Commerce and the Armenian National Committee of Thessaloniki, Armenian Ambassador to Greece Tigran Mkrtchyan said. Armenpress.

â€œWe contacted and worked with the authorities in Thessaloniki, including the executive branch, and explained to them that the ads should be removed immediately, as they are political and provocative in nature. Within hours, the Greek authorities reported that the advertisement had been removed from the bus, â€the ambassador said.

He stressed that such actions from Azerbaijan can be expected not only in Greece, where there is a small Azerbaijani community, but also in other countries.

“With such provocative measures, Azerbaijan is simply trying to present and perpetuate the results of the use of force as a reality, while we know for sure that the question of the status of Nagorno-Karabakh remains open, Shushi and Hadrut are currently busy. With such measures, Azerbaijan is trying to give the impression that the problem is closed, â€Mkrtchyan added.

â€œI consider this step as a provocation, especially in a friendly country like Greece, whose authorities have more than once expressed their solidarity with Armenia’s positions. With such a provocative measure, they are trying to put some tension in Armenian-Greek relations, which, of course, will be a failure, â€said the Armenian ambassador to Greece. Armenpress.

Greece-Armenia relations through the centuries

The links between Armenian culture and Hellenism date back at least to the 6th century BC.

According to twentieth-century linguists, the Armenian and Greek languages â€‹â€‹share a common ancestry, with the two peoples also having similar traditions.

The Armenians contributed greatly as carriers of the Greek language, civilization and Eastern Orthodoxy since they were an important part of the Byzantine Empire.

In the 20th century, the Armenian people and Hellenism both faced violent persecution from the Turkish state, culminating in the destruction in 1922 of the Greek and Armenian population of Smyrna.

Greece is one of the countries which officially recognizes the genocide of the Armenians by the Ottomans. It also grants development aid and humanitarian aid to Armenia and has supported the country’s rapprochement with European institutions.

Under the agreement, Azerbaijan will retain the areas of Nagorno-Karabakh that it took during the conflict. Armenia has also agreed to withdraw from several other adjacent areas in the coming weeks.

A few months later, President Biden acknowledged the genocide of the Armenian people committed by Turkey in 1915. This ended a coherent policy of non-recognition that had long guided Biden’s predecessors.

“Every year on this day, we remember the lives of all those who died in the Armenian genocide of the Ottoman era and we recommit ourselves to preventing such an atrocity from happening again,” the president said. American.

Related: The Armenian Contribution to Hellenism and Orthodoxy

Artprice and Cision extend their alliance to 119 countries to become the world’s leading press agency dedicated to the Art Market, NFTs and Metaverse