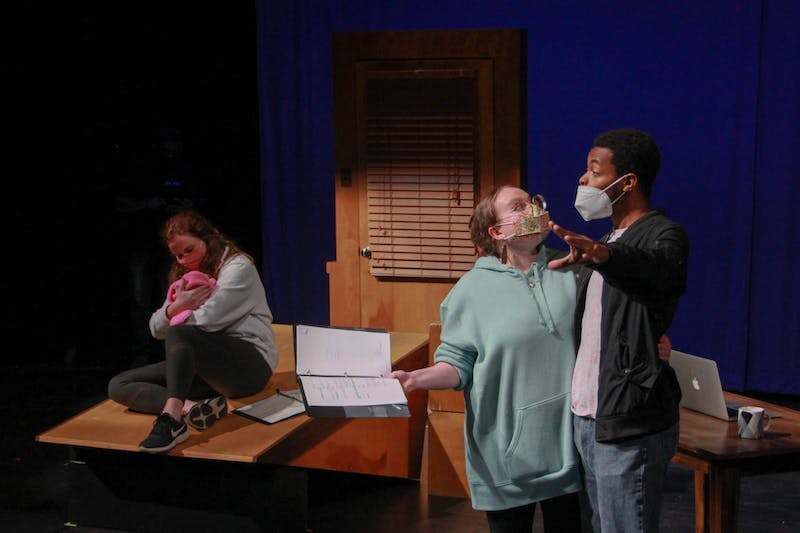 From comedy to drama, the 11th Annual Short Film Festival has a show for all audiences. After a year of preparation, playwrights, actors and directors are ready for the stage.

LSS offers performances of plays written by UNC students with a minor in writing for screen and stage. It will be live at Studio 6 at the Swain Hall Black Box Theater on Fridays at 7:30 p.m. and on Saturdays at 3 p.m. and 7:30 p.m.

The minor, within the communications department, is a two-year interdisciplinary program, according to the department’s website. Students wrote their plays in the Introduction to Screen and Stage Writing 2020 course, according to Dana Coen, a professor of the practice.

Coen, the artistic director and producer of LSS, as well as the director of minor writing for screen and stage, said he chooses eight pieces from the introductory class to develop further.

The idea for the festival originated in 2010, when Coen was reading the first set of short pieces from a screen and stage writing class at UNC.

â€œI was struck by the ambition, the depth of vision and the singular voices of these undergraduates,â€ he said. â€œThe experience encouraged me to imagine a theater festival where writing students could participate in a process seldom experienced at their level.

Manager Naveed Moeed, editor for Chatham Life & Style, is a new member of the LSS team. He said the Black Box Theater at Swain Hall has been upgraded over the past few years with the latest technology and lighting.

“Usually the people who have been involved in setting this up each year have come back year after year to do it over and over again, and that says a lot about the level of professionalism and care with which it has been organized each year. “, Moeed mentioned. “I feel privileged to have been invited to the crew and also amazed at the space we will be using.”

Even with his critic cap on, Moeed said some of the works on display were exceptional and he wouldn’t be surprised if there was a very bright future for a number of the minor Writing for Screen and Stage graduates.

â€œThis particular event is quite unique because it brings in quite a lot of collaboration from the outside, so it’s not a fully student affair or a fully professional affair, but a kind of collaboration between the city and the dress,â€ said Moeed.

A UNC graduate, William Booth has been doing the festival for a few years, and is returning this year as an actor. When he was a senior he wrote a play which was performed at the festival. Since graduation he has performed in several.

â€œI’ve watched the festival grow and evolve over the past few years, but what’s special to me is that a lot of things have stayed the same,â€ said Booth. â€œI’ve made a lot of friends that I see year after year because of the festival. It’s great to come back to Chapel Hill for the festival; it’s like coming home in a way.

In a week, the actors read the plays for the first time and perform them for the last time. Coen said that the ability of actors to be well prepared in a short period of time is attributed to the thoughtful writing of playwrights, which includes a large amount of time and effort spent on writing and rewriting.

Lauren Ragsdale, drama and music graduate and actress for LSS, is attending the festival for her first time this year in “Hand Me Downs” and “The Cost of Saving,” written by Taylor Riga and Noble Brantley, respectively.

Ragsdale said the rehearsal began on Sunday evening, where playwrights and directors discussed logistics, COVID-19 safety precautions and their individual plays. When the cast arrived, Ragsdale said he got used to the space and read all the plays in order of the show.

Monday and Tuesday evenings, the actors rehearsed with their directors. Wednesday was “tech” night. Thursday was a dress rehearsal, and the week ends with performances coming Friday and Saturday.

â€œThis year it’s a staged reading, so it will be pretty much the same as a regular performance, but we’ll have the script binders in our hands,â€ Ragsdale said.

By the end of the festival, 84 plays will have been shown to the public at Studio 6, Kenan and Stone Center theaters on the UNC campus, Coen said.

â€œI started out in the theater as an actor, director and playwright and I’m always amazed at how quickly (students) acquire form,â€ Coen said. â€œIt’s always a pleasure to see their work come to life. ”

To receive the news and headlines of the day in your inbox every morning, subscribe to our email newsletters.