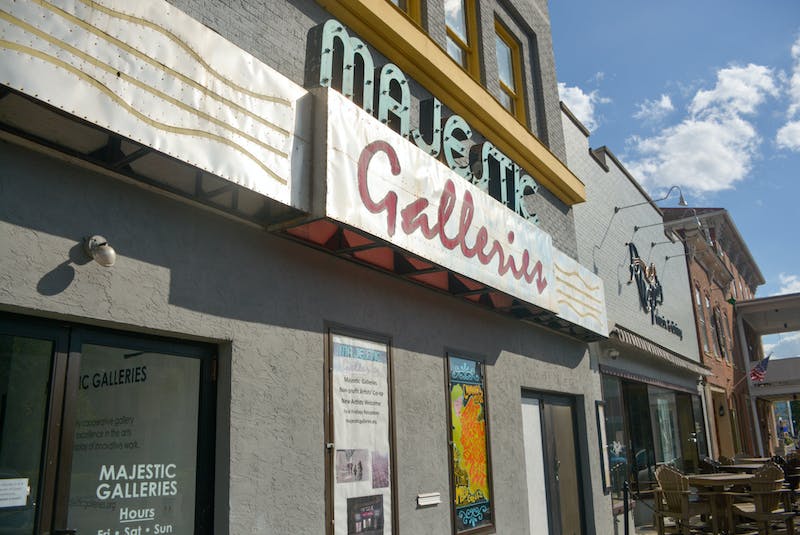 The cannabis museum is a non-profit museum focused on education and research. The museum was established in 2018 and is still striving to find a place to settle permanently and open to the public. While he has yet to announce the location, he aims to find a physical space for the Cannabis Museum to officially be called home by 2022.

In the meantime, the museum has organized its exhibitions in other places around Athens.

Currently the museum has an exhibition located at Majestic galleries, 20 Public Square, Nelsonville, titled “Art Nouveau and the Counter-Culture Movement: The Evolution of the Modern Poster”. The exhibition opened on September 24.

Basil Masri Zada, curator of exhibitions and education at the Cannabis Museum, said the museum is working hard to focus on researching, collecting and preserving knowledge about the artistic, historical, medical and industrial places of cannabis. .

â€œIn this context, we have more than 15,000 collectable items that range from all kinds of works of art, medical records, tinctures, glass bottles and others that are related to different uses and counter-cultivation of cannabis, â€said Masri Zada.

The museum works with different partners to offer different shows. The current exhibit is in collaboration with Ohio University: specifically, the Community Work Study Program. The museum also welcomes students from the OU Arts Administration program.

Tiana Hough, a Graduate Curatorial and Collections Management Intern at the Cannabis Museum, is currently a graduate student at OU studying Arts Administration and Art History. She is currently working on her thesis, of which the current exhibition is part.

Hough organized the current exhibit by learning more about the collection on display and researching their database. The current exhibition consists of postcards and posters, all of which are part of different artist movements.

â€œWhat I landed on is what you see in the Majestic Gallery, and it basically started with my research on these Art Nouveau postcards, especially from JOB rolling papers,â€ Hough said. . â€œThey did art advertisements, which were depicted on postcards and posters, mostly in the 1890s and early 1900s. At the same time, I was also looking at other aspects of their collection: for example , the 60s rock concert posters. “

Hough wanted to bridge his interest in 1890s art and 1960s art in the current exhibition.

â€œI ended up digging deeper and found that they really connect stylistically in terms of content and subject matter,â€ Hough said. “In fact, the Art Nouveau movement directly influenced the art of the 1960s counter-culture movement, as seen in the posters of the 1960s rock concerts.”

Hough said the exhibition reflected different movements, all within different periods of art. Hough worked with Kiana Ziegler, a former multimedia intern at the Cannabis Museum, to create the poster advertising the exhibit. Through the poster, more details can be revealed about the meaning of the collection.

Ziegler said his tasks were to come up with visual identities for the museum and present them through his works on the poster.

The exhibit poster was just one of Ziegler’s many projects, and she wanted to make sure it reflected the overall meaning of the exhibit. When creating the poster, Hough and Ziegler were specifically influenced by artists like Alphonse Mucha. Mucha was one of the foundational artists of Art Nouveau and influenced artists of the 1960s.

â€œHis style, along with other artists of the Art Nouveau period, greatly influenced artists like Stanley Mouse and others in the 1960s who often had very similar styles in their posters,â€ Ziegler said, â€œgenerally had a woman or figure of a kind with crazy lettering. The big thing that changed was in psychedelic culture. They had super bright, vibrant, or almost eye-damaging super neon colors in their poster. They didn’t really care about readability and started doing some really crazy things with the text and text movement and text styling.

With the captivating art style featured in this exhibition, Ziegler said it is aimed at all students and anyone interested in art in any medium. The exhibition tells a story of the Art Nouveau movement, the counterculture movement and the central impact it has had on the perception of art today.

â€œA lot of it, especially when it comes to counterculture artwork and cannabis-related artwork, is just pushing the boundaries and saying to yourself, ‘This is something that happens. happening in our society, in our culture, in our world, â€Ziegler said. â€œI think artists are just very curious and rebellious sometimes because of that, and I think that’s really cool. It’s like one of my favorite things about art.

The exhibition will remain open until October 24 and can be viewed Friday through Sunday from 12 p.m. to 5 p.m.

Masri Zada, Hough and Ziegler encourage all people to come and see the museum on its last weekend and experience the artist movement through the range of posters.

â€œI could be a good advocate for anyone who might be nervous about seeing their first art show. They don’t know what to wear, what to do, or they’re worried they won’t know anything, â€Hough said. â€œI would say just forget about it and go see what you can get out of it. Be open-minded and enjoy it.