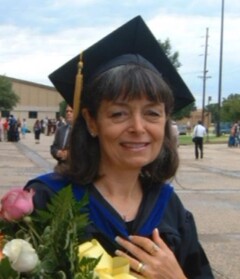 Ruth Penque’s death is mourned by all who have been touched by her life. Born Ruth Ida Joyce on December 14, 1950 in Buffalo, New York, she was predeceased by her parents, John and Jane Joyce, and by her sisters, Mary Joyce Strzelczyk and Judith Joyce Mullen. Ruth is survived by her 48-year-old husband David Penque and their five daughters: Jocelyn Joyce Penque and her fiancee Leo Saunders of London, United Kingdom, Erin Summers Penque Johnston and her husband Michael, Ellen Morey Penque Aoki and her husband Lucas, Elizabeth Sheridan Penque and her fiancee Marcus Leyva, and Jillian Maher Penque Shahbazi and her husband, Naveid, all of Austin, Texas. She is also survived by her granddaughter Moa Summers Johnston, her brother John Joyce, her brother Bob Joyce and his wife Donna, her sisters Estelle Joyce Leary and Jane Joyce Ciamarra and her husband Vince, all of Buffalo, New York, and his brother Guy and his wife Pat, from Honolulu, Hawaii.
Ruth graduated from Mount Mercy Academy in Buffalo in 1968 and D’Youville College in 1973. She received her Master of Arts in English from Pan American University at Brownsville in 1977 and her Doctorate in British Renaissance Literature from London. ‘University of North Texas. in 2003.
Ruth has had an illustrious and varied career teaching English. Ruth taught sixth grade in Niagara Falls, New York for a year before teaching English at St. Joseph Academy in Brownsville, TX from 1974 to 1980. In addition to being a part-time English teacher part-time at Navarro College for much of the 1980s and into the 1990s Ruth taught English at Blooming Grove High School from 1986 to 1992 and at Frost High School from 1992 to 2004. During a three-year stint. Years old in Racine, Wisconsin from 1983 to 1986, Ruth taught at the University of Wisconsin Parkside for a year. . She ended her teaching career as an instructor and later as a professor at Navarro College from 2004 until her retirement in August 2015. While at Navarro, Ruth served as Chair of the English Department for six years old and president of the executive committee of the Navarro College teachers association for one year. Ruth has been recognized twice for her teaching excellence: once in 1992 with the University of Texas Excellence Award for Outstanding High School Teacher, and again in 2008, when she was recognized by the Navarro College Foundation with the Excellence in Teaching Award.
Ruth was known as a woman of great integrity and strong values â€‹â€‹and lived by a mantra of never judging others. A dedicated parishioner of the Immaculate Conception Catholic Church, Ruth continued to grow spiritually throughout her life. She was known for her kindness and her wonderful sense of humor. She seemed tireless, a trait best exemplified by teaching English full time in high school, while pursuing her doctorate and raising five children.
When she retired, Ruth never stopped reading. While she primarily enjoyed works of English literature, she also read theology and philosophy. She also discovered new hobbies: playing the keyboard and learning Spanish. Since 2005, Ruth and her husband Dave have taken two cruises each year, as well as an occasional visit to Shreveport. Above all, she loved to visit and laugh with her five daughters and granddaughter.
Throughout her adult life, Ruth was an avid runner. Although she has competed in many races, Ruth would be very proud to have completed two Austin marathons, as well as several half marathons. In November 2013, running was replaced by walking because Ruth was diagnosed with multiple myeloma cancer. Despite receiving chemotherapy for eight years, Ruth continued with an active program. However, in June, the cancer broke out and multiple myeloma finally claimed Ruth. She’s gone in her body, but her spirit lives in her daughters.
Visitations are scheduled for Wednesday evening, October 20 at Corley Funeral Home from 5 p.m. to 8 p.m., with a rosary to be recited at 6 p.m. in the chapel. A funeral mass will be held at the Immaculate Conception Catholic Church (3000 Ouest Autoroute 22 in Corsica) on Thursday, October 21 at 10 a.m., followed by a celebration of the life of Ruth at the church pavilion. Mass participants are asked to refrain from wearing dark clothing. In lieu of flowers, Ruth asked for donations to the Dr. Fab Scholarship, to be given to deserving children of the James L. Collins Catholic School. These contributions can be made to the Dr. Fab Scholarship, c / o Pastor’s Guild, James L. Collins Catholic School, 3000 West State Highway 22, Corsicana, Texas 75110 or go to the link, https://gofund.me/af6b956c
To share memories and condolences with the Penque family, visit www.corleyfuneralhome.com