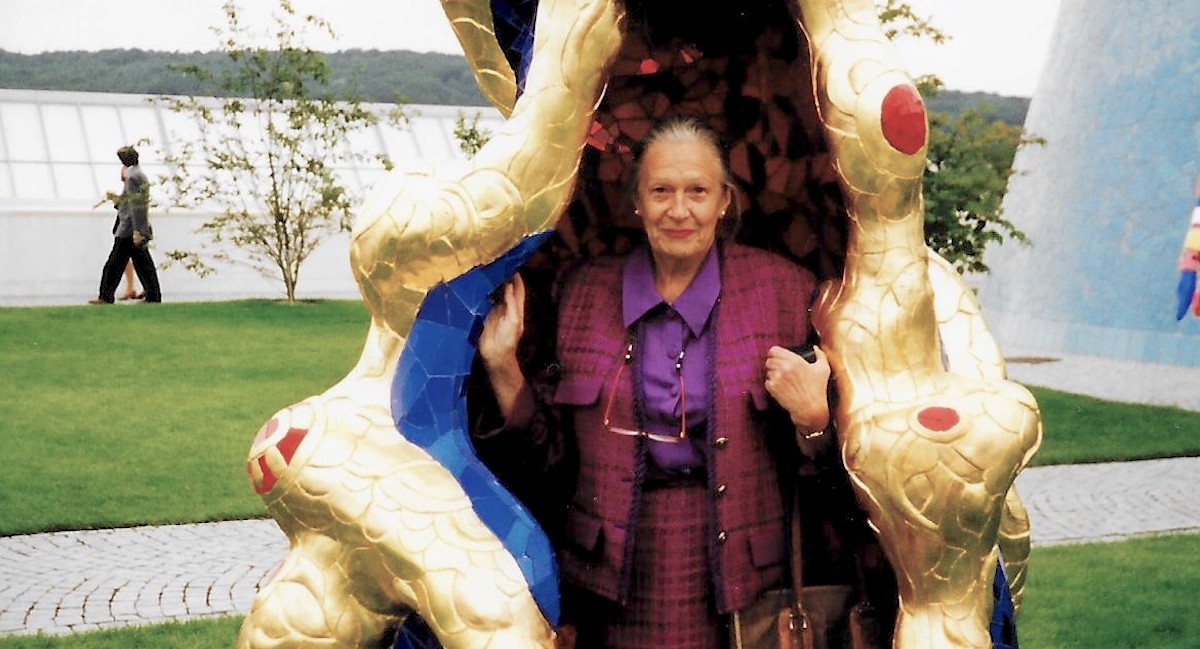 A remarkable 70-year career in the art world

Yvonne Robinson has been a prominent figure in the art world for over 70 years. Friend of David Sylvester, Bacon, Freud, Pontus Hulton, Tinguely, Augustus John, Paolozzi, Turnbull, and most recently archivist of her great friend Niki de St Phalle, she has the gift of being in the right place at the right time.

In 1946/7 she worked for Sir Robert Witt in Portman Square / d1952) to establish the Courtauld Institute. In 1950, she joined the Arts Council while plans were underway for the Festival of Britain. The Festival was a triumphant and popular success. I was nine years old and I was taken by my parents. I remember it very well to this day. It has been said: “In an island hitherto largely devoted to dull browns and greens, following the 1951 Festival of Britain, contemporary British design has boldly married strong primary colors.”

Meanwhile, Yvonne was in charge of all the art. â€œIt was a terrible responsibility for a little girl (she was 24). We went to Henry Moore’s with a van. I think the Moore we installed in Battersea Park is still there!

After five years with the Arts Council, Yvonne worked with famed Erica Brausen at the influential Hanover Gallery before moving to Gimple Fils when it closed in 1973. She stayed with Gimps – as she called them – until her retirement. retired then took Niki’s Archives. By that time, she had met almost every famous artist in UK and Europe.

The Hanover gallery was special. â€œErica was a wonderful person. She knew how to choose artists; she was so sure of her choice. Bacon said she had the best eye in Britain? / Europe. Erica had been in Paris before the war and knew Picasso, Caesar, Hemingway, Man Ray and all that circle. Her connections allowed her to launch her very important gallery in 1948. She had access to Miro, Max Ernst, Duchamp, Giacometti, Manzu, Marini. She educated the British. She started Bacon with her first show in 1949 and also showed early William Scott and Freud. It was an honor to meet her. Hanover also showed Matisse for the first time in the UK.

Yvonne’s family was not impressed with the art world. After spending the war alone in the Lake District caring for her younger siblings, “with no heat, no lights, no food and no phone”, she begged her father to return to London. When she left school, she had to do full-time compulsory war work. â€œI have spent two years of my life banging on the bomb supply. I never lost my skill. It was always helpful. I can also type in French – French typewriters are quite different. I remember the day I was “released” from war work, 1946. When I went to look for a job, I said that I wanted to work in art. They sent me to the V&A, but it paid a few cents. Then there was a job with “a cranky old man.” But â€œyou won’t last longâ€. But she did. â€œSir Robert Witt was fascinating. He was the key to my whole future.

In Portman Square, Sir Robert needed help with his library of 2 million photos. â€œWe had all the catalogs from Sotheby’s, I cut out the photos, wrote the sale date, stuck on gray paper and put away in boxes. On my last visit, my gray sheets were still there! Sir Robert has always said: a photo is useless unless it is written on the back. He was only interested in the old masters. Nothing contemporary. I have learned so much.

The National Gallery reopened in May 1945 after the collection was taken out of safe storage from the caves of the Welsh Slate Quarry where the images spent the war years. The building had suffered serious damage during the bombardment; tarpaulins and corrugated sheets remained on the roof for many years. â€œWe went to the first reception of the trustees. It took place in the few relatively intact rooms in the east wing. I pushed Sir Robert’s wheelchair. The photo had been cleaned up during their Welsh stay and after years of gray dust and rubble visitors marveled at the intensity of their colors. â€œSir Robert was talking about the paintings and soon a crowd gathered. It was like an art history lesson for all of us.

Yvonne also obtained a scholarship from the Anglo-French Center to study painting for a year. â€œI painted day and night,â€ she says.

In the meantime, she had fallen in love with a young Polish artist, Stefan Knapp. â€œHe was a Spitfire pilot, still in the RAF and had an exhibit in a small gallery. He later went to the Slade on a veteran’s allowance and had four solo exhibitions with Erica between 1954 and 1963. He was very well known for his magnificent enamel murals, which involved the melting of glass on top of glass. light steel.

Yvonne had spent a year in the United States. â€œWe crossed America to LA! She initially stayed at the YMCA in Hollywood until she found a well-paying job in advertising. Still so beautiful now, she must have attracted all eyes. But when she got a letter from Stefan, she sent it back to London! When her son Robin was born, Erica was a godmother.

The new Hanover gallery caused a sensation in London, shining “like a brilliant act in the dusty art world of contemporary London” and in 1958, Yvonne was part of the team. â€œErica trusted me. She sent us to Paris in a small Fiat to collect the sculpture of Caesar. She let me do things like that. Yvonne stayed for 15 years until it closed in March 1973. Several artists from Hanover went to the famous Gimpel Fils, such as Yvonne Robinson. At first, she hesitated. I knew it would be good to work with Peter Gimple; he was wonderful, very nice to me, but Kay and the Gimple boys were another matter.

Peter was the son of RenÃ© Gimpel, the famous Parisian art dealer. Gimpel Fils was founded in November 1946 in? 30 Davies Street, Westminster, just off Grosvenor Square. The first exhibition was based on a small part of RenÃ©’s French collection sent to London before the war. Most of its stock was lost in Paris. In the 50s / 60s, Gimpel Fils was very influential. Representing major artists of the time, such as Barbara Hepworth and Ben and Nicholson.

In Gimpels, Yvonne takes care of Alan Davie, who spends much of his time painting in Saint Lucia in the Caribbean. Yvonne had to fly away with oil painting supplies, as well as hairpins for his wife, Billy.

Niki de St Phalle followed Yvonne to Gimples. Years later, she was at a dinner party in Germany when Niki announced that she was looking for someone to settle her papers. â€œI was almost 70, so I said I was interested. She said, come next week. So I went to Paris, to Poissy and lots of trunks came out of the attic. It was a 3 year job. She rented an apartment for me, for this huge task. Pontus, then director of the Center Pompidou, gave me the best advice. He told me to take 30 trestle tables and put a pile on each one, take Niki and ask her to rearrange them. It worked! I also stayed six weeks at Tinguely Castle – very creepy. “

After her retirement, Yvonne lived in Aups in the south of France, where her son and his family still reside. This fall, the Stefan Knapp Museum opens in Poland, a fitting memorial to a visionary artist who survived the Siberian Gulag, won a Churchill scholarship and won the Polish Cross of Valor. No wonder she rushed to him!