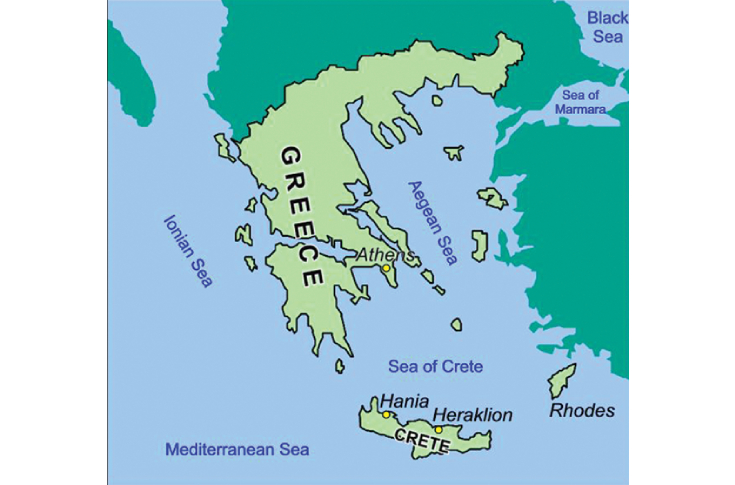 The country of Greece, located in the southeastern corner of Europe, is a nation with thousands of islands, large and small, dotting the seas that surround the continent. With a coastline twice as long as that of India but twenty-five times smaller, Greece has a dynamic maritime culture carried by its islands. Greece’s long history rivals those of other ancient cultures such as Egypt, Mesopotamia, China, and India. With iconic figures from Alexander and Aristotle to Plato and Ptolemy, the idea of ​​Greek civilization continues to dominate the Age of Antiquities.

However, the discovery of the Minoan civilization in the 1890s eclipsed Greek civilization for many reasons. Based on the island of Crete, the largest island in Greece, it was perhaps the first advanced civilization in Europe, predating mainland Greece by over a thousand years. Its antiquity dates back to 2700 BCE. It thrived for over 1,300 years before a combination of natural disasters and conquest of mainland Greece led to its collapse around 1420 BCE. Perhaps the most important discovery during the excavation of the ancient remains of Crete was a large number of clay tablets which were inscribed in two scripts. They were quickly recognized as the oldest writing systems in Europe and named Linear A and Linear B. While Linear B writing was finally deciphered after fifty years of study by many scholars and came to be. proven to be written in a very ancient form of the Greek language, Linear A, like the Indus Valley Seals, is still an undeciphered code.

The first example of typography that has been discovered so far also comes from the island of Crete. It is a circular disc that has been dated to around 1700 BCE when the Minoan civilization was at its peak. With a diameter of about 15 cm and a thickness of 1 cm, the Phaistos disk is made of fired clay and is printed with symbols or characters arranged in a spiral on both sides. Punches on which the symbols were carved or cast were imprinted on the soft clay to create an imprint. The same hallmark was used to create a symbol multiple times on the disc, making it one of the earliest representations of letterpress. From the point of view of printing and typography, the discovery of the Phaistos Disc in Crete is the most significant. It is currently in the Archaeological Museum of Heraklion, the capital of Crete.

Clay tablet inscribed with linear writing B, circa 1300 BCE

With a leap of four thousand years onward, the island of Crete continues to celebrate its primacy in two areas related to printing – the art of writing and the science of typography – by hosting the only major museum in printing in Greece. Welcome to the Typography Museum in Chania, Crete!

From concept to reality
The history of the Typography Museum is closely linked to the life of Yannis Garedakis. Circumstances forced him to join a press room in Athens quite early in his life. He then joined a newspaper published from the island of Crete. Garedakis remembers his early days in the printing industry in the early 1960s:

I was still a young man when I first entered the field of regional press, working for the historical newspaper Hania Paratiritis… I was there, all of a sudden, in a basement, locked in a corner, preparing news transcripts – you see, there was no news agency, no internet, etc. at the time – and making corrections. On the other side of the room, in front of the composition benches, typographers have assembled the font, letter by letter, composing the text. Standing for hours, silent, as if they were attending a sacred ritual, they arranged the letters at the stick of composition forming sentences, then the galleys with complete texts and finally the pages of the diary. Tired but proud at the end of the day. Last touch on their work – for me it was a kind of caress of the typographic plate, before printing started.

After a few years in the world of print media and journalism, Garedakis ventured to start his own newspaper, titled the Haniotika Nea (Chania News). Founded in 1967, it was based in the city of Chania (or Hania) which was the capital of Crete for a long time until it was replaced by Heraklion in 1971. Chania is one of the oldest cities in the world and claims be permanently inhabited for the past five thousand years or more. The first few years were very difficult for the newspaper as it was published when Greece was ruled by a military junta which tolerated no opposition. Over the years, hand-text composition has given way to Linotype and hot-melt composition. Photocomposition and digital composition follow each other quickly, and the newspaper has to constantly upgrade its printing technology. Haniotika Nea is now the most widely read regional daily in Greece
newspaper with a physical circulation of 6,000 copies.

Even as he built the reputation of his newspaper, Yannis Garedakis was aware that the world of printing technology was changing at a rapid pace. Each successive decade has seen a few more machines made redundant. He recalls the motivations that led him to:

Years go by and the newspaper flourishes economically thanks to its readers and advertising clients. It was then that the quest into the wonderful world of typography and its people began, and the journey leading to the founding of the Museum began. Gradually we began to collect printing press machines and other items related to the art of typography, a process that led to the birth of the Museum of Typography, managed by the Haniotika Nea newspaper. The museum was inaugurated in May 2005.

The word typography is duplicated in the Greek language. Not only does it describe the act of composing text i.e. typography, but it also means the process of printing. Thus, the museum was named “Museo Typographia” in Greek or Museum of Typography.

A range of exhibitions
The printing press arrived late in Greece compared to many other European countries which were the centers of innovation for printing. Although the books were printed in Greek from the 15th century onwards, printing in Greece itself gained momentum much later. As in India, most printing machines were imported from elsewhere. The fonts used to print in Greek were designed in centers like Venice. It was not until the 19th century that Greece began to develop its own printing culture.

Yannis Garedakis, in partnership with his wife Eleni, started collecting machines from all over Europe which represented all printing technologies as they evolved over five centuries. They have a faithful replica of the printing press which was operated by Gutenberg. Most of the machines were salvaged from their own printing press, including an Intertype hot melt. Most of the machines are in working order and visitors are encouraged to use a few.

Exhibition on the history of writing

The museum also celebrates Crete as the motherland of writing in Europe with a special installation on “the history of writing”. Designed by artist-typographer Antonis Papantonopoulos, the exhibition traces the development of writing, rock art and hieroglyphics to rudimentary scripts and writing in its own right. The museum has also acquired many works printed in the 16th and 17th centuries which are on display. According to printing historian Alan Marshall, the Museum of Typography illustrates how “a private collection [can] become a museum thanks to the will, the perseverance and the generosity of two people actively involved in
printing and publishing.

Advance the cause
The Typography Museum under the leadership of its founders, Eleni and Yannis Garedakis and its director, Elia Koumi, has been very active in advancing the cause of printing museums around the world. They enthusiastically participated in the Association of European Printing Museums (AEPM) and successfully hosted the AEPM annual conference in 2017 in which a case was made “for the importance of museums in general and printing museums in particular as measures and vectors of progress, culture and democracy.

A Greek regional newspaper with a circulation of a few thousand copies has succeeded in building a world-class museum focused on the fields of writing, typography and printing through the sustained efforts of its owners and publishers. They were aided by donations of printing treasures from many sources, supported by the local government, and recognized as protecting and nurturing local heritage and culture. India has thousands of newspapers many of which have a legacy stretching back a century and more. Maybe a hundred of them have a daily circulation of lakhs and a few million. We hope that some of the
they will commit to protecting the heritage of the printed matter which has nourished and enriched them.