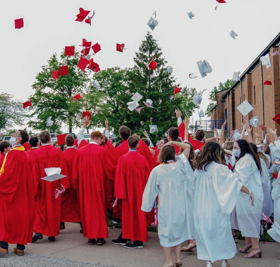 Two NKY schools are among seven schools in Kentucky that have been named National Blue Ribbon Schools for 2021, the U.S. Department of Education said.

Recognition is based on a school’s academic performance or its progress in closing the achievement gap, Education Secretary Miguel Cardona said in a statement on Tuesday.

The NKY Kentucky schools on the list were Blessed Sacrament Elementary School in Fort Mitchell and Saint Henry District School in Erlanger.

â€œThis year’s cohort of laureates demonstrate what is possible when engaged educators and school leaders create vibrant, welcoming and empowering school cultures where rich teaching and learning can flourish,â€ Secretary Cardona said. . â€œI congratulate all of our Blue Ribbon recipients for working to keep students healthy and safe while meeting their academic, social, emotional and mental health needs. In the face of unprecedented circumstances, you have found creative ways to involve, care for, protect and teach our children. Blue Ribbon Schools have so much to offer and can serve as a model for other schools and communities so that we can truly build back better.

This was St. Henry’s second national blue ribbon award, having previously won the honor in 2012.

St. Henry District High School Principal David Gish also reiterated the importance of winning a second National Blue Ribbon Award this year. â€œThis recognition is all the more significant as the qualifying academic data came from our class of 2020, a class that left campus on Friday, March 13, 2020, finishing its final year without ever returning to a traditional classroom. “

Epplen is the son of Kelly Epplen of Edgewood and the late Michel Epplen. Finley is the son of Brian and Kim Finley of Crescent Springs and Smith is the son of William and Sara Smith of Burlington.

Last fall, approximately 1.5 million juniors at more than 21,000 high schools across the country entered the 2022 program by passing the PSAT / NMSQT qualifying test. Of these juniors, only 16,000, or less than 1%, are named semi-finalists of national merit, on the basis of their scores in this exam. These academically talented students are now eligible to claim finalist status, going one step further in the competition for some 7,500 scholarships worth nearly $ 30 million.

Covington Classical Academy learning to be a crime scene investigator.

Students at Covington Classical Academy have teamed up with the Louisville FBI Emergency Response Team to find out what goes on behind the scenes of a real crime. Students gained hands-on experience – taking fingerprints and learning how investigators use them to solve crimes.

They also learned how crucial photography is to an investigation, how blood is detected, and how alternate light sources can be useful in dark places. And they had a thorough examination of the ERT teams’ truck that accompanies each investigation.

The group called it a great experience – and also said it was a lot of fun.

â€œI am extremely proud of our employees who work in our 16 colleges and the Versailes office,â€ said KCTCS President Paul Czarapata. â€œBecause of them, the KCTCS is not only one of the best in Kentucky, but also in the country. “