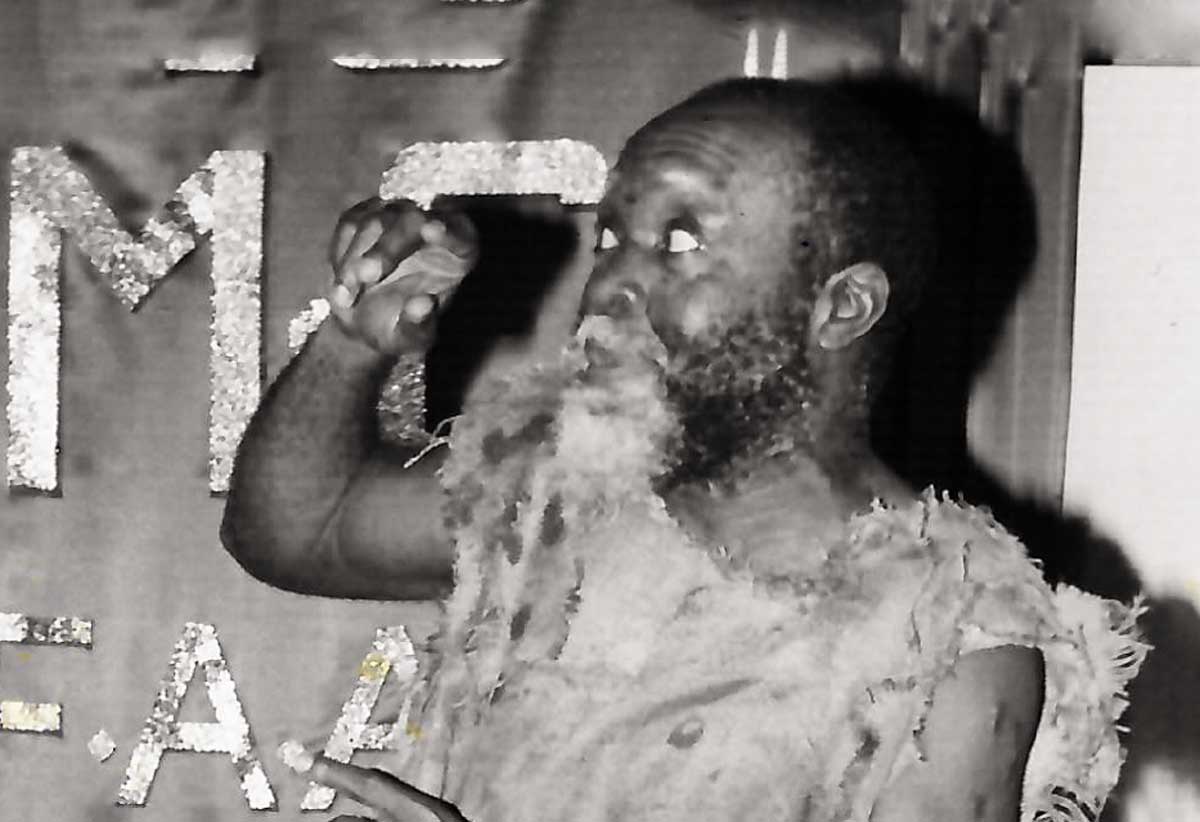 On the morning of September 16, 2021, the Foundation for Cultural Development received the heartbreaking news of the death of our legendary and honored 2020 cultural icon, the indomitable Arthur Léandre Fédave Jacobs. The emotions aroused by the death of this artist of the theater arts and sculpture have touched us deeply at the CDF and the cultural fraternity and will undoubtedly leave a void in the world of arts and culture.

To his many friends and admirers, he was a gentleman of few words but a lot of depth and talent. He resided in the community of Independence City, in the constituency of Castries East where he was well known and revered by the men, women and children who met him personally or in his professional life.

He has been described as a mixture of humility and passion. His citation for the 2001 M&C Fine Arts Lifetime Achievement Award described him as an artist in the truest sense of the word; – concerned less with its distinctions and awards, and more with art itself. He stayed focused on being true to the creative sources that spring from him; be receptive to what needs to be said, heard and felt; and simply to be honored to have contributed in his own way to “good art”.

As a young man his love for the creative arts was evident and Arthur became a self-taught craftsman and sculptor – working both with stone and a variety of woods such as samaan and mahogany that are found naturally in the tropical forests of Saint Lucia. Fascinated by the history of ancient Egypt, and having visited the Museum of Fine Arts in Boston, his work often reflects the inspiration of this rich North African civilization.

As is often the case with artists, his creativity seeped into more than one genre – under the influence of Roderick (Roddy) Walcott, Jakes, as he became more affectionately known, also developed his love. for music and theater. He went on to become a Turks Steelband veteran and, more importantly, production manager for the annual Saint Lucia Arts Guild theater festival productions at home, and at CARIFESTA 1972 (Guyana) and 1979 (Cuba). What is remembered most is his ranking among the most notable actors of Saint Lucia at the time hailed across the Caribbean as the period of Saint Lucia’s renaissance, the 60s and 70s. .

In 1960, at the age of 23, Arthur Jacobs took the stage at his first major festival with the Saint Lucia Arts Guild, that of The Stranger in “Africa Sling Shot”. He will become a renowned actor, playing main and secondary roles in several productions, local and regional. Among his most memorable are his portrayal of Mephistopeles in “The Tragedy of Dr. Faustus”, as Herod Antipas in “Salome” and “Macak” in Sir Derek Walcott’s Dream on Monkey Mountain played in Trinidad. He cites as the highlight of his acting career, his role as Toussaint L’Ouverture in Sir Derek Walcott’s famous world premiere of Haytian Earth, a production commissioned by the government of Saint Lucia to commemorate the 150th after the emancipation from slavery, which was also shot for cinema. Mr. Jacobs has toured with Sir Derek Walcott during festival seasons in Trinidad, Guadeloupe and Italy. Mr. Jacobs has also appeared in at least five short films.

Despite his many award-winning lead roles, none have given him a sense of accomplishment like fathering his daughters Barbara, Laurima and Jessica.

As a sculptor, he created bronze busts, relief sculptures and silhouettes of famous Saint Lucians such as Garnet Gordon, Louis McVane, Karl LaCobiniere, Sir John Compton, Sir Derek Walcott and Sir Arthur Lewis. Arthur Jacobs was commissioned by successive governments to produce national art gifts to foreign diplomats, prime ministers and members of British royalty. These works are to this day on display in various collections from Government House to palaces everywhere.

Even after his retirement from the stage, Arthur Jacobs remained distinguished as the most award-winning actor in Saint Lucia; at least six of these came from the annual eight-year Arts Guild festivals, which are still considered a time of artistic renewal led by our revered icon – Roderick Walcott. It should be noted that at the time of his death, our poet laureate and playwright Sir Derek was planning a celebration of Arthur Jacobs, his work and his formidable talent. Sir Derek compared his stage presence to that of famous African-American actor Lou Gossett Jr. His consideration and affection for “Jakes” was so high that Sir Derek immortalized him in poetry in his penultimate collection “White Egrets” “. Given the mutual affection between the two men, Sir Derek’s tribute is Mr Jacobs’ ultimate affirmation and approval.

In 2018, Mr. Jacobs received the Saint Lucia Gold Medal of Merit for his indelible contribution to the arts. In 2020, the Cultural Development Foundation honored him as the 2020 Icon of Saint Lucia in its annual Cultural Icon Series. The icon series recognizes those who have made a significant contribution to our concept of national culture, to the quality of life and to the destiny of a nation, leaves a legacy for future generations, who define and contribute to a system or a a life of cultural celebration, promotion and development for a nation whose names are recognized by a large part of the population of Saint Lucia.

The CDF fondly remembers Jakes’ presence at the 2019 CARIFESTA Dry Race held at the National Cultural Center before the cast left for Trinidad. Her emotions were running high, tears of joy were streaming down her cheeks, with the satisfaction that her life’s work in the theater had not been in vain. He believed that the theater had a bright future in the hands of young people, who were instrumental in such a magnificent work of writing and production. His daughter, Barbara Jacobs Small was very happy that Jakes was alive and present to experience this CARIFESTA production.

The Foundation for Cultural Development, Government and People of Saint Lucia, Minister and Ministry of Tourism, Investment, Information, Culture and Creative Industries express their sincere condolences to the family, to friends, contemporaries and artists in its most difficult times. Fly with the angels dear Jakes and sleep at the Theater du Ciel with your director, God our Father.

What Satoshi Nakamoto left us