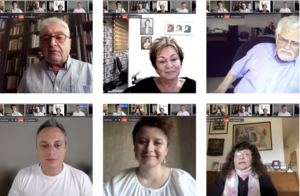 JERUSALEM, ISRAELL, June 23, 2021 / 24-7PressRelease / – â€œMarc Chagall paints in Yiddish; if you don’t know Yiddish proverbs, you can’t understand his paintings, â€said Roza ben Litay in an online session organized by Limmud FSU in cooperation with the WJC International Yiddish Center, on the place of Yiddish in the world. contemporary Jewish and Israeli identity and culture. â€œLanguage is a state of mind, and we have to teach the Yiddish language so that people can understand the context of Yiddish literature. We cannot allow the Holocaust to destroy 1,000 years of Eastern European Jewish culture. ”

Officially titled â€œYiddish – why do we need itâ€, the session featured a series of speakers among whom there was no disagreement. Yiddish is part of the history and culture of the Jews of Eastern Europe; the challenge for Yiddishists today, they all agreed, is how to keep the language – and its culture – alive. Or, as the chairman, Israeli-Russian comedian Ilya Akselrod said in his opening remarks: â€œYiddish cannot be a dying language; it must be something in our future.

Speaking to an international audience of activists from the Limmud FSU, founded in 2006 by Chaim Chesler and Sandy Cahn, and led by President Matthew Bronfman and President Aaron Frenkel, Litay, daughter of the late Nechama Lifshitz, who, as performer of Yiddish songs in the Soviet Union in the 1950s and 1960s, made a unique contribution to the maintenance of Jewish culture and identity in the post-war and post-Holocaust Soviet Union, a called for the reconstruction of an educational system to teach Yiddish in Israel. â€œYiddish,â€ she said, â€œis part of our soul. ”

Dorit Golender, former Israel Ambassador to Moscow and vice president of community relations for the Genesis Philanthropy Group, noted that Yiddish performances in the Soviet Union, such as those given by Lifshitz, were a symbol. â€œThe Zionists dreamed of coming to Israel in Hebrew, but Yiddish has a different place, a wealth of culture, a wealth of writers. Hebrew is the ancient language of the Torah and the Talmud; Yiddish is the deeply expressive language of the Jews of the Diaspora. We must remember and revive the language because it is the story of our parents and grandparents.

Revive it, argued an Israeli doctorate specialist in Yiddish literature. Mordechai Yushkovsky, academic director of the Yiddish International Center of the World Jewish Congress, â€œis a complex challenge. It’s kind of like arguing over what was the chicken or the egg first – do we get the educators or the students first? Today, interest in the language is part of the journey back to our Jewish identity of previous generations, part of the search for our roots. And so we have to teach the language through culture – literature, humor, folklore, theater, and not the other way around. ”

Masha Makarova, head of educational projects at the Russian Jewish Congress, noted that her path to Yiddish began with an immersive study of Yiddish texts by Jewish authors from pre-war Poland, during her field trips. in Jewish communities that do not currently exist. In her subsequent research, she discovered Birobidzhan, a Soviet Jewish republic, where until now Yiddish continues to be the official language in accordance with the Russian language. Through her research, she identified a unique Birobidzaner identity (not discussing the number of Jews who live there) through the Yiddish language and the specific history of the region, every citizen is a bit of a Jew. This has created an interesting phenomenon of non-Jews learning the Yiddish language and activists working with Yiddish culture.

The best example would be Elena Sarashevskaya, editor-in-chief of the Yiddish newspaper â€œBirobidzhaner Shternâ€, published in Birobidzan. Masha Makarova also talks about an important project of the Russian Jewish Congress called â€œYiddishkaytâ€. Through this project, the RJC supports various cultural and educational initiatives linked to Yiddish, both those that already exist and those that are planned for the near future. For example, an important project is the organization of an academic program to train Yiddish translators, who will be able to work with Jewish literature and sources in this language. The RJC is also preparing educational online courses in Russian on the history of Yiddish Jewish literature for a wide audience, also in partnership with the Yiddish International Center of the World Jewish Congress.

â€œIn Israel,â€ noted Shmuel Atzmon, renowned Israeli actor and founder of the country’s Yiddish theater, â€œpeople identify being Israeli as part of the country, as they link Yiddish to being Jewish. . For religious Jews, if you don’t observe the mitzvot [the commandments that regulate religious practice and behavior] you are not Jewish, but neither are you a Jew without Yiddish. Yiddish is a civilization, much more than a culture. For Yiddish writer and Nobel Prize winner Isaac Bashevis Singer, language expresses everything a people have experienced for hundreds of years. It is, Atzmon concluded, “our responsibility to ensure that there are opportunities for the younger generation in Israel to learn the language – alongside learning Ladino.” [the language of the Jews who moved from Spain to the Balkans and the Ottoman Empire after the expulsion in 1492] and connect to culture. There is, he remarked sadly, “no song on the radio today in Yiddish.” â€œWe have to create them and then the younger generation will sing them. ”

While Dorit Golender admitted that Israel is a young country and still hasn’t had time to do everything, Atzmon urged activism to strengthen the position of the language. â€œPeople told me I was crazy to put on the Yiddish language theater; now we have to be crazy again and get to teaching the language.

The WJC International Yiddish Center in Vilnius aims to generate interest in the study of Yiddish culture and seeks to introduce and perpetuate Yiddish heritage.

The special event was made possible through the generous support of Genesis Philanthropy Group.

Publicity. Scroll down to continue reading.

Polestar offers to exchange its vintage cars for valuable art

In the West, looted bronzes are museum pieces. In Nigeria, ‘They are our ancestors.’