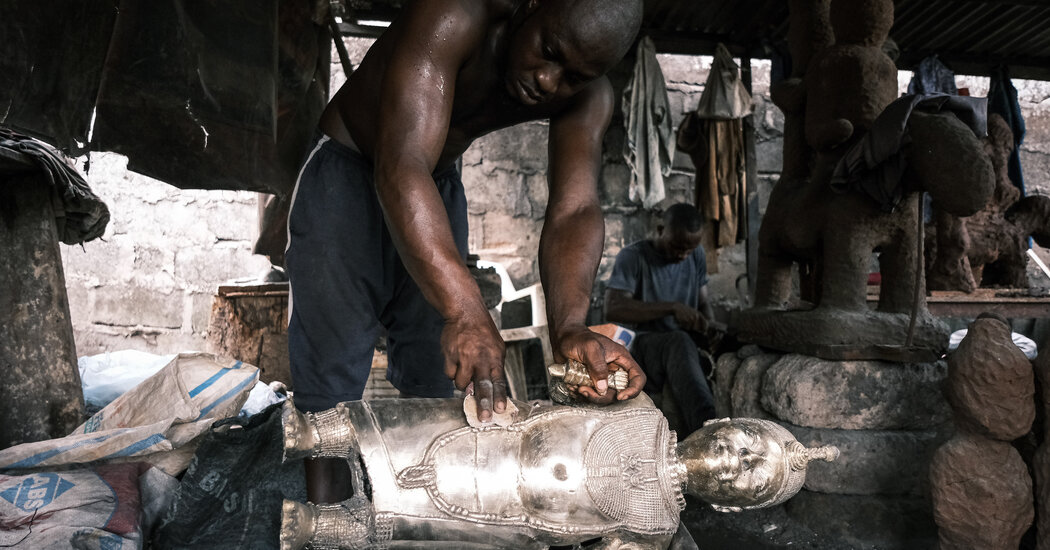 In the West, looted bronzes are museum pieces. In Nigeria, ‘They are our ancestors.’

BENIN CITY, Nigeria – The young artist leafed through grainy photographs of delicate ivory masks of Queen Idia, seeking inspiration for her own painting of the legendary Warrior Queen. The masks were made around 500 years ago by a guild of sculptors just around the corner from the studio where artist Osaru Obaseki worked.

Five of these ancient masks are known to exist. But Ms. Obaseki has never seen one. None are in Africa, let alone in Benin City, his hometown in southern Nigeria. One of the most exquisite is in a display case in a basement of the British Museum in London. Another is in the Africa gallery at the Metropolitan Museum of Art in New York.

These and more than 3,000 other works – and possibly thousands more as well – were stolen by invading British soldiers in 1897, and are now treasured pieces in the collections of some of the most important museums in the United States and Europe.

For years, Nigerian artists, historians, activists and royals have been crying out for the recovery of these pieces. And, as conversations about racism and the legacy of colonialism have multiplied around the world in recent years, some institutions are beginning to respond to these calls.

But many Nigerians are outraged that only a fraction of these treasures are even in discussion for return – and not even the most expensive ones, like the Queen Idia masks.

For them, stolen works are not just physical works of art, but stories. They are part of the bedrock of the identity, culture and history of Benin – the city of Nigeria that was once part of the Kingdom of Benin, not the modern nation of Benin.

â€œThey were made to tell stories, to keep memories and to pass all those stories and memories from one generation to the next,â€ said Enotie Ogbebor, an artist from Benin City and founder of Nosona Studios, where works Ms. Obaseki. Western institutions had transformed these pieces into “objects of admiration, while they were objects containing information,” he added.

Some of the artifacts – known as Benin bronzes, although most are brass and some are wood and ivory – were religious objects, used in shrines. Oba, or king, wore masks like those of Queen Idia during important ceremonies. A series of intricate bronze and brass plaques, some of which are now displayed on a wall in the British Museum, each told a piece of the kingdom’s history, together creating a cohesive narrative.

For years, museums have resisted the return of foreign treasures. The Metropolitan Museum of Art, the Louvre and 16 others supported in 2002 that global collections like theirs served “the people of every nation.” In Europe, where collections are often owned by the state, museums have often said that the decisions are not theirs.

But in April, Germany announced that it would return a “substantial” number of Beninese bronzes next year. The National Museum of Ireland plans to return 21 items as well as.

The British Museum had already mentioned the idea of â€‹â€‹loans, but never of full restitution. The Met had no plans to return his mask of Queen Idia, said Kenneth Weine, a spokesperson. No other institution has said it will return any of the masks either.

The restored works are probably intended for a new museum in Benin City, which will be called the Edo West African Art Museum. It’s designed by architect David Adjaye and is slated for completion by 2026, if the creators manage to raise around $ 150 million. A digital project will bring together photographs and oral accounts of the looted objects.

At the moment, there is little to see of the planned museum site beyond the Red Earth, an abandoned hospital, and a few damp-stained walls. Before construction begins, there will be a major archaeological dig, funded in part by the British Museum, to excavate the buried remains of the Old Town.

For now, Benin City’s existing museum is a small building in the center of a busy intersection that receives little government funding and cannot always afford to keep the lights on.

Inside its red walls are a few solitary plaques and an image of a mask of Queen Idia. An entire wall is occupied by an enlarged 1897 photo of British soldiers seated, smoking cigarettes, surrounded by their booty.

In Britain, the events of 1897 are known to many as the Punitive Expedition. According to this version of the story, a group of British officers came to Benin to meet with the oba, but were killed. So the British sent 1,500 men, some armed with the first machine guns, to avenge their deaths.

But in Nigeria, it is known as the Benin Massacre, due to the many locals killed by British forces. The British were looking for excuses to attack Benin, say Nigerian historians, because the oba had too much power. And the soldiers knew that Benin contained untold riches; they said it in letters home.

They took most of this wealth.

It was â€œthe equivalent of bringing Renaissance works to Europe to the modernists,â€ said Mr. Ogbebor, founder of Nosona Studios. â€œBach, Handel, Shakespeare, Mozart, everyone. This is what was done to us. Imagine if this had been taken away from Europe in the past 130 years. Do you think Europe would be where it is today?

Theophilus Umogbai, curator of the Benin museum, agreed. â€œIt’s like burning down huge libraries,â€ he says.

The treasures should be returned to a trust which aims to bring together the current oba – the descendant of the deposed king in 1897 – and regional and national governments, although some internal disagreements between them need to be resolved. (For example, the oba said, in a written statement to the media, that he should be the sole recipient of the treasures and that anyone working with the trust is â€œan enemyâ€.)

Over the past decade, knowledge and outrage over the looting of Beninese works of art has deepened.

In a 2010 survey of residents of Benin City, from market women to politicians, Kokunre Agbontaen-Eghafona, professor of cultural anthropology at the University of Benin, found that only about half of those interviewed knew that works had been stolen by the British. This year, a pilot study for a planned repeat survey showed that awareness jumped to around 95 percent.

â€œThey know about it,â€ she said. “And indeed, they want the restitution of our objects.”

Treasures, although long absent, are still woven into everyday life. A tailor in the old town keeps a picture of Queen Idia hanging on his wall, inspiring his designs. In the grand abode of John Osamede Adun, a businessman from Benin City, a shrine is tucked away in a hallway, with a few royal heads in bronze, at the time undetermined.

â€œThey are our ancestors. Our fathers, our grandfathers, â€Mr. Adun said, turning on a light to reveal dozens of more bronzes in his stairwell.

â€œAt night they wake up and talk,â€ he said. “I know the language to use for them.”

Some members of the former guild of bronzers still practice the trade of their ancestors.

One afternoon in May, men from the old Aigbe smelter prepared to throw, one tossing pieces of junk – an old radio antenna, a bracelet – into a melting pot emitting green smoke, while another kindles a fire around pieces of red earth held together with wire.

The Aigbe family has been founding bronze for so long that, they say, one of the plaques stolen in 1897 was made by an ancestor.

Young artists working at Nosona Studios, which are housed in an old crumbling supermarket, have blacked out the windows that overlook the old museum and, beyond, the Oba Palace. The modern city, with its booing cars, its thrum Afrobeats, its peddlers selling padlocks and mangoes from wheelbarrows, reminds them of what Benin could have been without the events of 1897.

Derek Jombo, the first artist to paint over windows, said he couldn’t stand looking out.

â€œI am aware of what this city should be like,â€ he said.

Ms. Obaseki, the artist, wishes she could look at Queen Idia’s masks from different angles and see their exact hues.

â€œIt’s quite different when you look at an object physically and see all sides of it,â€ said Ms. Obaseki, 28. She took a handful of the burnt sand she was using, collected from a foundry of bronze smelters, and let it run through her fingers.