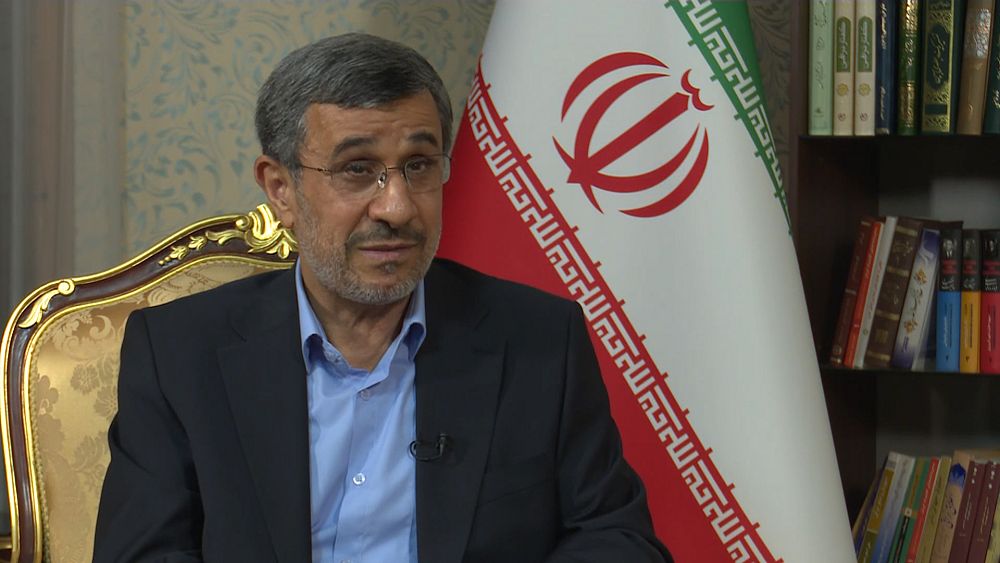 Iran heads to the polls this week at a pivotal moment for the country – nationally and internationally.

And our guest on the Global Conversation is former Iranian President Mahmoud Ahmadinejad.

ANELISE BORGES: Can I start by asking your reaction to the decision of the Council of Guardians to prevent you from running? And your take on what the selection of candidates says about Iran today?

MAHMOUD AHMADINEJAD: First of all, allow me to greet you and your colleagues. And to those who will watch, listen to or read this program. People invited me to be a candidate this time. Large groups of people from all over the country insisted that I become a candidate and I accepted it. But for no particular reason, I was pulled. Today, I feel the responsibility to support the interests of the people and to reform the mechanism which left aside the will of a majority of the population.

ANELISE BORGES: You have already tried. Why did you want to become president again? What do you think your country needs right now and that you would be best placed to offer?

MAHMOUD AHMADINEJAD: As I mentioned, this time people asked me to be a candidate. Millions of people from all over the country came to my house and participated in rallies; letters and messages sent; insisted that I participate in the race. And so, to respond to the will of the people, I joined. But I think Iran, like other parts of the world, needs fundamental reforms – just like the United States of America, South America, Europe, Africa and Asia. All countries need fundamental changes to respect human rights. Iran, like these countries, also needs fundamental changes. And I will always try to go in that direction.

ANELISE BORGES: May I ask you for more details on these reforms? What exactly would you have put in place if you had had the chance to run for office?

MAHMOUD AHMADINEJAD: Sovereignty belongs to the people. And the principle is that people should be completely free to determine their destiny and their way of life.

Nowadays, because people have been disenfranchised, we are witnessing widespread poverty, growing inequalities, domination, war and strife between nations. The arms race is an insult to human beings. I think this situation needs to change. God created all human beings from the same principle. Our God is the same. We can speak to him in any language. We are all from the same family. We have to live together. Human beings were created for friendship, cooperation and love. They were not created for animosity and struggle and to plunder the wealth of others. The state of the world does not seem to be guided by the principles of humanity. I think we need to have fundamental changes in the world.

ANELISE BORGES: How do you see the outgoing administration? Do you think they have achieved anything positive in the past 8 years?

MAHMOUD AHMADINEJAD: We have to ask this question to the people. Polls show that the majority of people are dissatisfied with the government’s performance over the past eight years.

ANELISE BORGES: As we speak, one of the biggest legacies of the Rouhani administration is once again being negotiated: I am talking about the JCPOA. Do you think that negotiations should continue around the nuclear agreement?

MAHMOUD AHMADINEJAD: I think the current administration is far from reaching a conclusion. If the JCPOA were to continue in its previous framework, it would fail in advance. In every agreement, the balance between commitments and responsibilities must be respected by both parties. We don’t see this in the JCPOA. That’s why it didn’t solve our problems. This complicated the situation and made it more difficult to resolve. The JCPOA must respect international law, justice and mutual respect.

ANELISE BORGES: You talk about mutual respect; you also spoke of peace and progress; these were the objectives of the agreement.

MAHMOUD AHMADINEJAD: It’s not like that. Let me give you an example. In each agreement, there is a section designed to resolve disputes. But here, six countries are against Iran’s peaceful nuclear program. Under the JCPOA, dispute resolution must involve a council of seven countries. Each country has one vote and each subject needs seven votes to be approved. This means that the rights of the Iranian people will never be enforced in the treaty. It is against international laws and rights. When there is no balance, no deal can be successful. Mr. Trump unilaterally withdrew from the treaty and other countries were unable to stop him or continue with the rest of the treaty.

MAHMOUD AHMADINEJAD: Let me tell youâ€¦ We have a wish, but we don’t know if it is achievable. We would like the EU to come out of the shadow of the United States. Europe could have good relations with Iran. And the United States too. I believe cooperation is the main principle. The mechanisms of the last hundred years can no longer be maintained: I mean the framework in which some countries are superior to others. This period is over. We must speak and cooperate on an equal footing, with justice and mutual respect. No country should infringe on the rights of others. It would be beneficial for all countries. I tell you that the condition of the world is changing rapidly. Colonialism has reached its final stages. The tendency to believe that some countries are superior to others is coming to an end. It is against humanity. We must strive for friendship, understanding and equal rights. We have to manage the world all together. The imbalance between nations causes wars, arms races, social divisions and animosity. It makes the nations separate from each other. I believe we have to work together. We must be friends with equal rights. We are all human beings. Why are there differences between peoples? We like to have friendly and respectful relations with everyone, like Europe and America. Relationships based on justice. The superpowers have never been able to ensure the well-being of the people.

ANELISE BORGES: You talk about managing the world in peace, and finding peaceful solutions. It is not an easy task. Especially with regard to the speed at which politics is evolving at the moment and the dynamics of the region but also of the world at large. The United States now has a new administration. Do you think there is hope for renewed relations between the United States and Iran now that Joe Biden is president?

MAHMOUD AHMADINEJAD: There is certainly a way, but the condition is that we recognize each other. We must respect justice and mutual respect. Confrontation between countries is pointless. It’s the people who lose. Only capitalist groups benefit from it.

So yes, it is possible. But Mr. Biden must show that American policy has changed in concrete ways. As far as I know, American foreign policy is determined by powerful people behind the scenes, and American presidents don’t have as much power as we are led to believe. I hope fundamental changes will take place there. We would welcome this change – and I think all nations would welcome a fundamental change in US foreign policy. I remember when Mr. Obama was a candidate he promised to change these policies on several occasions and the nations welcomed him. But unfortunately, he broke his promise and missed the opportunity. I hope Mr. Biden will use this chance. I believe that the educated elites of the two countries will come together and solve the problems.

ANELISE BORGES: The whole world will be watching the count at the end of the week. What is your message to the rest of the world regarding Iran’s ambitions for the future?

MAHMOUD AHMADINEJAD: I think they should look at the Iranian people. They must respect the rights of other nations. Iran has a great people. Iran has a history, a culture and a civilization. Iran will overcome the problems it currently faces. No one should rely on Iran’s temporary problems to impose a problem on Iran or violate its rights. They should pay attention to the capabilities of the Iranians. In the future, nations will live together and run the world together.

ANELISE BORGES: I have one last question. Will you vote on Friday?

MAHMOUD AHMADINEJAD: I announced that I will not vote if there is no change in the decision of the Council of Guardians. I will not support anyone either.

The fishery and aquaculture market in Saudi Arabia is

I needed a break from the music