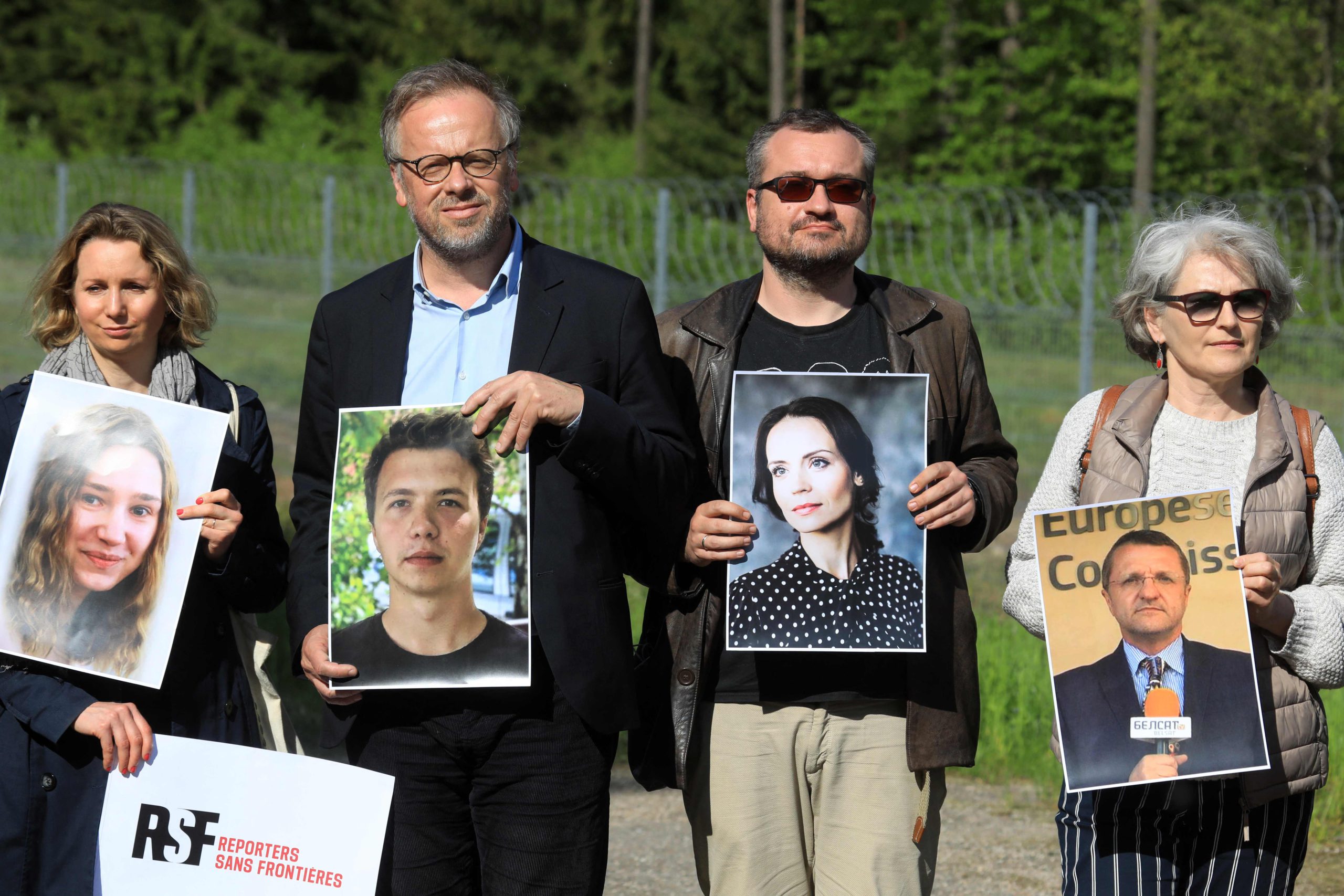 The university Lukashenko sent into exile

“If we continue straight over there, we will arrive in Belarus,” says Maksimas Milta, communication manager at the University of the European Humanities (UHE), pointing to one of the walls that surround the courtyard of the former Augustinian monastery, which serves as the seat – in the heart of the beautiful old town of Vilnius – of this Belarusian educational establishment, exiled for almost two decades in the Lithuanian capital. Teachers and students were forced to relocate to the EU country after authoritarian Belarusian leader Alexander Lukashenko ordered the closure of central Minsk in 2004, coinciding with the entry of the Baltic republic into the European Union . Here, Sofia Sapega, partner of dissident journalist from Lukashenko’s regime Roman Protasevich, was studying. The two were arrested on May 23 after a forced landing in the Belarusian capital of a Ryanair commercial plane in which they were returning from Athens to Vilnius.

The UHE is itself a metaphor for the long net of dissidents – politicians, intellectuals, activists or ordinary citizens who at one point dared to question the line of the Lukashenko regime – forced in recent years to leave Belarus, threatened by the leader who is known as “the last dictator of Europe”. Since the protests after the August 2020 elections claimed by Lukashenko despite allegations of fraud, the HEU has accepted 78 students and 16 academics expelled from its universities in Belarus for political reasons. In total, this small university has 680 students, 95% of whom are Belarusians.

For almost a year, more than 40 graduates of this university have been arrested in the former Soviet republic, explains Milta, the communication manager of the educational center. Most were held administratively for about 15 days, the mechanism originally used by the Lukashenko regime to respond to protests against them. However, some of these university students have not yet been released from Belarusian prisons. Besides Sapega, two other UHE students, Marfa Rabkova and Akihiro Gaevski-Hanada, as well as two former students, Mikalai Dziadok and Uladzimir Malakhouski, are still in prison and are considered political prisoners by the Belarusian Human Rights Center. man Viasna. All, Milta points out, have studied the same international law program as Sapega, a 23-year-old Russian citizen raised in Belarus, who in a few weeks is due to present her final diploma project within the thick walls of the old monastery. has survived so many political battles in its three centuries of history.

The UHE was inaugurated in 1992 in Minsk, just one year after the dissolution of the Soviet Union and two years before Lukashenko came to power, with the aim of “creating an independent university that would support the resurgence of the values â€‹â€‹of European civilization. during the period of transition from totalitarianism to democracy â€, according to the statutes of the University. Its mission: â€œTo train the new generation of young professionals capable of leading Belarus on the path of civil society. With such ambitions, it is not surprising that he quickly meets a leader of the Soviet school and an avowed admirer of Joseph Stalin. Its closure, decreed in 2004, was a “personal decision” by Lukashenko, underlines Milta, one of the rare workers of the HEU who tread these days the center, since since the beginning of the pandemic the courses are given to distance.

This is how Zmicier Mazura has followed them since arriving in Vilna last November and enrolling in the same law program as Sapega. The 21-year-old also spent 38 days in prison last year for his political activism against Lukashenko. He says he was kidnapped by Belarusian security agents as he was about to enter the metro in his hometown of Minsk after classes at the State University of Informatics and Radioelectronics, where he was expelled for having been one of the organizers of the strike committee. of his faculty. Mazura says he feels â€œanger and sadnessâ€ at the arrest of his partner Sapega who, he warns, is in serious danger. â€œThe situation is worse now than in November. Now people who are not activists, who have done nothing, are sentenced to several years in prison, â€he said.

The University issued a statement as soon as it learned of Sapega’s “unwarranted” detention, demanding her “immediate release” and calling on international organizations to “help free Sofia”. Belarusian authorities accuse the young woman of having disseminated “personal data” of members of the police, a serious crime in the former Soviet republic which could lead to up to 15 years in prison. His treatment was postponed on Monday. “It does not make sense, it’s incredible, there is no possibility of assigning these responsibilities to him, it simply does not correspond to his personality”, assures Milta, who assures that in this small university all the world knows each other. He defines her as a “very disciplined student, very focused on her studies” and without political ambitions; that she had accompanied her boyfriend to Athens to rest a little before presenting her thesis, without further intention. The young woman’s mother, Anna Dudich, told the EFE news agency in London last week: â€œI don’t understand why my daughter was detained. She is simply living her life as a normal young woman. She studies, has fun and is in love. Nobody banned this, right? I just don’t understand. “

No one at HEU dares to venture out when SofÃ­a Sapega can return to Vilna to graduate. In an attempt to cheer himself up, student Zmicier Mazura says he is “100% confident” that the Lukashenko regime “will not survive” the five years left to obtain his law degree. As soon as he graduates, he assures us, he will return to Belarus to “build a new, more democratic country”. His dream is to work as a lawyer or assistant to the prosecution, to make the Belarusian judicial system, the one that now appeals to so many young people like Sapega or her boyfriend Protasevich “once again fairer”.

Disclaimer: This article is generated from the feed and is not edited by our team.